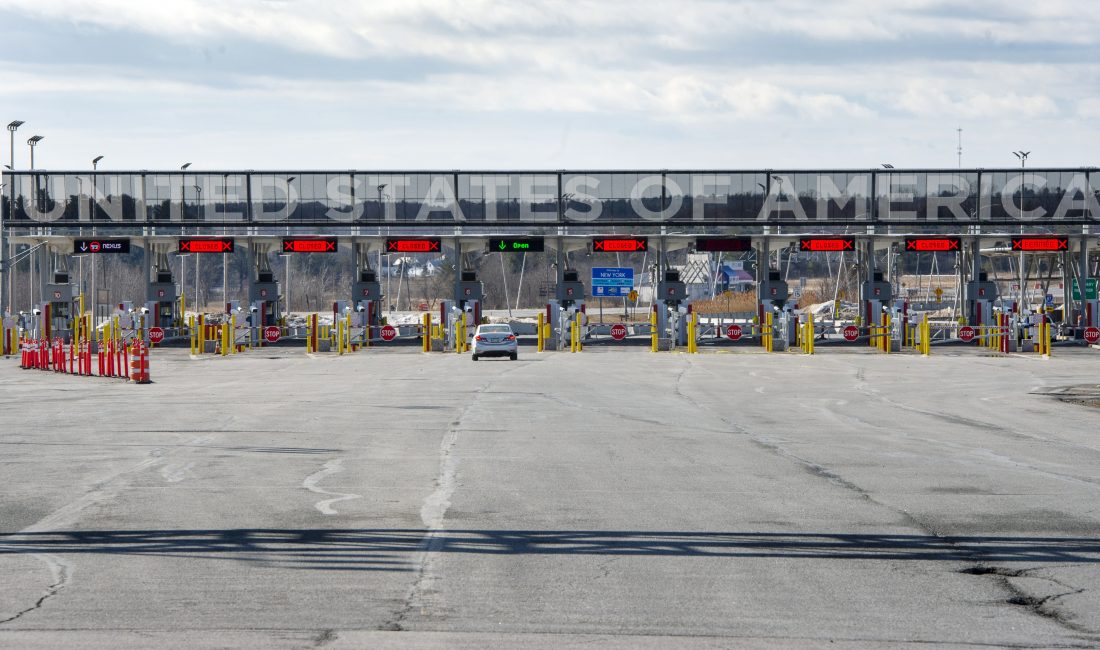 ap photo A vehicle approaches the only open lane at the United States border crossing in Lacolle, Quebec, Wednesday. The Canada-U.S. border will be closed to non-essential traffic in both directions “by mutual consent,” President Donald Trump confirmed Wednesday, as efforts across the continent to contain the widening COVID-19 pandemic continued to upend daily life in North America.

MINNEAPOLIS — President Donald Trump on Wednesday invoked emergency authority to marshal industry to fight the coronavirus, as the economic fallout from the crisis mounted with word that nearly the entire U.S. auto industry is shutting down its North American factories to protect workers.

On a day of head-spinning developments:

• Stocks tumbled again on Wall Street on fears of a prolonged recession, falling so fast they triggered another automatic trading halt. The Dow Jones Industrial Average shed more than 1,300 points, or over 6 percent, and has now lost nearly all of the big gains it had posted since Trump’s inauguration. Oil dropped below $21 per barrel for the first time since 2002.

• More borders slammed shut across Europe and North America, with the U.S. and Canada closing their boundary to all but essential travel and Trump saying he plans to assert extraordinary powers to immediately turn back to Mexico anyone who crosses over the southern border illegally.

• The White House pressed Congress to swiftly pass a potentially $1 trillion rescue package to prop up the economy and speed relief checks to Americans in a matter of weeks.

Calling himself a “wartime president,” Trump invoked the Defense Production Act of 1950 to steer industrial output and overcome shortages of face mask s, ventilators and other supplies as hospitals brace for an expected onslaught of cases.

The Korean War-era law gives the president extraordinary authority to compel industries to expand production and turn out vital materials. It was most recently used after the 2017 Puerto Rico hurricane to speed up contracts for food and other necessities.

“It’s a war,” Trump said, likening the anti-coronavirus efforts to measures taken during World War II and warning of national sacrifices ahead.

The virus has infected more than 200,000 people worldwide and killed over 8,700. The United Nations warned that the crisis could lead to the loss of nearly 25 million jobs around the world.

Theodore Peck, who owns a Brooklyn coffee shop and bakery, was in quarantine at home as a precaution when New York City this week ordered all bars and restaurants to close except for takeout. He had to shut down his business and lay off all his workers.

“My life’s work is being … you know, destroyed, like picked over,” he said. He lamented that he didn’t even get the chance to say goodbye to 22 of his employees.

Around the globe, officials took increasingly drastic measures to fight the epidemic and the threat of a recession, in some cases using emergency powers.

California’s governor warned that martial law could be imposed. The mayor of New York said the city’s 8.6 million residents should be prepared for a lockdown. Czech authorities used emergency powers to raid a warehouse and seize hundreds of thousands of face masks. And Hong Kong widened the use of electronic wristbands that monitor people under self-quarantine.

With a growing number of Americans thrown out of work by the near-shutdown of much of the U.S. economy, Trump also said the Housing and Urban Development Department will suspend foreclosures and evictions from public housing.

The Trump administration’s plan for issuing relief checks to Americans calls for the payment of $500 billion in two installments over the next two months. The amounts have yet to be decided but would be based on income and family size.