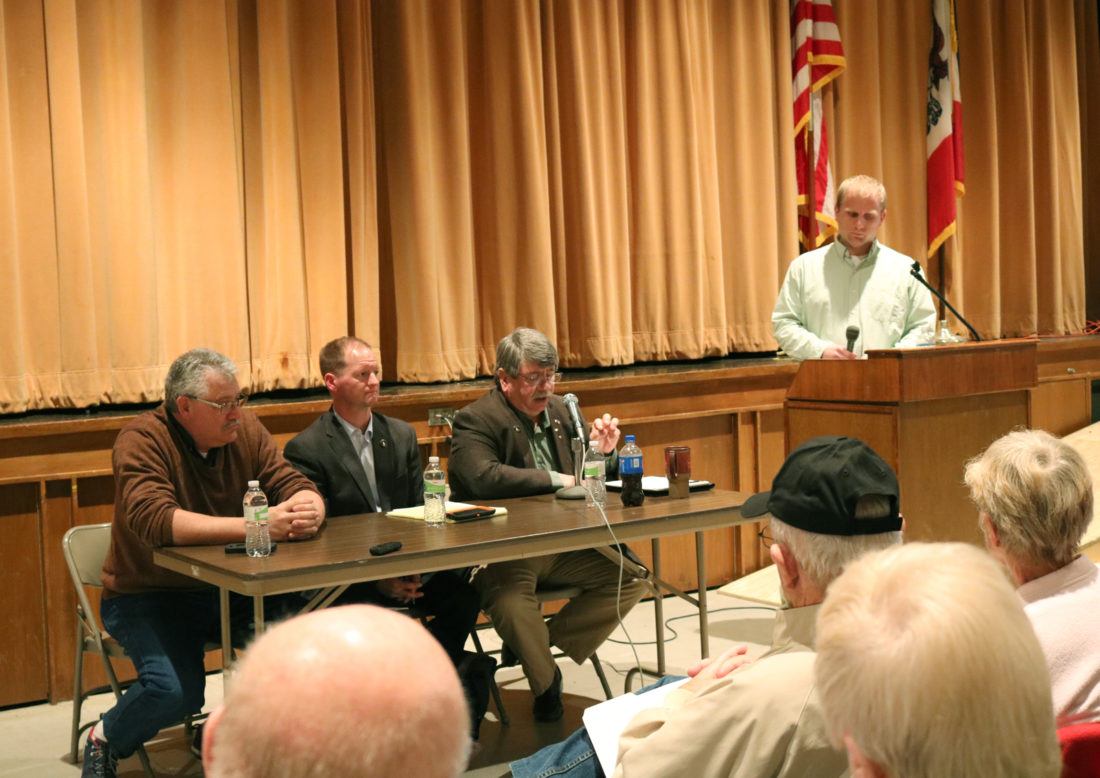 T-R PHOTO BY ADAM SODDERS Area lawmakers faced questions on the budget, the economy and fireworks at a Marshalltown Area Chamber of Commerce public forum Friday at Fisher Community Center.

The state legislative session appears to be winding down, and setting the state’s budget is one priority for lawmakers, and there are decisions to be made on certain bills.

“We’re shooting for April 18th to finish up,” said state Rep. Dean Fisher, R-Montour, of the end of the session. “The way I look at this session is as a year of reform.”

Area lawmakers and members of the public gathered for a legislative forum hosted by the Marshalltown Area Chamber of Commerce Friday afternoon.

“In my memory this is the latest we’ve received budget targets,” he said, adding the state Senate and House of Representatives so far have very different budget proposals of their own drawn up. “There is a difference in the amounts that both of them are proposing.”

The House Minority Leader also said the plan for the next fiscal year is to take $131 million out of the state’s cash reserve fund to cover for poor Iowa Revenue Estimating Conference (REC) budget estimates.

“The goal is to pay that back over two years,” he said. “It looks like somewhere between $20 million and 30 million will be paid back in the first year, which causes concern for the second year.”

State Sen. Jeff Edler, R-State Center, said the budget has been as well-managed this session.

“On the budget, what is being appropriated this year is actually about $100 million less than the original FY 17 budget,” he said, adding it was good that state supplemental aid to public schools was passed early in the session.

“The election integrity bill is coming back to the house with some changes from the Senate,” Fisher said, referring to House File 516, adding it will likely come to debate next week.

Smith said HF516, which he called “the voter suppression bill,” may be slowed up in the House.

“We addressed that yesterday and found in the Senate version about 5 different implementation dates in the bill,” he said. “Therefore, the House Republicans deferred on that bill until next week.”

Also mentioned by Fisher was HF571, a bill he sponsors which would see confidentiality concerning medical information in 911 calls. He said the bill should be up for debate in the near future.

Edler said he’s “happy” to see a legislation allowing flexible spending for public schools moving, and said it should be up for debate in the Senate “shortly.”

Some of the most contentious discussion at the forum concerned the “fireworks bill,” Senate File 489, which would legalize retail fireworks sales in Iowa between the dates June 1 and July 8, and again between Dec. 10 and Jan. 3.

When asked about why the long-standing law banning fireworks sales needed changing, Edler and Fisher argued many Iowans cross state borders to purchase fireworks and bring them back to the state.

“We’ve heard from our constituents, the vast majority of them want it,” Fisher said of the legalization.

Edler, a former volunteer fireman, said despite condemnation of the bill from the Iowa Fire Marshals Association and the Iowa Association of Professional Fire Chiefs, many individual firefighters in his district have said they support the legislation.

“The fireworks bill, which I vehemently oppose is still a possibility,” Smith said. “Both sides (political parties) use polling when it’s to our advantage and discount it when it’s not to our advantage, and there has been a poll that shows the majority of Iowans want legalization of fireworks.”

Smith went on to say those sentiments may change after such legislation passes and possible injuries and accidents occur due to increased fireworks use. He also said some of his constituents worried about noise disturbances if fireworks were to be legalized.

The lawmakers said many of the bills on the table in both chambers have to do with budgeting rather than policy as the session’s end draws closer.

With poor REC numbers of late and worries about the state economy, especially the agriculture economy, Edler said one key to economic development is making Iowa’s tax code more competitive.

“We know right now we do not have a competitive tax environment for business, and it’s not very competitive for personal taxes either,” he said, adding tax credits may soon be eliminated. “If they haven’t been working, we’re trying to take steps to get rid of those.”

“I think tax credits are always needed, what we need to have accompanying them is an accountability, and we haven’t had as much accountability as I think we should have,” he said.

“We’re not really interested in increasing taxes,” he said. “The revenue problems we have now are a result of our ag economy, which is extremely important to Iowa, being down.”

Edler argued a more competitive tax code would bring in more businesses and reduce the state economy’s reliance on the ag sector.

“If you have a competitive environment for business to thrive, you’ll bring in businesses, thus expanding your revenue,” he said. “We need to take a hard look at expanding the portfolio of business in Iowa so we might not be quite as reliant on just the ag economy.”

Smith said he disagreed with Edler’s view on the tax code.

“The theory has been for quite a while that if you do certain things that lower the cost of doing business in Iowa, that we’re going to bring businesses into the state,” he said. “We’ve not seen that be the case.”

Several bills, both on policy and on the budget, are expected to be debated in both chambers next week.

To keep track of state legislation, go to www.legis.iowa.gov