Learning to be leaders 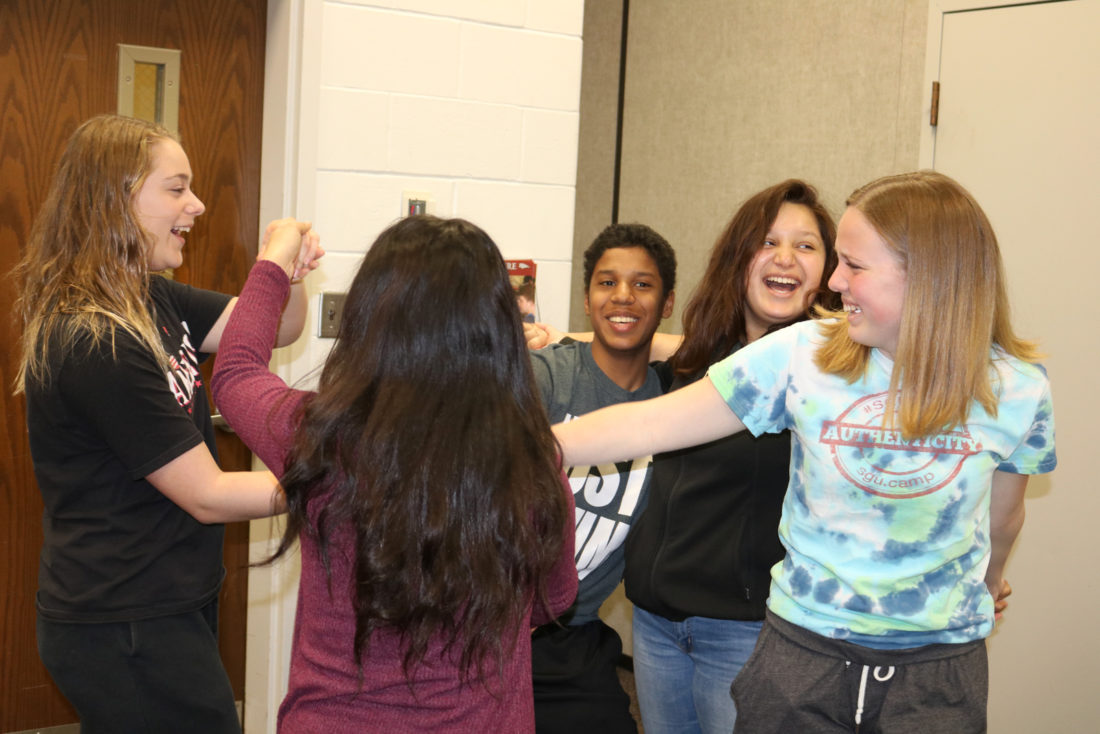 T-R PHOTO BY ADAM SODDERS “The human knot” was one team-building activity MHS students had a lot of fun doing during Wednesday’s MVP Summit. The game is designed to teach cooperation and communication.

A changing of the guard took place among a group of Marshalltown High School students Wednesday, and that new guard will work with freshmen and take steps to reduce violence of all kinds.

“It stands for Mentors in Violence Prevention, and this is the second year we’ve implemented it into our freshman homerooms,” said MVP advisee and MHS English teacher Laurie Rink of the violence prevention and leadership summit that took place at Marshalltown Community College.

She said the goal of the summit was to have upperclassmen mentors help teach a group of underclassmen how to engage and mentor incoming freshmen.

“That’s our weakest point, so we’re focusing hard and heavy on that,” Rink said.

Participating students signed up for various “classes” set to take place through the morning and early afternoon. The topics covered included “Pillow talk,” which was focused on women in society, “Masculinity 101,” in which the concept of masculinity was discussed in a societal and personal context, and a class focusing on the Family Educational Rights and Privacy Act (FERPA) and confidentiality between mentors and freshmen.

Team-building was the central focus of the other two sessions, and those classes were led by senior mentors.

“It was very engaging,” said MHS sophomore Cale Wilson of the team-building session. “It was just fun to be there and learn.”

“It helped (inform) on how to approach them,” she said, adding she learned strategies for getting past awkward situations in the home room environment.

Among the team-building activities the students participated in was the “human knot” cooperative game. Students split into small groups and formed a tight circle. Each student took the hand of students across from them and had to work together to extricate themselves without breaking contact.

“Our whole goal is to prepare them (freshmen) for the future,” said MVP President and senior mentor Morgan Van Staalduine, adding freshmen can talk about serious topics in confidence with their mentors.

MPV Officer and senior Kobe Sandoval said social media, movies and other media may desensitize some students to certain forms of violence, including sexual violence and bullying, and added the mentoring program helps tell freshmen “This isn’t OK, and this is how you address it.”

The program also aims to give students tools to prevent or intervene in violent situations.

She added there are now students who were mentored as freshman reaching the age where they can become mentors.

“The exciting part is some of these kids have been there as freshmen, so now they’ll have been at both ends of that spectrum,” Rink said. “I hope that’ll make them better mentors.”