McKibben to seek Board of Regents presidency

Current board member, former senator says budget may be a challenge 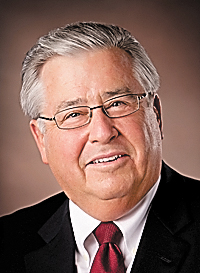 After serving for four years on the Iowa State Board of Regents, Marshalltown’s Larry McKibben announced Thursday his intention to seek the board presidency.

“I announced it at the end of the (Board of Regents) meeting,” he said of the Thursday afternoon meeting held in Council Bluffs. “It was a recent decision.”

With both Board President Bruce Rastetter and President Pro Tem Katie Mulholland departing, McKibben said he has what it takes to lead the board.

“It’s an unusual year this year,” he said. “If you go back in history, it’s hard to find a time when you lost both your president and your president pro tem.”

McKibben said many factors played into his decision to run for the position.

“I decided I had two years left on the board, I have four years of experience, and maybe it’s my time to lead,” he said, adding there are several younger members on the board he hopes to help guide to leadership. “I really felt like I had the skill set to help train the new generation of leaders.”

The former Republican state senator added he has good working relationships with many state legislators, another reason he said he is the right person for the position. He also said there are challenges on the horizon for the board of regents.

“We’re coming into a time where it’s going to be really budget difficult,” McKibben said, adding he has led the Transparent and Inclusive Efficiency Review (TIER) since 2013. “We’ve made tremendous progress.”

He said one example of the importance of TIER is the $2.5 million in savings that the University of Iowa will use to cover a part of recent reductions in state funding.

McKibben said the campaign is a short one, only 10 days, but said he’s ready to lead.

“May 1 comes in a hurry,” he said. “It’s a real opportunity for me to do something good for the board.”