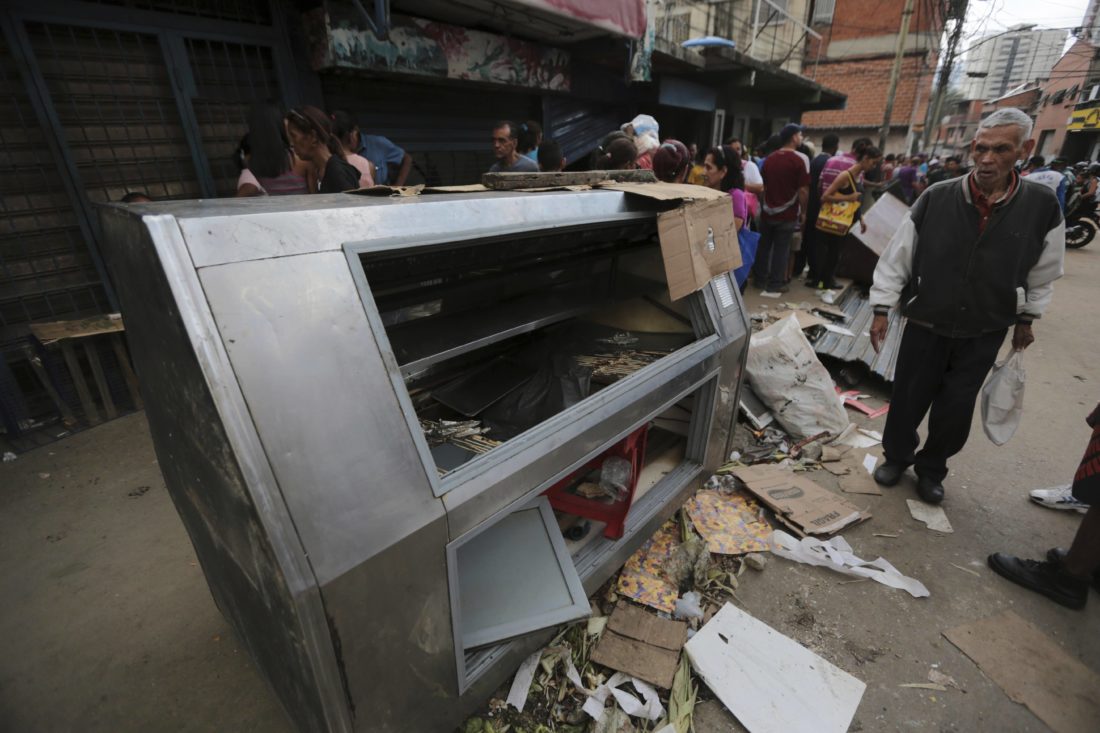 AP PHOTO A pedestrian stands next to a refrigerator destroyed in a night of looting, in El Valle neighborhood in Caracas, Venezuela, Friday. At least 12 people were killed overnight following looting and violence in Venezuela's capital amid a spiraling political crisis, authorities said Friday.

CARACAS, Venezuela — At least 12 people were killed overnight during looting and violence in Venezuela’s capital amid a spiraling political crisis, authorities said Friday.

Most of the deaths took place in El Valle, a working class neighborhood near Caracas’ biggest military base where opposition leaders say a group of people were hit with an electrical current while trying to steal a refrigerator from a bakery.

Two days of huge protests on the streets of Caracas against the socialist government of President Nicolas Maduro spilled into a violent Thursday night in several parts of the city, with residents in El Valle witnessing repetitive gunfire, street barricades set aflame and more than two dozen businesses looted. Amid the confusion, mothers and newborn children had to be evacuated from a maternity hospital named after the late leader Hugo Chavez when it was swamped with tear gas.

The Public Ministry said the violence left 11 people dead in El Valle, all men between the ages of 17 and 45. Another death was reported east of Caracas in El Sucre. Six other people were injured.

“This was a war,” said Liliana Altuna, whose butcher shop was ransacked by looters armed with guns who grabbed everything in sight.

Opposition leaders accused the government of repressing protesters with tear gas and rubber bullets but standing idly by as businesses were looted. Meanwhile, Foreign Minister Delcy Rodriguez pointed the finger at the opposition, saying armed groups controlled by the government’s foes were responsible for the attack at the hospital.

“We reject and do not accept those irresponsible declarations,” said Henrique Capriles, a former opposition candidate for president who the government recently barred from running for public office.

Overall, at least 20 people have been killed in the unrest that erupted after the government-stacked Supreme Court gutted congress of its last vestiges of power three weeks ago — a move later reversed amid a storm of international criticism. Angry protesters are demanding new elections and denouncing a government they deem a dictatorship responsible for triple-digit inflation, soaring crime and widespread shortages of food and medical supplies.

The violence began Thursday night and stretched into Friday in El Valle, an area historically known as a hot spot for political protest. Witnesses said masked looters wielding knives and guns descended on an area known as “the little market” filled with bakeries, supermarkets and butcher’s shops.