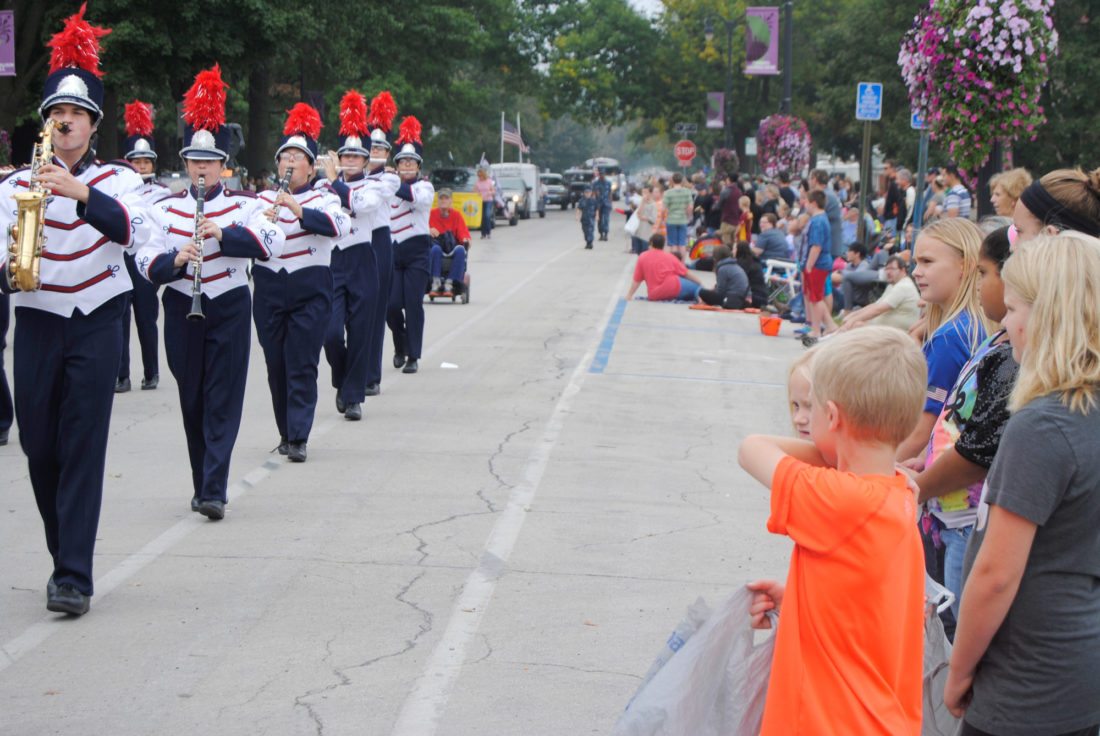 T-R FILE PHOTO Children watch intently as the Marshalltown High School Bobcat Band marches on Main Street during last year’s Oktemberfest parade. Each year, thousands of spectators of all ages and from various Central Iowa locales line the route in anticipation of the 10 a.m. Saturday start.

Weddings do not have exclusivity on “something old, something new.”

The 2017 Oktemberfest all-volunteer committee has taken the old adage to heart in planning this year’s festival.

Fittingly, “Blazing New Trails” is the theme, with a bigger and robust version debuting Thursday and running through Sunday.

The board worked aggressively with dozens of area partners to combine many new attractions with old favorites while keeping the Oktemberfest tradition of being family-friendly and inexpensive.

Oktemberfest President Jenny Hart conveyed the team’s enthusiasm in a recent interview with the Times-Republican.

“We are doing quite a few new things because (Marshalltown High School) Homecoming is on the same weekend as Oktemberfest,” she said. “For example, Thursday night’s Homecoming Parade at 6 p.m. down Main Street will be the first of two parades, with Saturday’s grand parade at 10 a.m. the second.”

Including the Homecoming Parade is but one new item, with many more to greet attendees.

“We have incorporated Color Blaze since Oktemberfest is a family-friendly festival,” said Hart. “We want kids to participate with their parents. It begins Saturday at 1 p.m. and is a 3.3 mile run, but there is a one-mile route too. One may register online at Oketemberfest.com and pick up packets Friday night or Saturday at the Courthouse.”

However, tradition will reign from 5-6 p.m. Thursday with the crowd-pleasing crowning of Little Miss and Mr. Oktemberfest.

The young royalty are chosen by random drawing.

It will be here KFJB-KXIA radio personality Kyle Martin makes his Oktemberfest debut as festival emcee.

Martin replaces Denny Grabenbauer, who announced early last year the 2016 Oktemberfest would be his last after being active for many years.

“I’m excited about replacing Denny as emcee,” said Martin, a recent inductee of the Iowa Rock n’ Roll Hall of Fame. “Denny was such an Oktemberfest institution, I’m honored to be his replacement!”

Grabenbauer began helping with Oktemberfest during its formative years, while an announcer at Marshalltown Speedway.

“The Voice of Marshalltown” will be joined in the parade by wife, Barb.

“I was honored to be asked to be grand marshall,” said Grabenbauer. “I always had so much fun at Oktemberfest … it was never work … and always a thrill to entertain folks.”

Grabenbauer said he looks forward to surprising parade-watchers with an eye-catching outfit.

“Wait to you see what I have planned.”

In addition to Grabenbauer, other Oktemberfest favorites such as the Classic Car Show, All One Can Eat Kiwanis Pancakes and the Motorcycle Show & Rodeo return and have prominent placement.

Music lovers will have multiple selections, as “Meet the Beetles” tribute band makes its Marshalltown debut Friday night at the Courthouse stage followed by free live bands Saturday also at the Courthouse Stage.

Metallica fans can look forward to “One” advertised as: The only tribute to Metallica.”

They headline Saturday from 8-10 p.m.

“I think the best way to sum up Oktemberfest is community pride,” Grabenbauer told the T-R. “It’s just neat for me to say I’ve been a part of it.”

Oktemberfest is a pet-free event as per Marshalltown City Council ordinance.