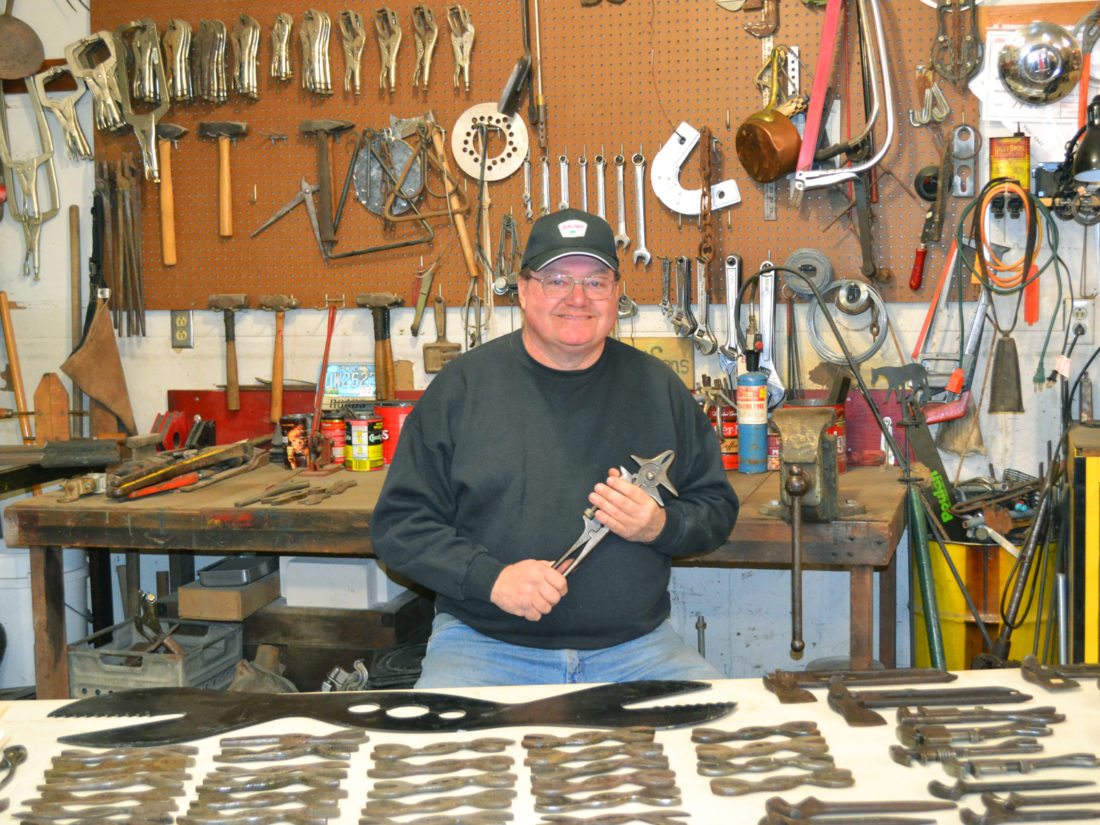 Bill Roads of Haverhill has an impressive collection of thousands of antique tools and related farming and manufacturing implements. He favors equipment that was once made in Marshalltown, and ones designed by John R. Morris, his wife Judy’s great-grandfather, who was a famed industrialist. He’s pictured holding the “Morris Wrench” the favorite piece in his collection.

Editor’s note: This is part of an occasional series profiling the various personal collections of residents of Marshalltown and the surrounding area.

A retired mechanic, he has decades of experience working on cars, trucks and airplanes. He served in the U.S. Army from 1973-80 and was an aircraft structural mechanic in the Iowa National Guard.

“I’ve worked on everything but locomotives,” he said.

As a blacksmith with 30 years experience, he does demonstrations at the nearby Matthew Edel Blacksmith Shop and at the Iowa State Fairgrounds. At his Haverhill residence, drawers, tubs and shelves are chock full of these various relics.

“I’ve always liked tools, but what really got me interested in collecting, 25 years ago, was when we learned my wife Judy was related to [industrialist] John R. Morris, who came to Marshalltown in 1908 to work for the Marshalltown Drop Forge, Co.,” he explained.

Once Roads found out his wife’s family was related to one of his favorite toolmakers, he set out to learn everything about Morris and his line of products. Morris secured two patents during his time in Marshalltown, one for a wrench, and the other for a pipe wrench. He had a daughter, Clara Morris Lowry.

“It’s a circle. His interest came back around to my relative,” Judy said. “I know it always meant a lot to my mother (Evelyn Lowry Roy).”

Of all the items in Roads’ collection, the piece he treasures most is the 1911 “Morris Wrench.”

“It was a multi-purpose tool. It has a pair of pliers, an alligator wrench, the other side has a monkey wrench, and there’s a middle for cleaning threads on bolts, and a pry bar,” he noted.

To the untrained eye, many of his antique wrenches look very much alike. But Roads knows the backstory on each, and can point out the nuanced differences.

“I have about 1,000 wrenches,” Roads said. “I make the claim that I have the world’s largest collection of multi-wrenches — 155 of them. Those were a little Chinese import wrench, and not good quality, but they’re cheap and easy to find.”

As a native of Marshall County, having resided in Haverhill for over 30 years, Roads is very interested in the implements once manufactured in Marshalltown.

“I like Marshalltown’s industrial history,” he said. “It had the railroad coming through and the Lincoln Highway too. You can’t go anywhere in the United States and not find something that was manufactured in Marshalltown.”

Some of the memorabilia he collects of companies that once had facilities in Marshalltown include: Hawkeye Wrench Co., Dunham-Bush, Williams Bros., Marshall Oil Company, Marshalltown Trowel Company, V-Ray Company, and Tungsten Mfg. Co.

“If it has Marshalltown on it, I have a bad habit of buying it,” he said.

Roads also has many pieces belonging to other regional and national companies, including International Harvester, Bonney Tools, and

Buffum Tool Company. The Buffum wrenches bear a marking that stirs emotions in some who view them. Its logo was the swastika cross.

“They used the symbol long before it was associated with Adolf Hitler,” Roads explained.

Accumulating a sizable collection requires various purchasing outlets. Roads shops on eBay, at flea markets, swap sales and auctions. He makes copies of patent information stored at the Historical Society of Marshall County. He connects with other collectors as a member of the Mid-Iowa Antique Power Association, Midwest Tool Collectors Association, and the Missouri Valley Wrench Club.

“I will be hosting the Missouri Valley Wrench Club’s convention Oct. 19-20, 2018 at the Best Western Regency Inn,” Roads said. “I will be putting a lot of my stuff for sale.”

“That would be a Cooper-made wrench from 1913 (made in Marshalltown),” he said. “You can usually find the handle, but it’s rare to find it with all four jaws.”

He keeps it in a shadow box along with a copy of the patent.

One item he is still seeking for his collection is a combined walking cane and horse whip, made by Morris in 1906.

While Roads doesn’t use any of his antique tools, he does still enjoy using modern-day pieces to work on his International Harvester motors and on an electric power plant from Kohler. He is dedicated to preserving the history of vintage equipment and related artifacts.

“We’re trying to teach our three grandkids the history,” Judy said. “Bill will leave some of the tools laying around our property, and the grandkids get excited when they find them, and want to ask him how they were used.”

Roads and his wife operate Pickers Emporium, located on their property at 3 Main St. in Haverhill. Described as “farm primitive,” they travel the area “picking” for unique finds. To learn more, the Roads may be reached at: 641-485-4557. Please leave a message.

If you collect something interesting or unusual, contact this writer at the information below.