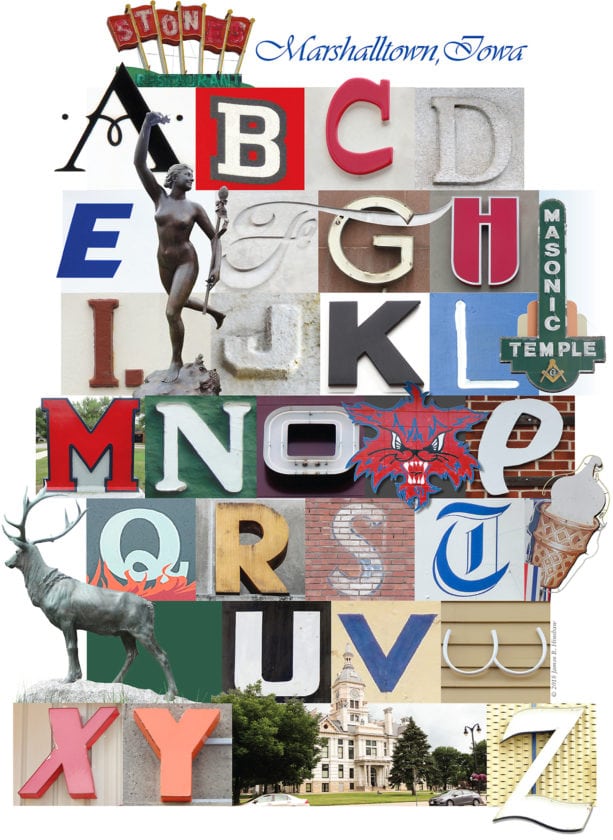 CONTRIBUTED PHOTO - This alphabet is made up of photos of letters from various signs across Marshalltown. It was created prior to the July 19 tornado by Marshalltown High School Class of 1978 member James Hinshaw. Now, the class is selling posters of the Marshalltown alphabet to put money toward tornado relief. Posters can currently be purchased at Calvin Rockett Bar and Grill, 2013 S. Center St., and Act II Consignments, 126 E. Main St.

From the “O” of the IVCCD Orpheum Theater Center to the “X” of Lennox Industries, a group of Marshalltown High School alumni are selling posters featuring the alphabet made from photos of letters around Marshalltown.

The artwork was created before the July 19 tornado for members of the MHS Class of 1978, but the storm brought a change of plan.

“I was visiting my mom in town and I thought that this would be kind of a fun thing, she and I could drive around town and look at all of these landmarks and I could take pictures and make a poster out of it,” said MHS graduate and graphic designer James Hinshaw, who now lives in Austin, Texas. “It just so happened I finished it maybe two days before the tornado hit.”

The Class of ’78 had been planning a reunion at that time in mid-July. The idea to sell the posters to raise money for tornado relief came when class members met to re-schedule the reunion.

“We asked (Hinshaw) if we could use it as a fundraiser,” said fellow class member and Lenihan Intermediate School teacher Laura Fricke. “Our first batch of posters is coming from Dallas … the first batch is a donated batch.”

She said the group will have to order more soon, and they plan to get the posters made in the Marshalltown area.

“A lot of the fun of it was just going around town and searching places I grew up knowing,” Hinshaw said.

Fricke said the poster not only highlights several Marshalltown landmarks, but serves as a reminder of some of the pieces of the town damaged or changed in the tornado. Along with the letters, the poster is decorated with photos of the undamaged Marshall County Courthouse, the Masonic Temple building, statues and more.

The posters are available for $20 each, with framed posters being sold at $35.