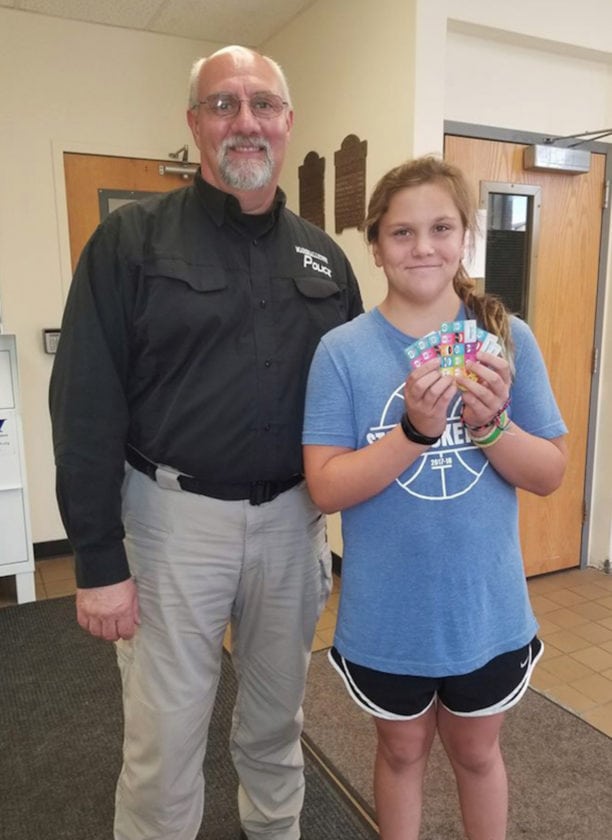 Every year, Peyton Van De Walle, 12, of Chelsea hosts her own lemonade stand at the Chelsea Car Show with the goal of raising money for a charity. After the July 19 tornado, she decided people in Marshalltown could get the most use out of the funds.

“Usually every year I do something, ever since the lady that was in Chelsea got hit by a train. My friends, who are her family, we did a lemonade stand for her funeral, then started to do one for the car show,” Peyton said. “I was going to do St. Jude’s this year, but then I realized about Marshalltown.”

Peyton was aided in her efforts by friends Olivia Bradley, Vanessa Veit, Isabel Bejar, Valery Avalos and Cale Dvorak. A total of $400 was raised, which then went to purchase eight $50 gift cards to Walmart. Peyton and her mother Amy Walters decided to give the gift cards to the Marshalltown Police Department.

“Peyton told me she felt the best way for the gift cards to be handed out was by the officers out on the street. They see who is out there and who needs help the most,” MPD Cap. Michael Hanken said. “She is a remarkable, caring young lady who puts the needs of others before her own. To watch and listen to Peyton as she spoke, you could see and hear the compassion and genuine concern for others that she has.”

Walters said she approached a friend at the MPD about making the donation.

“I wasn’t sure what we wanted to do with the money, or where we wanted to take it in Marshalltown, and she said there were people (giving out gift cards). The police can hand them out to the families,” Walters said.

“Peyton is a shining example of not only ‘Iowa Nice’ but of how we should all strive to be,” Hanken said.