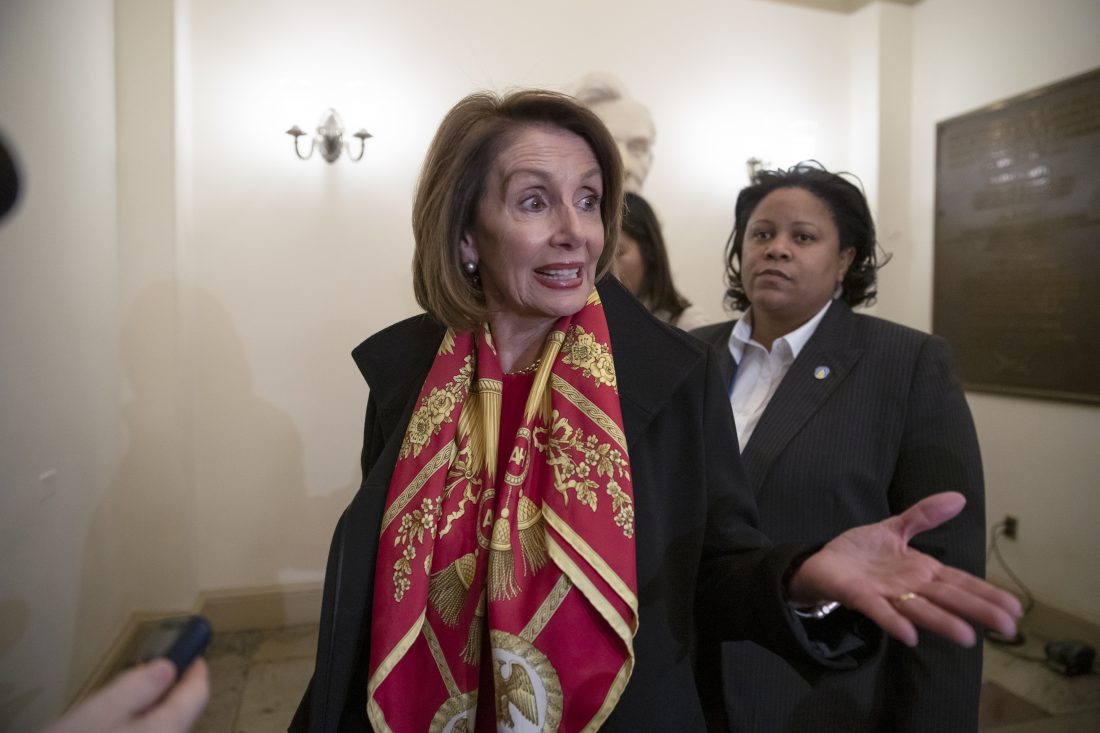 Speaker of the House Nancy Pelosi, D-Calif., responds to reporters after officially postponing President Donald Trump's State of the Union address until the government is fully reopened, at the Capitol in Washington, Wednesday, Jan. 23, 2019. The California Democrat told Trump in a letter Wednesday the Democratic-controlled House won't pass the required measure for him to give the nationally televised speech from the House floor. (AP Photo/J. Scott Applewhite)

WASHINGTON — In a high-stakes case of dare and double-dare, House Speaker Nancy Pelosi served notice Wednesday that President Donald Trump won’t be allowed to deliver his State of the Union address to a joint session of Congress next week. She took the step after Trump said he planned to show up in spite of Democratic objections to the speech taking place with big swaths of the government shut down.

Denied that grand venue, Trump promised to come up with some sort of alternative event. But the White House was scrambling to find something matching the gravitas of the traditional address from the rostrum of the House to lawmakers from both parties, Supreme Court justices, invited guests and a television audience of millions.

“I think that’s a great blotch on the incredible country that we all love,” Trump said. “It’s a great, great horrible mark.”

Fireworks over the speech shot back and forth between the Capitol and the White House as the month-long partial government shutdown showed no signs of ending and with about 800,000 federal workers facing the prospect of going without their second paycheck in a row come Friday.

Pelosi told Trump the House won’t approve a resolution allowing him to address Congress until the shutdown ends. Trump shot back that Pelosi was afraid of hearing the truth.

The drama surrounding the State of the Union address began last week when Pelosi asked Trump to make other plans but stopped short of denying him the chamber for his address. Trump called her bluff Wednesday in a letter, saying he intended to come anyway.

“It would be so very sad for our Country if the State of the Union were not delivered on time, on schedule, and very importantly, on location,” he wrote.

Pelosi quickly squelched the speech, writing back that the House “will not consider a concurrent resolution authorizing the President’s State of the Union address in the House Chamber until government has opened.”

The president cannot speak in front of a joint session of Congress without both chambers’ explicit permission. A resolution needs to be approved by both chambers specifying the date and time for receiving an address from the president.

The gamesmanship unfolded as the Senate prepared to vote this week on dueling proposals on the shutdown. A Republican one would give Trump money for the wall while one from Democrats would re-open government through Feb. 8, with no wall money, giving bargainers time to talk about it.

Both proposals were likely to fail to reach the 60-vote threshold needed in the Senate, where Republicans hold a 53-47 majority. As well, House Democrats were putting forward a new proposal, aiming to lure Trump away from his demand for a border wall by offering billions of new dollars for other border security measures.

The Constitution states only that the president “shall from time to time give to the Congress Information of the State of the Union,” meaning the president can speak anywhere he chooses or give his update in writing. The address has been delayed before.

Ronald Reagan’s 1986 State of the Union address was postponed after the Challenger space shuttle exploded in flight on Jan. 28 of that year.

But there is no precedent for a State of the Union invitation being rescinded.

Presidents Harry Truman, Dwight Eisenhower and Jimmy Carter issued their final messages in print. As Eisenhower recovered from a heart attack in 1956, he prepared a seven-minute, filmed summary of the message from his retreat in Key West, Florida, that was broadcast nationwide. Richard Nixon sent a printed message in 1973; his staff said an oral message would have come too soon after his second inaugural address.

White House officials have been working on a backup plan to have Trump give the speech somewhere else if Democrats blocked access to the House chamber. Nevertheless, they were rattled by Pelosi’s move Wednesday and expressed concern it would further sour shutdown negotiations.

Officials have been considering alternative venues, including a speech in the Senate chamber and a visit to a state on the southern border. Multiple versions of the speech were being drafted to suit the final venue. Trump has been presented with a series of options for making the address and is expected to decide within the next day or so, said a person familiar with White House discussions but not authorized to speak publicly about them.

Pelosi said that when she extended her Jan. 3 invitation to Trump to deliver the State of the Union address on Jan. 29, there was no thought that the government would still be shut down.

She wrote Wednesday: “I look forward to welcoming you to the House on a mutually agreeable date for this address when government has been opened.”

Moments after her letter became public, Trump told reporters he wasn’t surprised by Pelosi’s action. Democrats have become “radicalized,” he claimed. He expanded on those sentiments during a subsequent event at the White House, calling the cancellation a “disgrace” and asserting that Pelosi didn’t want to hear the truth about the need for better border security.

The White House and Democratic lawmakers have been accusing one another of pettiness since Pelosi raised doubts about the speech. Trump followed up by revoking her use of a military plane for a congressional delegation visit to Afghanistan.

North Carolina’s House speaker, Tim Moore, invited Trump to deliver the speech in the North Carolina House chamber. Michigan House Speaker Lee Chatfield has offered his state capitol. Trump spoke with both of them this week, according to Moore’s office and a tweet from Chatfield.