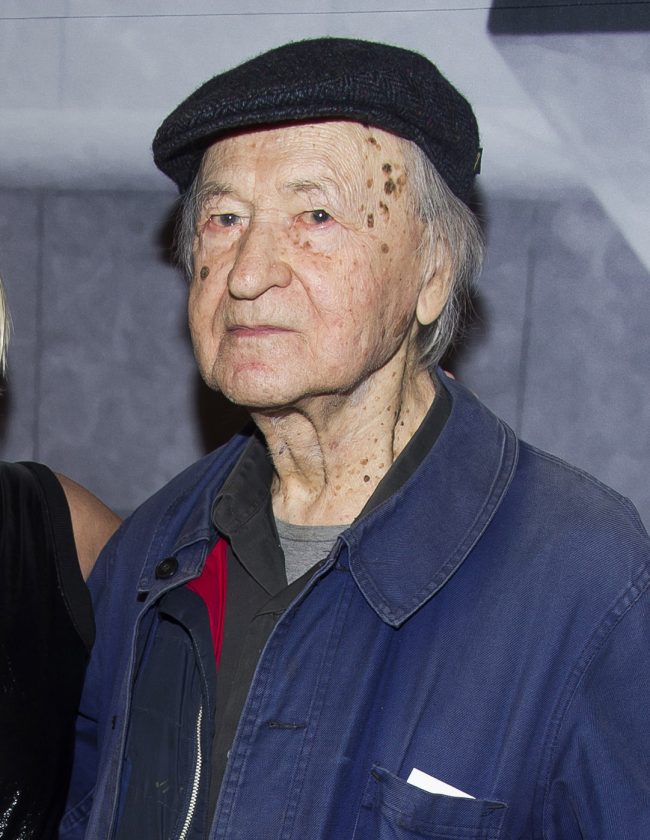 FILE - In this Nov. 19, 2014 file photo, Lithuanian-born director Jonas Mekas attend the Whitney Museum Gala in New York. Mekas, 96, who survived a Nazi labor camp and years as a refugee, died Wednesday, Jan. 23, 2019, at his home, according to the Anthology of Film Archives. He was artistic director of the New York center for film preservation, a leading avant-garde movie theater. (Photo by Charles Sykes/Invision/AP, File)

NEW YORK — Jonas Mekas the Lithuanian-born director, critic, patron and poet widely regarded as the godfather of modern American avant-garde film and as an indispensable documenter of his adopted New York City, has died. He was 96.

Mekas, who survived a Nazi labor camp and years as a refugee, died Wednesday morning at his home, said the Anthology Film Archives. Mekas was artistic director of the New York-based nonprofit theater, a leading avant-garde cinema and center for film preservation.

Weighted by the scars of wartime Europe, energized by postwar America, he was at the center of an historic era for the avant-garde and befriended such celebrities as Jacqueline Kennedy, John Lennon and Andy Warhol. He published poetry and memoirs, made hundreds of films and videos, wrote an influential column for the Village Voice and opened the Anthology Film Archives, where a young Martin Scorsese was a frequent attendee.

“There isn’t one word, or even a dozen, to characterize the breadth of Jonas Mekas’s achievement,” the critic J. Hoberman wrote in 2012.

Scorsese, John Waters and James Franco were among his admirers, and, although he never approached mainstream popularity, his friends and collaborators included some of the most important artists of his time and some of the most famous people in the world.

On Wednesday, filmmaker Jim Jarmusch called Mekas “one of the most inspiring artists I have ever encountered — the poets’ version of the Kung Fu master.”

Using film as a diary, never far from a 16mm Bolex camera, Mekas defied the rules of commercial movies while reaching back to the earliest days of moving images, when filmmakers simply recorded scenes of everyday life.

Kennedy allowed Mekas to film her and her family, a rare gesture by the private former first lady and the basis of the Mekas documentary “This Side of Paradise.” He was an early supporter of Warhol and helped film Warhol’s underground classic, “Empire,” an 8-hour silent portrait of the Empire State Building. He shot some of the earliest known footage of rock’s prototypical punk/avant-garde band, the Velvet Underground.

He was close to Allen Ginsberg and other Beat poets and his first full-length release, “Guns of the Trees,” was a 1961 documentary that featured Ginsberg’s narration. He knew Yoko Ono years before she met Lennon and later became friends with both, filming a Lennon birthday where guests included Ringo Starr and Miles Davis and helping Lennon and Ono settle into New York after they moved from London in the early 1970s.

“It was late at night and I was in bed, when I got a call from Yoko, who had just landed with John at JFK (airport),” Mekas told the Guardian in 2012. “She said, ‘Jonas, John wants an espresso. Do you know a good place that is still open in New York?’ It was a little crazy, but that was how it was back then.”

He was among the most vital filmmakers never to receive an Academy Award, although his adaptation of a play about life in a military prison, “The Brig,” did win the Grand Prize at the Venice Film Festival in 1963. Other notable works included “Walden,” a 3-hour documentary about the New York art scene of the 1960s that features shots of Lennon and Ono, Norman Mailer and Timothy Leary; “Reminiscences of a Journey to Lithuania”; and “Lost, Lost, Lost,” reflections on his early years in New York with footage of Ginsberg, poet Frank O’Hara and Amiri Baraka.

Many of his projects were collaborations with his brother and fellow refugee, Adolfas Mekas, who died in 2011. Some works were as intimate and dreamlike as a home movie, with abrupt cuts and disjointed sound. The technique often reinforced the story; the harsh lighting and blurred images of his Velvet Underground film seemed to capture the jarring, foggy ambiance of the music itself.

Mekas was also revered among fellow poets, especially for the cycles “Idylls of Semeniskiai,” about his early years in rural Lithuania, and “Reminiscences,” verse about his years after World War II.

It was a miracle that he lived past childhood. Mekas, born in a farming community in 1922, was repeatedly displaced and persecuted. The Soviet Union annexed Lithuania in 1939, only to have the Nazis seize the country two years and send Mekas and brother Adolfas, to labor camp. The brothers escaped, and lived as refugees in the years immediately following World War II, a time captured in his “Reminiscences” cycle.

After briefly thinking of emigrating to Israel, the Mekas brothers arrived in New York in October 1949.

“Yesterday, at about 10pm, the General Howze pulled into the Hudson River. We stood on the deck and we stared. 1,352 Displaced Persons stared at America,” Jonas, who settled in the Williamsburg section of Brooklyn, wrote in his diary at the time. “All the wartime, post-war DP miseries, desperations and hopelessness, and then suddenly you are faced with a dream. You have to see New York at night, from the Hudson, like this, to see its incredible beauty.”

Already fascinated by movies, he initially thought he could adapt avant-garde sensibilities to commercial films. But he decided within a few years that the mainstream was hopeless. In the early 1960s, he helped establish the New American Cinema Group, through which Mekas, Peter Bogdanovich, photographer-filmmaker Robert Frank and others called for an independent system of making and distributing movies.

“The official cinema all over the world is running out of breath. It is morally corrupt, esthetically obsolete, thematically superficial, temperamentally boring,” the group announced in its founding manifesto.

Over the following decades, Mekas championed the avant-garde in every way possible — as a director, fundraiser, critic, publisher, programmer, distributor and agitator, even spending a night in jail in 1964 for exhibiting Jack Smith’s explicit “Flaming Creatures.” He was the Village Voice’s original film reviewer, a job later held by Hoberman and Andrew Sarris among others, and his Film Culture magazine (which ended in the 1990s) included contributions from Sarris, Bogdanovich and Manny Farber.

He grew more prolific with age. When he turned 85, he posted a new short film online for every day of the year. In his 90s, he was still regularly adding videos to his web site, www.jonasmekas.com , whether shots of rain falling in Brooklyn or a mealtime conversation with fellow documentary maker Agnes Varda. He was also writing about his early years in New York City. “We are bound together by life,” he said of himself and the city in 2013.

In an interview with The New York Times published in January, Mekas calmly ruminated about death.

“It’s a very normal transition,” he said. “What’s beyond that line, it’s where the mystery begins, where it becomes interesting. There are glimpses in the messages that come from there, some of the old Scriptures. Indications are there, and I believe it all. I believe it much more than anything that’s written since the 12th century.”

The AP’s Jake Coyle contributed to this.