A number of Marshalltown businesses can claim a rebound from the July 19, 2018, tornado.

But only the local Thompson True-Value can boast rebuilding from a truss-breaking snowstorm and the tornado both in 2018.

The new store is across the street from their old store, since razed.

The old building was a Marshalltown business fixture since the 1950s when initially constructed as Smitty’s Grocery store. It was later converted to a hardware store which the Thompsons purchased in 1985. 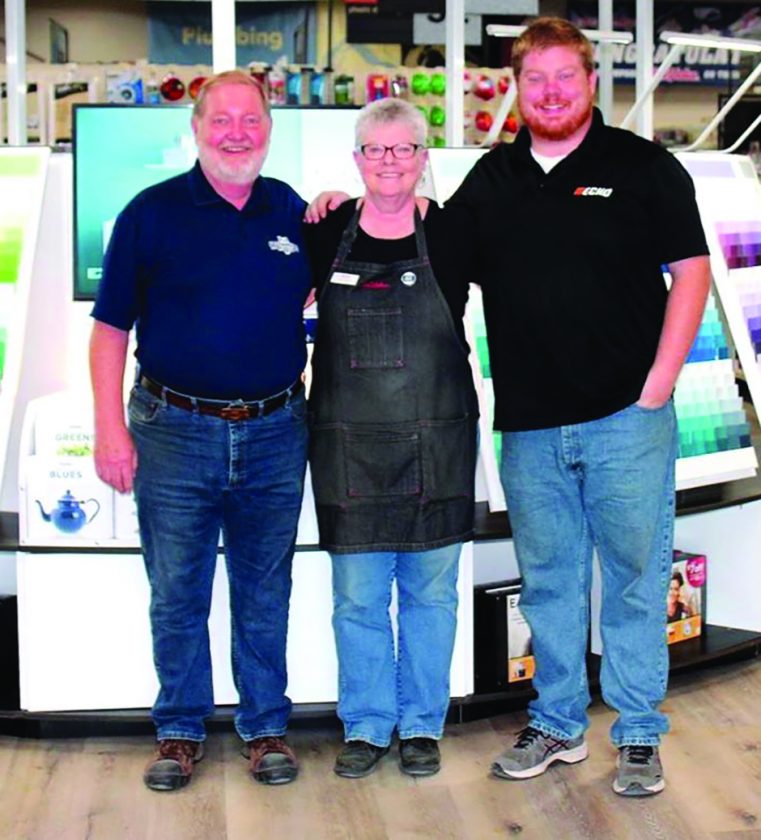 Dave Thompson said a bit of the old hardware store is in the new. To enter the new store, one must walk over several old red bricks.

He was thrilled to show them off.

“Those are bricks we saved from the old store,” he said. “A customer who is walking across our yard of bricks … from the history of the old store right smack dab into here, the new.”

A polished concrete floor, bright LED lights, and a giant, colorful True-Value paint display greet customers as they walk in.

His excitement showing off the new store was contagious.

“We have tripled inventory,” he said. “And massively expanded our footprint into what we can do at retail. Our old sales floor was about 9,600 square foot, this (new) is 14,000 square foot. We went with seven-foot high fixtures and that in and of itself gave us 38 percent more floor space.”

Thompson said the goal in planning the new store was to have a one-stop store on the north side of town that can service all of one’s needs without having to go to the south side.

The 47-year veteran of the hardware business who got his start in 1972 at his family’s True-Value store in Eau Claire, Wisc. gushed about the new store’s energy efficiency.

“We are R-39 in the ceiling and R-29 in the sidewalls,” he said. “The first utility bill we got in the first month while running 100 percent air conditioning while we were setting up (the new store) was lower than the lowest utility bill ever we had at the old store.”

There is more parking at the store’s front, and customers can drive in from Center Street or Linn Street.

“It took us 15 months to move across the street,” Thompson said with smile.

The significant investment and total rebuild was brought about when a heavy, wet snowfall fell in late April of 2018 followed by extremely high winds.

Dave and son Paul Thompson heard what sounded like a gunshot in the store one day.

“We thought a car had lost control while on Center Street and crashed into the store,”

Dave Thompson said. “Paul and I went outside. There was no car but our sign was down.”

On June 1, Hay Construction finished the installation of one set of steel beams on each side of the store’s front entrance, backed by tons of concrete block. The steel and concrete continue to support the north wall.

The store remained opened for business.

However, customers had to stand outside the store’s north entrance and order their goods, while True-Value staff went in and retrieved the items.

The fortifications and north wall withstood the tornado, but the storm’s winds did other structural damage to the fragile building. “After we discovered the roof trusses had fractured, we sat down with Paul, and asked: ‘What do you want to do? He did not hesitate … he said he wanted to stay here. And that is when Kathy and I made the decision to rebuild.”

Negotiations with Wells Fargo were renewed and their offer was accepted July 20.

“All of the construction, electrical, and plumbing, except fire sprinklers was installed by local contractors,” he said. “We live here and buy here.

“We have truly loyal customers. They stuck with us when we were handicapped across the street, came to the Marshalltown Mall when we were there for a year while the new store was being built, and are back with us again. We are truly grateful.”