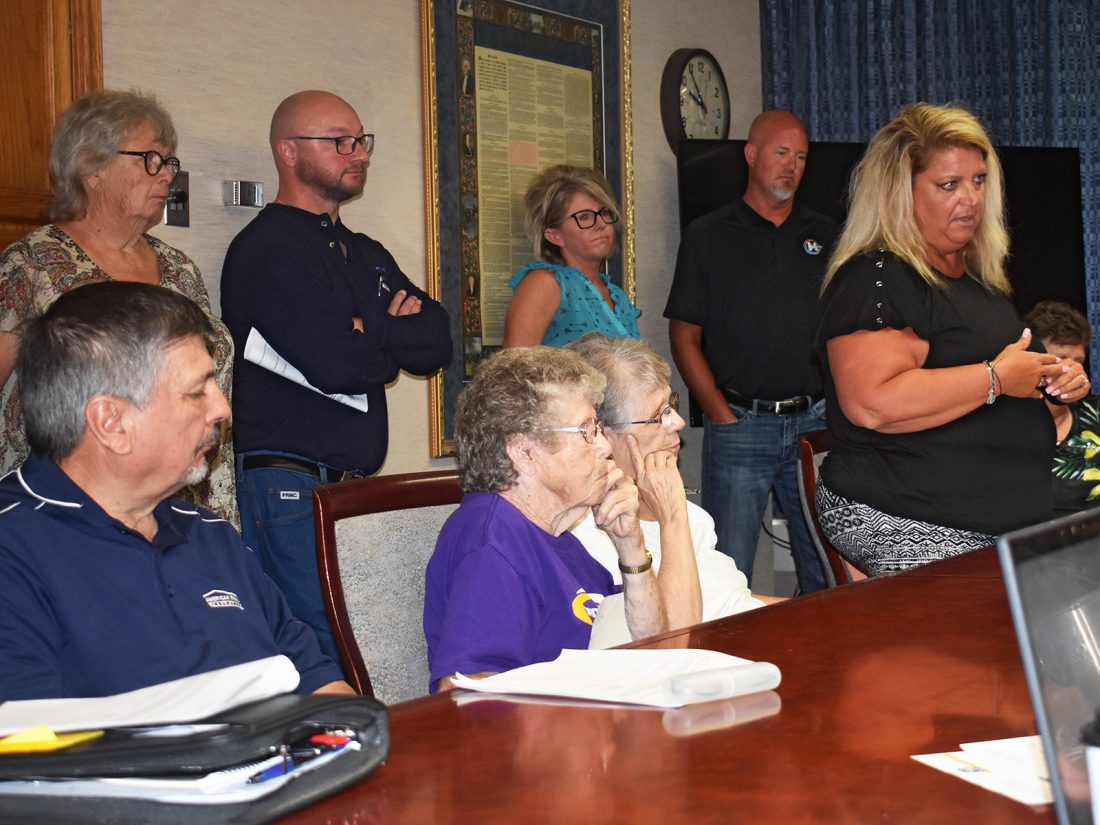 T-R PHOTO BY SARA JORDAN-HEINTZ Nearly 40 people were in attendance at the meeting, many present to speak at and listen in on the public forum portion. Concerns about the North Center Street bridge replacement project detour were again voiced, including by Michelle Gauthier, far right.

Change of status and rate of pay for Deann Tomlinson, treasurer’s office, brought about discussion and amendment of the proposed change. Her job with the county has changed from assistant supervisor to property tax supervisor, full time, with her pay at the prior job being $20.19 per hour. It was proposed to increase her pay to $26.78 per hour, effective Tuesday. Marshall County Auditor/Recorder Nan Benson voiced concerns.

“This is a very big jump and a dangerous precedent for us to set at the county,” Benson said. “In the human resource realm this would happen in more of a phased in approach.”

Benson did note that the previous property tax supervisor, now retired, was making $27.13 per hour, but had more years of experience.

Marshall County Treasurer Jarret Heil said this pay raise does stay within his budget approved by the supervisors.

“Tomlinson has been with the county over five years and I don’t think a probationary period is necessary. She’s being hired into a new position and that’s the rate of that position,” Heil said. “As a philosophy, we’ve always paid according to what the position is and not necessarily the person, with a lot of these positions at the county.”

“I may ask for some big raises for my employees,” County Buildings and Grounds Director Lucas Baedke said of the Tomlinson pay increase.

Board Vice President Dave Thompson responded to Baedke’s concerns by saying, “Buildings and grounds was grossly mismanaged before you took over.”

The supervisors unanimously voted to amend the proposal, putting Tomlinson’s new pay rate at $23.50 per hour, to be raised to the $26.78 per hour rate in 90 days time.

Nearly 40 people were in attendance at the meeting, many present to speak at and listen in on the public forum portion.

Michelle Gauthier, of 186th Street off of Sand Road, brought a petition before the supervisors signed by more than 70 people asking for a safe route in and out of their neighborhood — that would not require them to encounter the current construction equipment and water works trucks traffic. The detour takes people on Reed Avenue going north, and then on 182nd Street going east to meet up with Iowa Highway 14, giving them a route into Marshalltown as the bridges are being replaced, which is about a two-mile stretch of gravel roads.

Gauthier said the road is not wide enough for all of this heavy equipment and the blind hills make it difficult to see oncoming traffic. She and fellow supporters also expressed concerns about flooding and winter driving conditions. Accidents have occurred, she said, with the worry there may be fatalities in the projected three-year time span of this detour.

“We need a hard surface — something that’s plowable — this is three winters, if that’s the case. If we have a winter like we had last winter, that’s 12 inches of snow, twice in one week,” Gauthier said. “Those roads were not passable. The only way we could get into town is over the Center Street bridges, which you are closing now.”

Gauthier said she has been in touch with a Dubuque County supervisor about how to go about having a hard surface put down on the gravel detour. The supervisors did not feel that someone not familiar with the road, who works in a different county, should be offering advice.

“They have no idea what they’re doing here, and you (Gauthier) don’t understand the road system either,” Patten said.

Ellen McKay told those in attendance that her 97-year-old mother resides on Sand Road. In the case of flooding, she would have to drive through Bangor to reach her mother, going far out of her way to do so.

About 30 minutes was dedicated to the public forum which is a venue in which the public may make comments on topics of county business other than those listed on the agenda. No action is taken on these topics.

Oktemberfest will return to the downtown

In other action, the supervisors voted unanimously to approve Oktemberfest, Inc.’s usage of the sidewalk on the north side of the courthouse, north side of the fence and the mobile band shell for Oktemberfest festivities, slated from September 26 to 29. Due to construction efforts, however, Baedke said the band shell would have to be powered with the use of a generator.

In addition, the Marshall-Hardin County Public Environmental Health/Planning and Zoning Administrator Agreement was tabled for the next meeting, as suggested by Thompson.

“Hardin County finally got back to us this morning, and we got them the same agreement. Their attorney had a couple of minor changes, but we weren’t able to get them done on both ends of this agreement on time (for the meeting,)” Thompson said.

The next Marshall County Board of Supervisors meeting is set for 9:05 a.m. Aug. 20 on the second floor of the Great Western Bank Building, 11 N. First Ave.