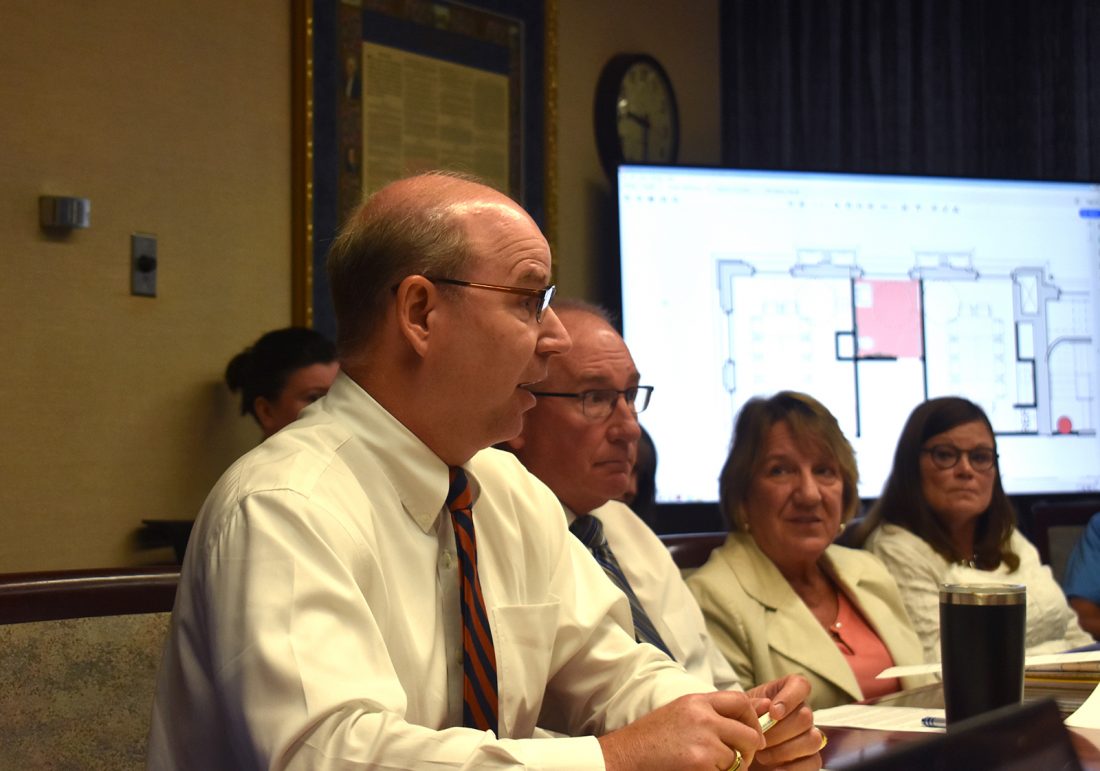 Members of the judicial system and county officials continue to disagree about space in the Marshall County Courthouse.

The Marshall County Board of Supervisors voted after lengthy discussion to table an item about bathroom space for trial jurors Tuesday. While the courthouse houses both city and state judicial offices, the supervisors have the final word on the new courthouse layout, per Iowa Code.

“We need to remodel whatever restrooms do go back in there,” said county buildings and grounds director Lucas Baedke.

As of Tuesday’s meeting, the layout called for one bathroom adjacent to two jury deliberation rooms. Most of the time, only one jury is in session, but there are times when two are in session. Jurors given break times during trials to use the restroom must do so one at a time.

The issue of the juror bathrooms came up at previous board meetings. At one point, design firm OPN Architects had looked at a two-bathroom option. Judicial system officials said two bathrooms are necessary.

“Say I have 14 jurors, they sat there all morning, we all drink coffee, we all have bodily functions, and you’re expecting me to make them go one at a time … and you’ve got 14 people that need to go to the bathroom,” said judicial assistant Margie Mathis. “I cannot take them out in the rotunda because once we have a jury, we have to keep them separated from the public.”

The problem would be worse if there were two jury trials going on, she said.

Board Chairman Steve Salasek said one idea for the one jury bathroom was to have some jurors use a bathroom in a secure area on a different floor. Mathis said that is not a viable option.

“I’m responsible for those jurors. I can’t let them go different ways,” she said.

Baedke said the reason the county has so far decided against a second jury bathroom is cost. He said the estimate to build a unisex, ADA-compliant bathroom would cost around $65,000, including architect fees.

District Court Administrator Scott Hand attended the meeting and supported the local court officials’ request for two jury bathrooms. He said even if it was feasible for some jurors to use a secured bathroom on a different floor, a risk for mistrial would still exist.

Board Vice Chairman Dave Thompson said the decision for a single restroom by the jury rooms had to do with cost and with security. The courthouse is set to have a single, secure public entryway and county officials decided a planned elevator near that entryway should be moved to improve the entrance.

“We thought that was a better function for the funds available because it would assist everybody in the building and enhance security,” he said. “If it comes down to the point that I’m going to worry about a decision that I have made and it being on my shoulders, it’s going to fall on courthouse security, not whether a fact that somebody had to wait a few extra minutes for a trial or to go to the bathroom.”

In the board’s action to table the bathroom discussion until Sept. 4, Baedke said he would look into adding a second bathroom and get a better idea of costs. The county officials said they would also look into other project savings to see if there is funding available for such a project.

Members of the judicial system, including District Court Judge John Haney, repeated concerns that county officials had not taken their needs into enough consideration when it came to the courthouse layout.

Specifically, Haney, Hand and others said the planned four courtrooms and a multipurpose room that could act as an extra courtroom are not enough to meet the needs of the justice system.

In response, county officials said they are working within a budget and with a finite amount of space.

The opening of the courthouse for the first time since it was damaged by the 2018 tornado is planned for spring.