‘Farm the best, conserve the rest’ 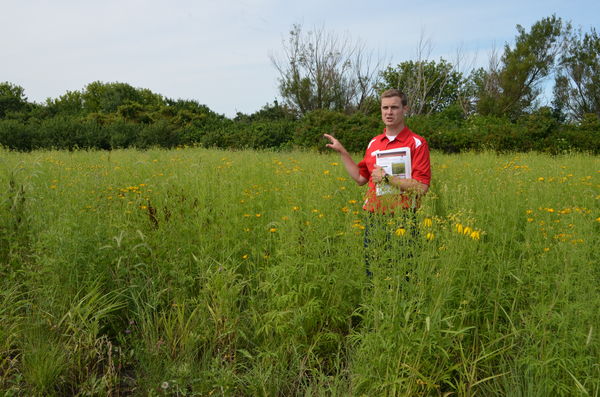 Farm News photo by Kriss Nelson
Adam Janke, Iowa State University Extension and Outreach wildlife specialist is shown speaking at a field day this summer. Janke said there are several areas on the farm and out in the fields that could be better utilized as wildlife habitats.

As the mowing season drags on and you feel like you have too much yard to mow or you look at those less than ideal areas in your field, have you ever considered turning those into wildlife conservation areas?

Adam Janke, Iowa State University Extension and Outreach wildlife specialist is shown speaking at a field day this summer. Janke said there are several areas on the farm and out in the fields that could be better utilized as wildlife habitats.

Why should we care about wildlife on the farm?

“The answer is not as easy as addressing the question on why we care about profit margins or why do we care about nutrient stewardship or things like that, that are much more tangible in the agricultural landscapes,” said Janke.

Oftentimes, landowners may not realize there is an opportunity for wildlife habitat right in their backyard.

“There are lots of them (opportunities) and I think people that work in the agricultural system can always be thinking of those opportunity areas whether it is for hunting, fishing, bird watching or pollinators,” he said.

Janke said there are things going on in our working landscapes that we take for granted.

“There are all sorts of small mammals out there eating weeds – consuming weeds in a way that make them less abundant in the future,” he said. “That may seem abstract, but if we took some of those natural functions away, we would really find they were pretty valuable and played an important role in our natural environment.”

Take bats, for example. Janke said they play an important role in agriculture in our state.

“There have been studies on things like bats,” he said. “Bats, of course, are insect feeders and in Iowa, we have nine different species of bats that feed exclusively on insects in Iowa. And they like beetles. And there are a couple of different species of beetles we don’t like, like the corn rootworm – the larvae phase is what producers are concerned about, but you don’t get larvae without the beetles. Studies have shown, across the Cornbelt, bats account for a billion dollars annually of free pest control.”

Make an impact before you have to

Janke said there are incidences where we are obliged, by law, to care about wildlife in Iowa.

“We are burdened by a lot of federal regulations related to agricultural production and wildlife,” he said. “There are all sorts of reasons to care about wildlife. It may start with because you like to hunt and can go all the way up to because it is required. Or the one I like to fall back on is, it is just the right thing to do.”

Whether you are managing wildlife for damage challenges – such as a groundhog in the garden, or for good things, like fostering bats or having milkweeds for monarch butterflies, Janke said those things help us to understand where wildlife lives and that is what is considered a wildlife habitat.

But there needs to be some consideration for how these elements are arranged.

The arrangement of elements is different for each species.

“For example, whitetail deer are content to move a mile or so to find a water source, whereas a species that relates exclusively to water, like a muskrat, is never going to venture more than a few feet away,” he said.

Another consideration for the arrangement of elements is space.

“When we talk about wildlife habitat, some species need a lot of space and some species can get by on anything,” he said. “I like to use the monarch for example. Common milkweed – they seem to take advantage of about any milkweed in many places. You can find common milkweed growing in sidewalk cracks in the middle of the city. It’s not hard to grow if we can leave it alone with the mower or herbicides on the side of the road and edges of the field.”

In contrast to that, Janke said there is the greater prairie chicken that was once found all throughout Iowa.

“They played an important role in the diets of the early European settlers in Iowa,” he said. “It was such an abundant bird. They lived in the tall grass prairie. That is the habitat the greater prairie chicken needs. In absence of about 10,000 acres of continuous grass, either pasture, hayfields or prairie – the prairie chickens are not going to survive. That is why we have very few prairie chickens left in Iowa.”

“What I tend to spend most of my time talking about with agricultural producers, particularly row crop producers, is where are the small patches on the farm where we can find for wildlife habitat? We are not going to have prairie chickens in our row crop production areas, which are fine, but we will have monarchs, song sparrows, pheasants, quails and other things existing on the margins of our crop fields if we can find these opportunity areas for wildlife habitat,” he said.

Janke said areas he likes to emphasize to producers are the unprofitable areas.

“These are all different shapes and sizes. You know where they are because you drive in the cab of the combine and you see where the crops aren’t growing year after year. There are lots of opportunity areas like wet areas in these glaciated landscapes that consistently don’t grow a crop that provide an opportunity for a wildlife habitat,” he said. “Other places are areas where you are spending a lot of time on the mower, but no other time there. Maybe if you have a big yard. If you are mowing that, do something else like creating a wildlife habitat out of those opportunity areas out on the farm.”

According to information provided by Janke, once you have identified these opportunity areas on your farm, work to promote diverse, natural vegetation like grasses, flowers and shrubs to provide habitat for wildlife.

If your opportunity areas are on working parts of your farm, like in hay fields or pastures, use the resources provided by ISU Extension and elsewhere to gain tips and tricks to maximize the utility of those working lands for wildlife while still meeting your production goals.

Janke said most times, wildlife habitat projects can be done alongside water or soil conservation practices like buffers, prairie strips, wetland restorations and other projects. A “win-win for the land, people and wildlife,” he said.