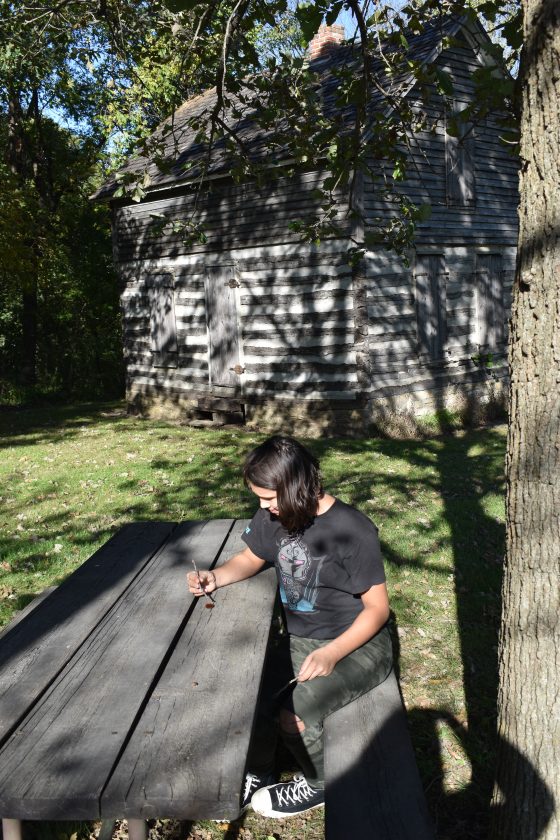 T-R PHOTOS BY LANA BRADSTREAM Kiera Bradstream takes a break and rests on a bench close to . . . but too close . . the Mormon Ridge Log Cabin. Some of the locations surrounding the cabin made Bradstream feel uneasy.

An old log cabin sitting among some trees was the setting of mine and Kiera’s second paranormal-hunting adventure — if you can call it actual hunting.

The Mormon Ridge Log Cabin sits six miles northwest of Albion, off of a gravel road and with a plenty of black walnuts falling to the ground around it. It was the first time Kiera and I had encountered black walnuts and were curious. Kiera managed to grab one of the pieces of produce from a tree, crack it open and taste what was inside. She is not a fan.

To be fair, Kiera tasted the husk and never made it to the brown nut inside. We were going to take some home with us but Kiera then discovered a maggot eating its way through a husk and quickly decided against it. Luckily Mike Stegmann, the director of the Marshall County Conservation Board, was there to assure us the walnuts were edible and delectable. After the fruits fall to the ground, the maggots eat through the husks but leave the actual nuts alone.

Mike also let us in to the cabin, which we were told was haunted. We heard that restless spirits could be felt and that if you were in the cabin and you knocked, there would be knocking back.

“You mean like when we were supposed to hear dogs after saying ‘Anna Wiese’ three times,” Kiera asked, the skepticism just oozing out of her. 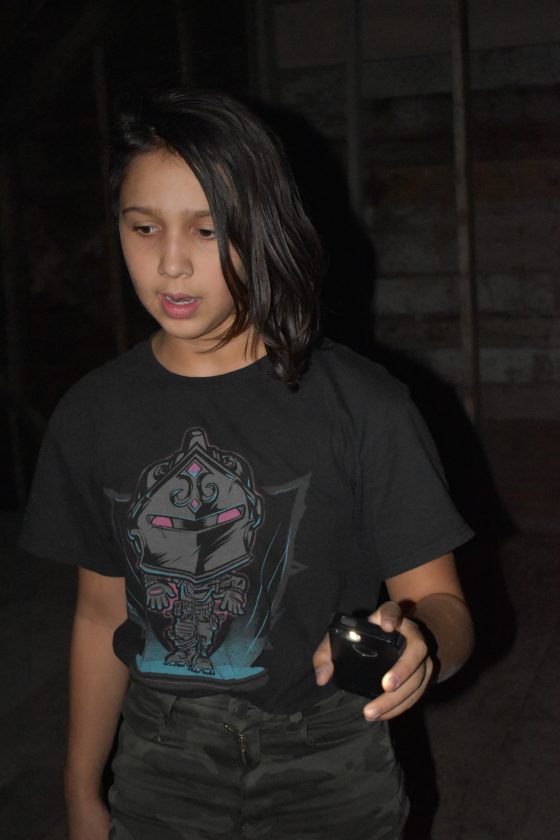 T-R PHOTO BY LANA BRADSTREAM Kiera Bradstream explores the Mormon Ridge Log Cabin on Tuesday afternoon. She knocked on various surfaces in the structure, hoping to hear the rumored proof of ghost activity.

“I’m going to knock and if I hear any knocking back, I’m going to look for you Mom,” Kiera continued.

Was she a little scared? I asked her why.

“Because then I will know if the knocking is you.”

Take notes — this is what happens when you prank your children too often.

Regardless, this location intrigued Kiera because of the “cabin in the woods” aspect. The history of the site made it less appealing because she wanted a lesser-known location. That history is grim, however.

Mormon Ridge was the settlement location in the 1840s of 1,000 Mormons who were traveling to Utah. Not used to the Iowa winters, they dug caves in the hillsides as resting places for the sick and elderly. Many of them — men, women and children — died from exposure.

So, the area has the historical setting for supernatural happenings.

When Mike – who does not know anyone who has seen or heard anything weird at the location – let us inside the cabin, it was creepy — mainly because of the spiders. As an arachnophobe, I am not a fan. There being no lights in the cabin and the windows closed made me paranoid I was going to walk into an evil spider web. Kiera braved her way forward, however and even proceeded up the stairs of the cabin, knocking on every surface she could think of just to see if any knocking would be heard back.

We did not hear any knocking . . . and Kiera made sure to keep an eye on me while I chatted with Mike and got information about the cabin.

I knocked and took photos — just in case my camera captured something our eyes could not. We paid attention to the atmosphere and the air in the cabin. We did not feel weird or uncomfortable. A couple places were a little chilly, but it is October in Iowa.

Outside of the cabin was a different story.

As Kiera looked through the black walnuts on the ground, right beside the cabin, she stopped and asked Mike, “Did someone come with you?”

He replied that no one did.

“I just heard someone walking here.”

Mike and I were standing on the porch, so any rustling of leaves or dry grass would not have been done by us. Kiera considered that maybe it was the wind but quickly dismissed that because of the rhythm between the noises. She said they were perfectly spaced and that it sounded like someone walking.

Not long after that, Kiera retreated to another black walnut tree. It was nearby but far enough away from the cabin. She was not liking how she felt at that location by the cabin. I walked through that location before we went into the cabin and it felt like the air was noticeably cooler — just in that one spot.

Maybe it was the wind . . . or maybe there is something to the rumored haunting.

T-R PHOTO BY LANA BRADSTREAM Kiera Bradstream explores the Mormon Ridge Log Cabin on Tuesday afternoon. She knocked on various surfaces in the structure, hoping to hear the rumored proof of ghost activity.

T-R PHOTOS BY LANA BRADSTREAM Kiera Bradstream takes a break and rests on a bench close to . . . but too close . . the Mormon Ridge Log Cabin. Some of the locations surrounding the cabin made Bradstream feel uneasy.