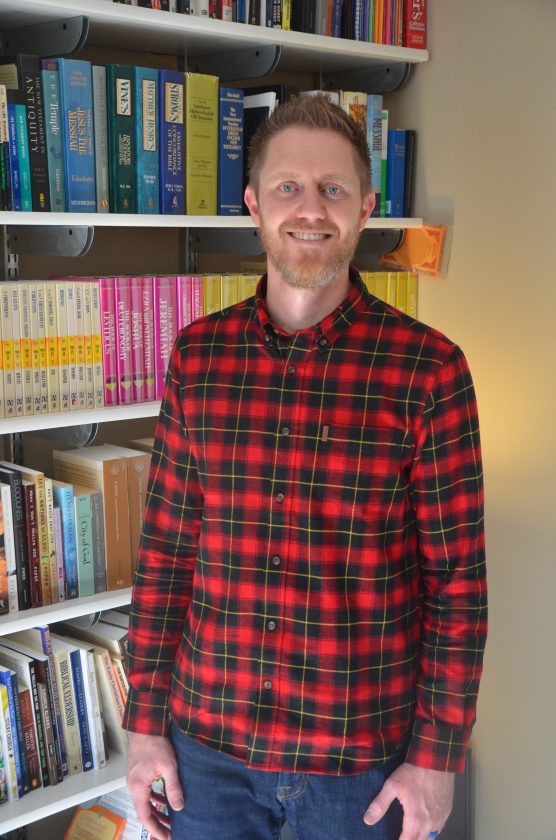 T-R PHOTO BY CHUCK FRIEND Steve Bensema is a new resident of Marshalltown who is starting a new church in 2020.

Moving has been quite common in Steve Bensema’s life to this point, but faith and family have played a large part in what has happened and what lies ahead for the new-to-Marshalltown man.

Bensema grew up in the suburbs of Chicago and then attended the University of Iowa from 2003-2006 where he met his wife. After a year in Chicago and two in Minneapolis, the Bensemas moved to Ames for the next eight years.

“At that time I was self-employed, selling real estate and operating a shaved ice business. We became members of Cornerstone Church and my wife and I were involved in several connectional groups. I soon became involved in vocational ministry and we were sent to Dubuque for 2 years where I became a teaching pastor,” Bensema said.

“Our kids are M, N, O, P,” Bensema laughed. “We liked the name Olivia, but when we found out we were having twins we had to find a ‘P’ name and came up with Payton. It was a joke at first, but it just stuck.”

Starting a church is a new venture for Bensema.

“We are very excited about what is going on here – there is a lot of moving pieces that go into the process of opening a new church in any community,” he said.

Bensema will be heading up the new church when it opens in Marshalltown. He said that right now he is spending a lot of time laying the foundation and supporting structure.

“People is what I am focusing on now – I have a group of men and women that are working with me to form what will be the leadership to build on when things are ready to open in 2020,” he said. “There are many things that we will need to do before next fall, but people are what comes first.”

According to Bensema, so many people are excited to help open the church that some of the locations that were being considered are already too small to consider anymore.

Cornerstone has always been about the younger – or next – generation of Christians; helping them to go from death to life by finding Jesus. So Bensema said there is a big and exciting response of the people wanting to come alongside of what God has already done in the Marshalltown community – to see other people’s lives changed in an awesome way.

“We want the church to be a healthy church from the beginning – not just one where there was an awesome sermon on the opening day it launched,” Bensema concluded.