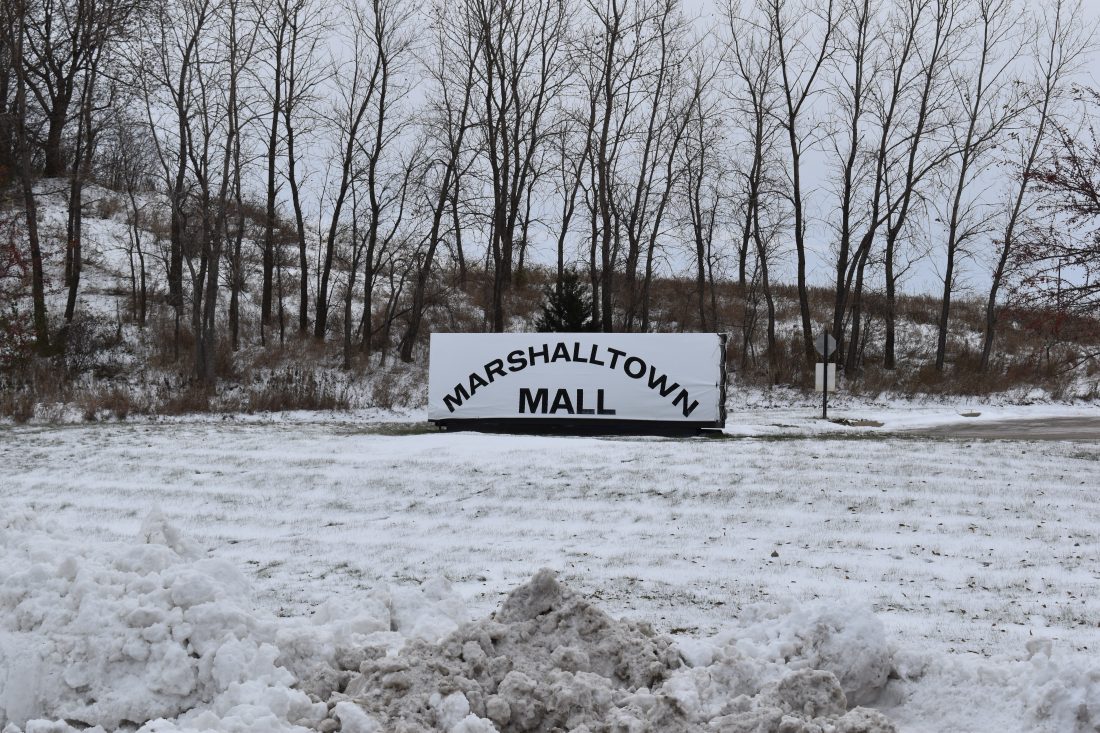 T-R PHOTO BY LANA BRADSTREAM A lone mall sign sits in the back of the Marshalltown Mall, notifying people not driving on the arterial Center Street of the mall’s existence.

Store owners at the Marshalltown Mall were not notified of the upcoming auction of the property.

Karen Snyder, owner of the Chop Shop, a mall salon, has been a resident there for more than three years and she learned of the Nov. 19 auction on social media.

“I was stunned and a little angry the owners did not even tell us,” she said.

The lease on the Chop Shop is up in May and Snyder said she is going to wait and see who buys the property – if anyone does. The Nov. 19 auction, run by Ten-X Commercial in California, has a starting bid of $900,000 and a reserve price attached, but the anonymous owners – an investment firm in New York City – will not reveal what that price is. If the final auction bid does not meet the reserve price, the mall will not change hands.

Snyder is hoping that the possible new owners will reveal intentions so she can look for another location in Marshalltown. However she said she has had a good amount of business in the years the Chop Shop has been in the mall and, contrary to what people are saying, the rent is not high. 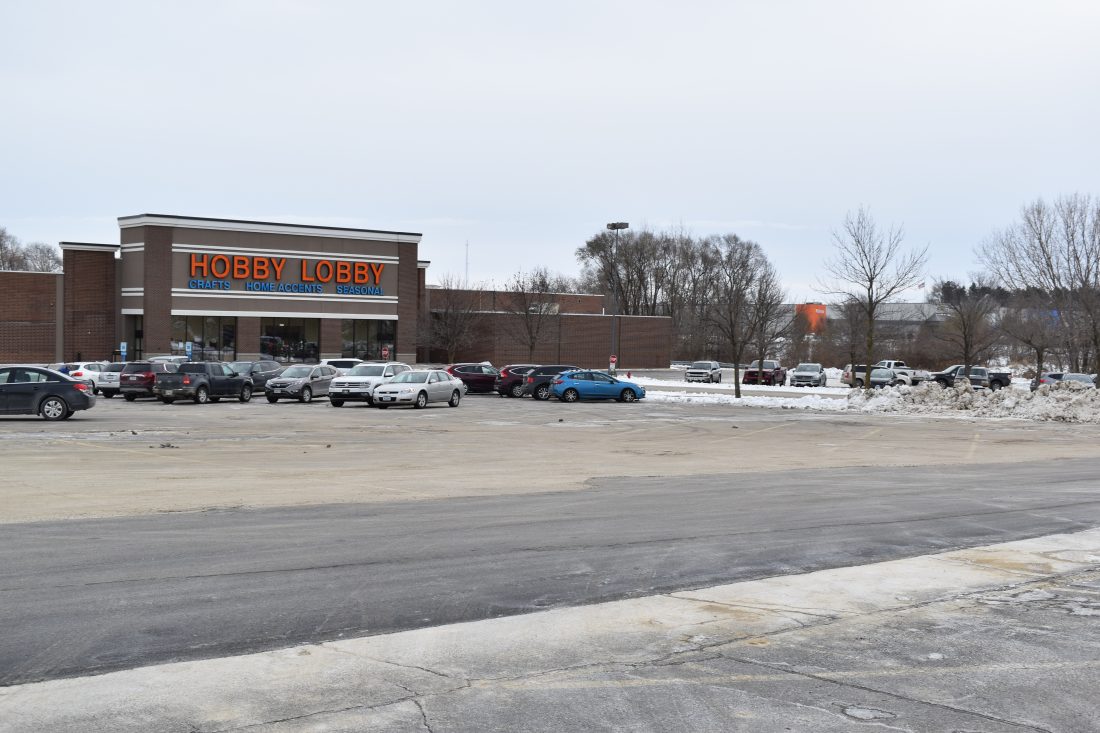 T-R PHOTOS BY LANA BRADSTREAM Hobby Lobby, one of the Marshalltown Mall tenants, is shown here Wednesday along with ample parking. The mall is scheduled on Nov. 19 to be auctioned online.

“The rent has been really reasonable,” Snyder said. “It is very affordable but that might change when someone buys it.”

The salon owner has seen a number of stores move out and said the claim that the mall is 75 percent occupied is not accurate. There are around 20 empty spaces and 20 occupied in the mall.

Not all of the occupants are permanent or even long-term. One is McGregors, a downtown business misplaced by the July 2018 tornado that is planning a return to Main Street. Another is the Nut House, which is only open Monday, Wednesday and Friday.

Some previous tenants were Younkers, which closed in 2018 and Menards which moved to its current Marshalltown location in 2012. The mall was also home to Sears, Woolworths and Walmart.

“Honestly I think the store owners moved out because the mall owners have not cared about the mall in a long time,” Snyder said.

Some examples she provided of actions by the owners is shutting off the two fountains in the primary walkways. The water has not flowed there in three years, Snyder said. There are maintenance issues which need to be addressed that have not been, such as leaky roofs and pot holes in the parking lot. In the winter, she said they are good about keeping the parking lot plowed but do not spread salt, which have led to complaints.

“A lot of elderly people are scared to come here because of the ice,” Snyder said.

The mall office seldom has anyone in there and store owners now have to mail their rent to the management firm – Lerner Company – in Nebraska. Before, she said they could drop it off at the office.

Snyder is hoping someone will purchase the mall with the intention of reviving the property.

Mayor Joel Greer said he was excited when he thought about the possibility of a new owner.

“I hope we get a good buyer with a connection to Marshalltown, someone who wants to keep the town going,” he said. “I hate to say anything negative against the current owners but they have been distant and do not have much of a stake in things. My first reaction was, ‘Good. What an opportunity for us.'”

City administrator Jessica Kinser said the city is trying to be as forward thinking as possible. The Marshalltown Mall is in a place that could qualify for tax increment financing thanks to the updated urban renewal plan.

Kinser learned about the auction on Wednesday afternoon and said the mall is one of the largest property tax payers in the city.

“It is a valuable piece of property and we would like to see more value produced with it, not less,” she said.

Kinser does not have a preference on the types of businesses she would like to see move in to the mall if new owners take over.

“We have a lot of needs for commercial business in Marshalltown,” she said.

Greer is hoping for an “angel investor” to protect the town and bring in business or to convert the mall into housing units.

“We need more housing,” Greer said. “If I had a magic wand, a developer would turn it into housing that are nice places to live with a meeting room for conventions.”

T-R PHOTOS BY LANA BRADSTREAM Hobby Lobby, one of the Marshalltown Mall tenants, is shown here Wednesday along with ample parking. The mall is scheduled on Nov. 19 to be auctioned online.

T-R PHOTO BY LANA BRADSTREAM A lone mall sign sits in the back of the Marshalltown Mall, notifying people not driving on the arterial Center Street of the mall’s existence.

A civil emergency has been declared in Marshalltown and the city is asking residents to take note of some things as ... 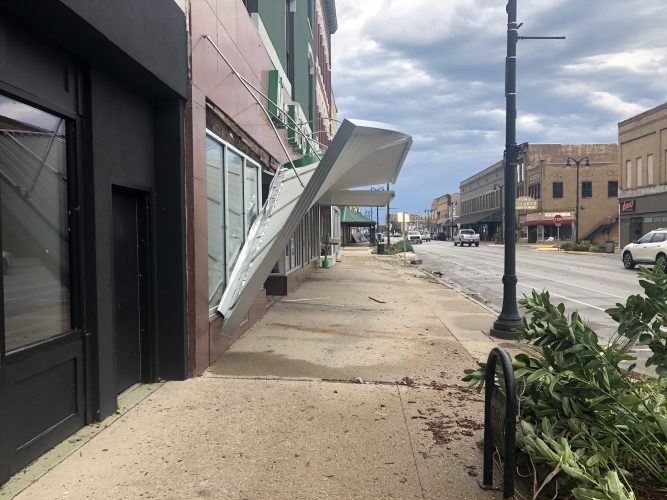 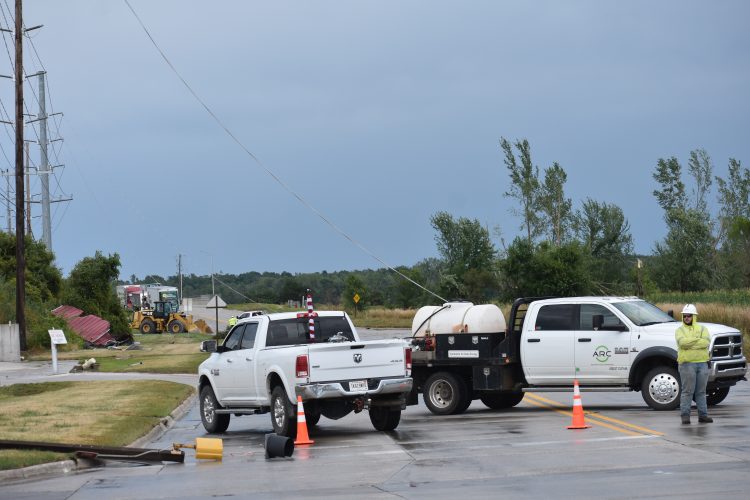 UnityPoint Health — Marshalltown experienced building damage at both the North and South campuses caused by the ... 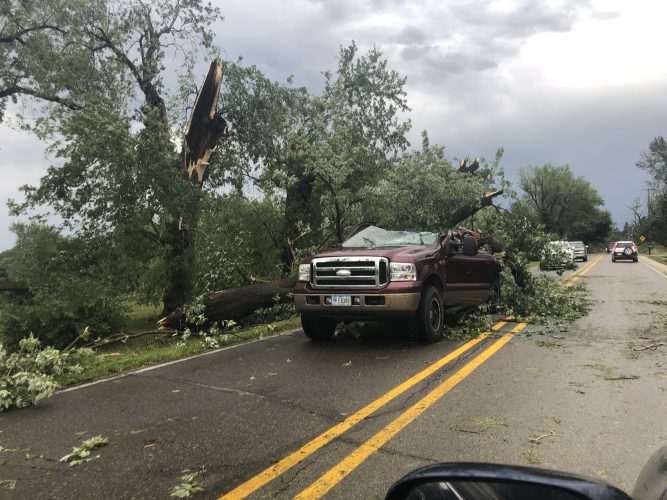 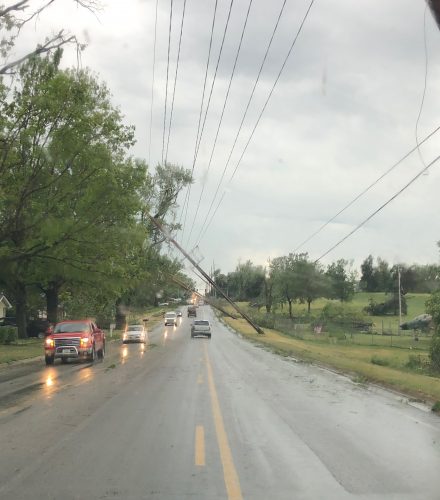 All good: WNBA has reported no positive coronavirus tests