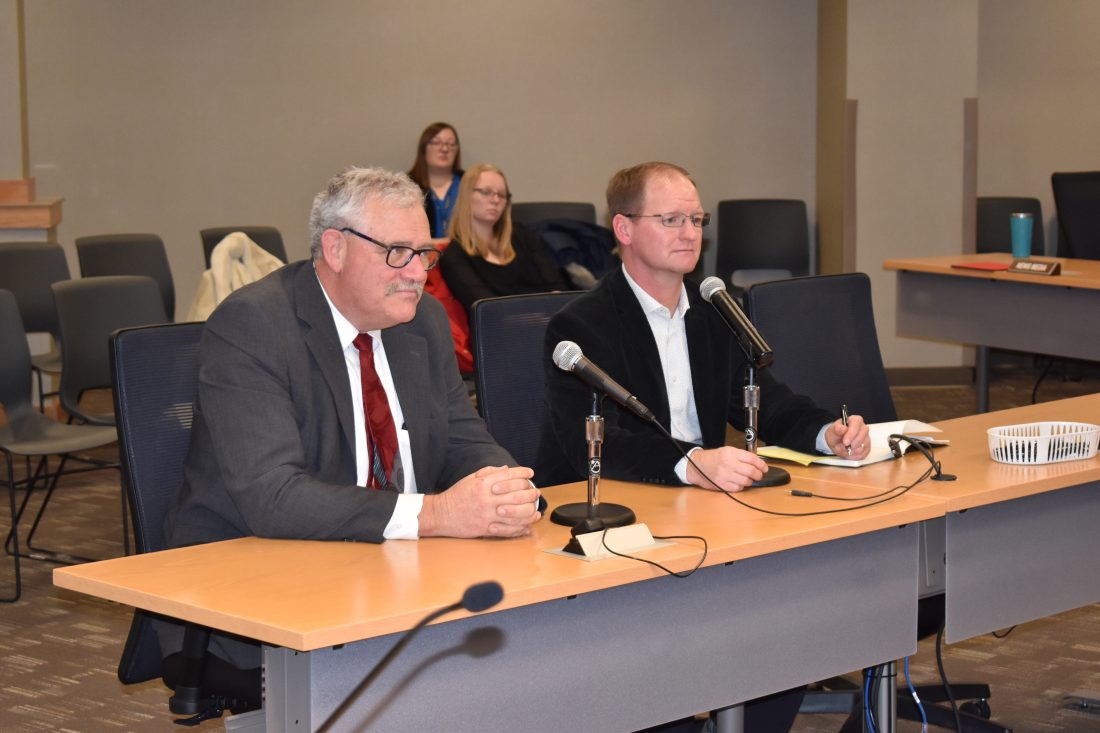 T-R photo by Lana Bradstream Iowa legislative members Mark Smith and Jeff Edler tell the Marshalltown School Board what they hope to accomplish during the 2020 session in Des Moines.

Mental health was front and center at the regular Marshalltown School Board meeting on Monday.

A new focus on student mental health was placed in the last year and a half. Director of Special Service Matt Cretsinger told the board that the new system the district has in place is innovative and other districts across Iowa are studying what Marshalltown is doing.

Citing such information as the 2018 Iowa Youth Survey in which a larger percentage of students indicated suicidal tendencies, Cretsinger said the district has placed extra focus on social emotional learning. Not only did the district have the data from the survey, but also office referral, suspension and expulsion data and more.

“As we looked at office referrals, out of school suspensions and the number of students who were dropping out, we absolutely thought we could do better,” Cretsinger said.

Previously, when students would misbehave in class and negative consequences were doled out, Cretsinger said improvement in behavior was noted for the next 24 hours, but eventually the student would revert to the wrong behavior. By placing focus on correct behavior, Cretsinger said they have seen improvement overall.

The district partnered with the local AEA, as that entity was studying the same information and what would be the best course of action to take. Cretsinger said through the collaboration, they learned how a child’s mind learns and responds to situations.

“We had to hold kids accountable but we also had to do things in addition,” Cretsinger said.

Since the district implemented the new social emotional learning system, Cretsinger said there has been an 8.3 percent, or 344 less, office referrals in the last school year. The average number of times a student needed to be restrained or secluded reduced by 12 per month and the dropout rate decreased by 15 students.

State Sen. Jeff Edler (R-State Center) and Rep. Mark Smith also updated the board about what they expect to see in the 2020 legislative session. The lawmakers are hoping the state will be more forthcoming in funding mental health and will also be more willing to help school districts handle really tough or violent students.

Edler said he did not want to blur the line between mental illness and conduct issues.

“They are two very separate things,” Edler said. “We are dealing with two separate issues at once.”

School board president Bea Niblock said looking at mental health issues of one child is not the entire picture, either.

“I have witnessed the number of behavior students who have impacted the learning environment to student achievement becoming less in that classroom because of that. So when you’re talking about mental health we’re talking about the other 20 to 25 students in the classroom. We’re talking about involving all of our administration, our teachers. There’s a high impact and return on any kind of mental health implications we can assist in. It’s not just the student and his or her family,” Niblock said.

The school district received a full refund of assessments from a year and half ago from the Internal Revenue Service of $642,149.61. Schutte said the district was pleasantly surprised all of the fees and penalties were accrued.