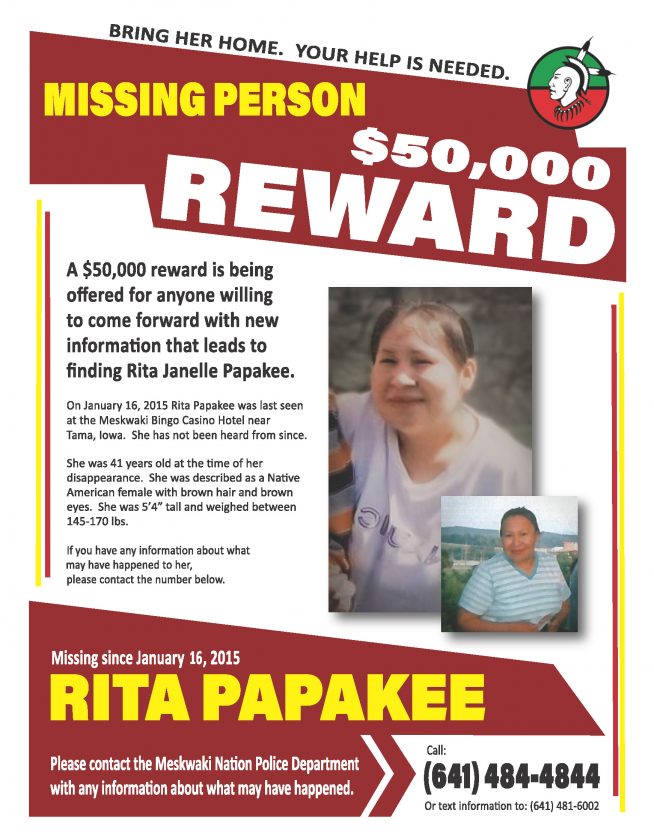 Meskwaki Settlement — Five years ago on Jan. 16, 2015, Tribal member Rita Janelle Papakee was last seen at the Meskwaki Bingo Casino Hotel. She has not been heard from since.

Over the years, extensive searches on the Meskwaki Settlement and in nearby towns failed to turn up any clues to her whereabouts. Her suspicious disappearance caused tribal officials to offer a $25,000 reward. However no one came forward with any credible information as to what may have happened. Since that fateful day, there has not been a single trace of Papakee.

Last year on the fourth anniversary of her disappearance, tribal authorities increased the reward to $50,000.

On Wednesday, near the fifth anniversary of her disappearance, tribal officials, the Meskwaki Nation Police Department, and her family are asking for renewed help in finding her. They urge the people with that knowledge to speak out.

“With this case update, I am finding a balance between providing relevant information to the community and maintaining the integrity of the investigation,” Meskwaki Nation Police Department Chief of Police Jacob Molitor said.

“At this point thousands of hours have been spent between the Federal Bureau of Investigation, Iowa Department of Criminal Investigation, MNPD and other agencies.

Based on the information discovered and released by the department, Molitor believes that there are only a select few people with information authorities seek in regards to Papakee’ whereabouts.

He thinks just one solid tip could propel the investigation forward.

“We do not know when that day will come,” he said. “Hopefully, for the sake of the family and the community, it will be sooner than later. We plead to the community for information about this case.”

In May 2019 the family, with the help of Tribal Council and the MNPD, contacted the Sahnish Scouts, a not-for-profit organization specializing in search and recovery efforts.

They led a week and a half search of various Settlement and Tama County locations.