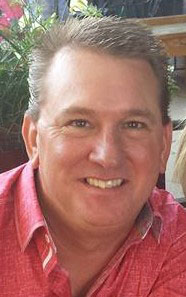 Trent Davis, 52, of Marshalltown, a man who knew no strangers (and also loved to share a beer with each and every one of those people!) passed from this life on Sunday, November 3rd, in the peace of his home in Marshalltown.

Funeral services will be held at 1:30 p.m. Tuesday at Grace Church, 3111 South 6th Street, Marshalltown. Visitation will be held from 5-8:00 p.m. Monday at the church. Memorials may be directed to his family. For condolences, please visit www.mitchellfh.com. The Mitchell Family Funeral Home is caring for Trent and his family. Ph. 641-844-1234.

Born Trent Duane Davis on August 23rd, 1967, in Marshalltown, he was the son of Ronald and Beverly Jane (Hines) Davis. He graduated from the Marshalltown High School in 1986, and attended ISU for three semesters (until his social activities ended that!).

On April 26th, 1996, he was united in marriage to Kendra Godfrey-Davis in Las Vegas. They were blessed with two wonderful children- Kallie and Cole.

Trent was a successful broker in the raw/coiled metals profession for over 26 years, gaining friends and contemporaries from all around the country. Following that colorful career, he followed his heart and founded Thunder Services in Marshalltown providing building materials, installations and home owner services. He was operator at the time of his passing.

He will be remembered by many for his love of his children and family, playing golf, watching Cole play golf, playing pepper and pool, love of friends and always willing to lend a hand. Trent was a member of Elmwood Country Club.

Left to cherish his memory are his children- Kallie Davis, of Ankeny, Cole Davis, of Marshalltown; his sister Teresa Davis (Jerry), of Navasota, TX, niece Courtney Thogersen, nephew Jens (Katherine) Thogersen and their children Carter and Sebastian and numerous cousins and friends.

In death, Trent rejoined his parents and grandparents.