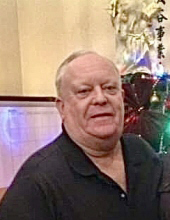 Steven “Perky” Perkins, 72, of Marshalltown, Iowa, passed away on Monday, March 16, 2020, at MercyOne Medical Center with his family at his side.

In light of the statewide mandate from Governor Kim Reynolds concerning the COVID-19 that was given on Tuesday, March 17, 2020, stating that no public gatherings over 10 people should take place, there will be no public services and cremation rites will be accorded. The family encourages friends to share stories about Perky on the funeral home website at www.mitchellfh.com. In lieu of flowers, please make memorial contributions to Iowa River Hospice in Steve’s name. Mitchell Family Funeral Home is caring for Steve and his family.

Steven Leroy Perkins was born October 23, 1947, in Marshalltown, Iowa, to parents Walter and Margaret (Scovill) Perkins. He was the oldest child born to the family. He attended school in the town where he grew up graduating from Marshalltown High School with the class of 1965. In 1966, Perky was drafted into the United States Army and served as a Communications Center specialist during the Vietnam War. He was honorably discharged from the Army in November of 1968.

In November of 1969, Steve was united in marriage to his wife Marcia Norman at the Marshalltown Friends Church. The two began a life together having their only child Lisa Michelle. Steve was known to be very patriotic and always flew the flag proudly at his home and was a member of the Marshalltown American Legion Post. He worked for Lennox in Marshalltown for over 40 years as the group leader in the stockroom.

Perky enjoyed a wide variety of activities throughout his life including going to Vaughn’s Pub to be with friends and being the one to organizing “pools” for sports. He loved to cook and share with family and friends. He loved to cheer on his favorite sports teams which included the Iowa Hawkeyes, Anaheim Ducks, Chicago Cubs and Da Bears. He was great at being an “armchair coach.” When he was able to he enjoyed hunting, fishing, bowling, softball, golfing and racing with his ‘cuda.’ Most importantly, he loved to share photos of his family with his friends because he was so proud of them and their accomplishments.

Left to cherish his memory are his wife Marcia; his daughter Lisa Michelle (Joe) Huff and his granddaughters Macy and Marin Huff.

He was preceded in death by his parents Walter and Margaret Perkins; both paternal and maternal grandparents and his brother Kenny Perkins.