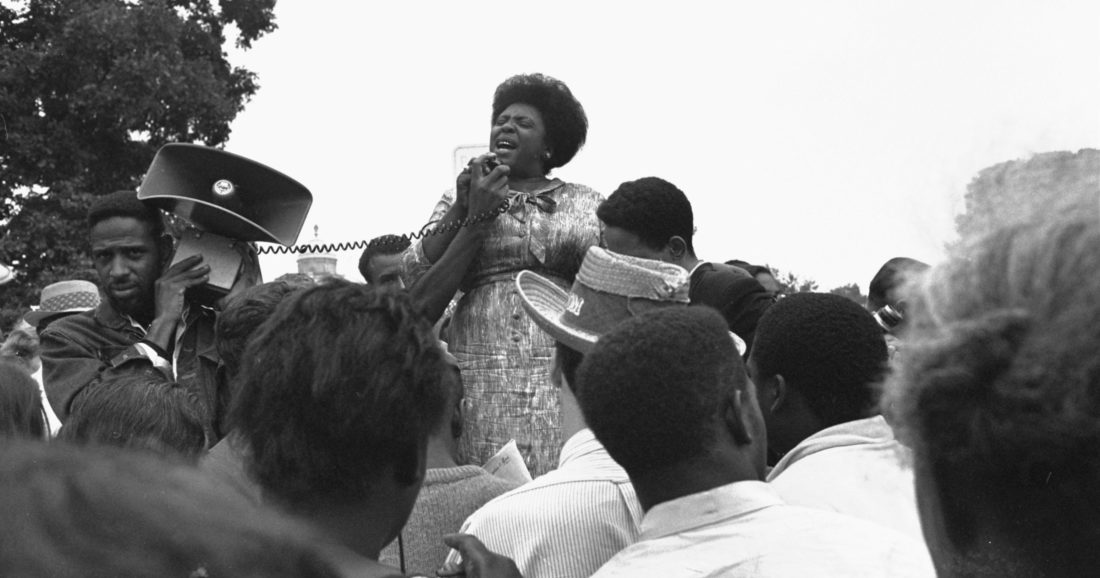 The summer of 1964 — known as Freedom Summer — was a grassroots movement in the Deep South that sought to help African-Americans overcome legislative and communal barriers in registering to vote. Knowing Mississippi’s establishment Democratic Party would bar them from participating in the 1964 Democratic Convention in Atlantic City, N.J., delegates from the newly formed Mississippi Freedom Democratic Party (MFDP) went to the convention anyway to share their progressive ideals and plead their case to have voting power in place of the segregated party. While civil rights proponents Dr. Martin Luther King, Jr. and other prominent leaders spoke on behalf of the MFDP before the Credentials Committee on the night of Aug. 22, 1964, it was the heart-wrenching, 13-minute speech given by activist Fannie Lou Hamer that painted a painful, graphic portrait of America’s race problem. She recounted her life story as an impoverished sharecropper in rural Mississippi, who had endured death threats and police brutality for trying to register to vote. After being beaten and sexually assaulted by law enforcement in 1963 in a Winona, Miss. jail, she was left with permanent kidney and eye damage, as well as a limp. Fannie Lou Hamer is a woman you should know.

Her brave and heroic words were such a paradigm shift in the country’s power structure in addressing race relations, that President Lyndon B. Johnson cut in on her live testimony to divert attention away from the convention, in a shameful attempt to silence her voice.

She was born Fannie Lou Townsend in Montgomery County, Miss. in 1917, the granddaughter of a former slave, and the youngest child of her parents Ella and James Lee’s 20 children. By the age of six, young Hamer worked in the cotton fields, only completing her schooling through the eighth grade. In 1944 she wed Perry “Pap” Hamer, residing on the Marlow plantation outside Ruleville, Miss. When Mr. Marlow learned Hamer could read and write, he made her the record keeper of the plantation. Hamer remained in his employ for almost 20 years until she was fired and removed from the property after Marlow learned she had been trying to register to vote. In 1961, after having a uterine tumor removed, she was sterilized without her consent; a phenomenon she would term as receiving a “Mississippi Appendectomy.”

In early 1963, Hamer became a field secretary with SNCC (Student Nonviolent Coordinating Committee), attending citizenship training school in South Carolina, sponsored by the SCLC (Southern Christian Leadership Conference). It would be her experience on the bus ride home from one such training session that she would share before the Credentials Committee that hot summer night in ’64.

Hamer co-founded the MFDP and served as its vice chair. She had gained a local following through her sincere, plainspoken speechmaking, and for leading groups in song. She favored “This Little Light of Mine” and “Go Tell it on the Mountain.” At the convention, Martin Luther King, Jr. spoke on behalf of seating the MFDP, as well as Rita Schwerner, the widow of Michael Schwerner, one of the three civil rights workers who had been murdered by the Ku Klux Klan earlier that summer. Then it was Hamer’s turn to speak.

Hamer awkwardly sidestepped around white men who refused to push in their seats to allow her to pass by on her way to the mic. She plopped her white purse on the table before her, took a seat, and introduced herself, also reciting her home address on national television. She spoke before the audience in her Southern drawl, unaccompanied by any notes, and told her story. On June 9, 1963, the bus Hamer and fellow activists were on was stopped by the Mississippi State Highway Patrol at a rest stop in Winona. She related being thrown in a cell, listening to the sounds of people being lashed echoing through the jail — until it was her turn.

Then, Hamer’s voice grew in strength.

“I was in jail when Medgar Evers was murdered. (The SCLC was finally able to post their bail four days later). All of this is on account of we want to register, to become first-class citizens. And if the Freedom Democratic Party is not seated now, I question America. Is this America, the land of the free and the home of the brave, where we have to sleep with our telephones off the hooks because our lives be threatened daily, because we want to live as decent human beings, in America?”

But this harrowing account never aired in its entirety live on television. When President Johnson saw Hamer was about to speak, he called an impromptu press conference, preempting her testimony. Some in the press corps thought LBJ was about to announce his vice presidential pick, but Hubert Humphrey would have to wait a little longer for that news. When the cameras cued to the White House, LBJ gave a rather bizarre and long-winded statement, saying he wanted the American people to know that day marked the nine-month anniversary of the Kennedy assassination. When the president thought Mrs. Hamer was done speaking, he abruptly ended his speech, and the cameras returned to convention coverage, just as Hamer was stepping down from the the mic. But his plan backfired.

The men and women of the press corps — the folks, who since the days of the Montgomery bus boycott had brought the raw coverage of the movement to everyday people — hadn’t let Hamer’s testimony go unrecorded. It aired on every newscast later that evening.

LBJ entrusted Humphrey to offer the MFDP a compromise: the establishment Democratic Party would be seated as Mississippi’s delegates if they would agree that after 1964, no delegates would be chosen based on race; and two members of the MFDP (chosen by LBJ) would be given special at-large delegate positions. The president forbade Hamer from being one of those two delegates, telling Humphrey he “would not let that illiterate woman speak on the floor of the Democratic convention.” Minnesota’s Attorney General at the time, Walter Mondale, was selected to oversee this deal. The MFDP voted unanimously to reject the compromise.

“We didn’t come all this way for no two seats when all of us is tired,” Hamer famously retorted.

Hamer’s social activism didn’t end at the ’64 convention. In 1969, she founded the Freedom Farm Cooperative to provide an alternative to discriminatory sharecropping practices. She participated in marches, and traveled the country giving lectures. I firmly believe Hamer’s activism, and that of her contemporaries, heavily influenced the passing of the Voting Rights Act of 1965. She died on March 14, 1977, after a battle with heart disease and cancer. Her headstone is inscribed with her well-known mantra: “I am sick and tired of being sick and tired.”

Hamer’s full testimony is available on YouTube. I also highly recommend the 14-part award-winning documentary “Eyes on the Prize” in which Freedom Summer is chronicled in episode five: “Mississippi: Is This America?”

Sara Jordan-Heintz is a T-R staff writer. She can reached at 641-753-6611 or sjordan@timesrepublican.com