Bobcats look for win over rival Newton on Homecoming 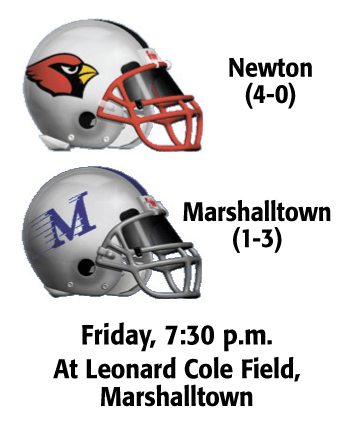 Homecoming week presents an interesting challenge for sports teams, particularly the football team, who’s game is one of the main attraction for all the festivities.

Lost in the pageantry and celebration sometimes is the fact that there is a team coming in to town to try and wreck the party, and Marshalltown football head coach Adam Goodvin said he is making sure his Bobcats don’t lose focus on the task at hand.

“I definitely make sure that they understand that our mission and our goal is to win a football game on Friday,” Goodvin said after practice on Wednesday. “I have told them to embrace all the energy and emotion that comes out of this week, it wasn’t long ago that I was playing in Homecoming week and it was a big week. It got everyone excited but the No. 1 goal is to go out and win on Friday night.”

It just so happens that the team coming in to spoil things for MHS is longtime rival Newton. When the Bobcats and Cardinals face off in their opening game of Class 4A District 4 play, they bring a lot of familiarity with one-another. Goodvin said the team knows just what Newton wants to do on the field, and it’s up to the players to stop that from happening.

“It’s your typical Newton team, you are going to get the hard-nosed, tough kids that are going to go out and hit you,” Goodvin said. “That’s their style and they’ve bought in to that, to be able to compete with that you have to be hard-nosed and tough like them. You have to go out and face it head on. We have been preparing for that and hopefully we can do that on Friday.”

The Cardinals bring the physicality in the form of a rushing attack that’s already put up over 1,600 yards in their first four games. Newton boasts four players who have over 270 yards rushing, and those four have combined to score 19 rushing touchdowns on the year.

Defensively, the Cardinals are an opportunistic team, recording 11 turnovers so far with six interceptions and five fumble recoveries.

Goodvin said the team has a plan in place to exploit some of the Cardinals flaws on defense, and if they can cut down on mistakes the Bobcats have a chance to come away with a Homecoming victory.

“We believe we have a good game plan set in stone here and we can go out on Friday and execute that,” he said. “We need to do a better job of moving the chains and executing and up front being tough on the O-line and setting the tone. Hopefully we can go out and put some points on the board, I have confidence in the guys and I know they believe in themselves and we will be able to do that.”

Marshalltown was able to limit turnovers in its last game against Waterloo West, losing just one fumble on the night, but that didn’t stop the Wahawks from coming away with the 56-14 victory. Goodvin said that loss had more to do with Waterloo West’s athletic advantage, something the coaches will have to make up for moving forward.

“Give credit to Waterloo West, they are a fast team and they have some great athletes and our guys unfortunately didn’t compete as well as we can,” he said. “I was proud of how we answered that first touchdown with one of our own and we were excited and the guys were excited but unfortunately things just went south for us. We have to do a better job all around of handling adversity and coming back and competing.”

The Bobcats host their Homecoming match against Newton on Friday starting at 7:30 p.m. at Leonard Cole Field.