And then there were 2 Trojans 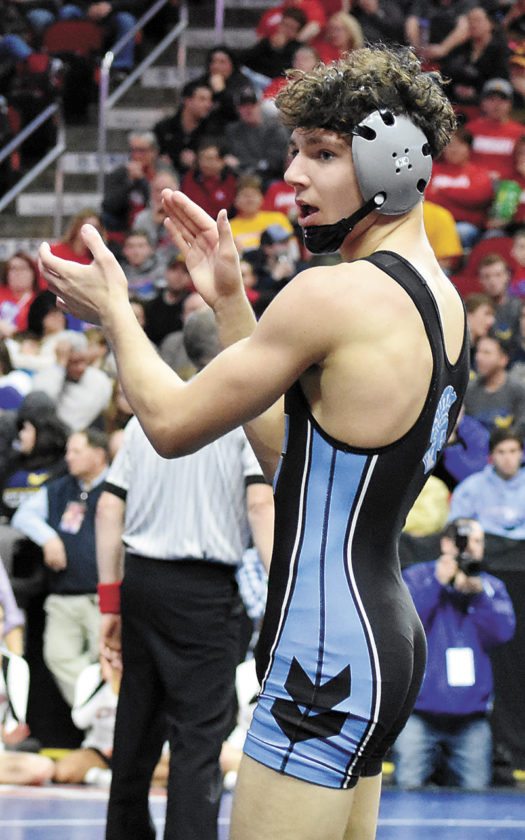 T-R PHOTO BY THORN COMPTON • South Tama County senior Brady Fritz claps after closing out a 5-2 decision over Jack West of Winterset in the Class 2A 132-pound semifinals on Friday at Wells Fargo Arena in Des Moines. Fritz wrestles for a state title tonight.

DES MOINES — To start the second day of action in the Iowa High School State Wrestling Championships, the South Tama County wrestling team had five out of six competitors still in the mix in Class 2A.

That fact held throughout the day, as every Trojan left won at least one match and staked a spot on the podium on Saturday.

Leading that crop was seniors Brady Fritz at 132 pounds and Isaac Judge at 152, as both will represent South Tama in their respective finals tonight.

This is the first time the Trojans have had two finalists at state since 2003, when head coach Nate Van Dyke won state at 152. Van Dyke said his guys are showing Iowa once again what Trojan wrestling means.

“I think our boys represented us well, I think there is a lot of fight out there and I think they are competing pretty hard,” Van Dyke said. 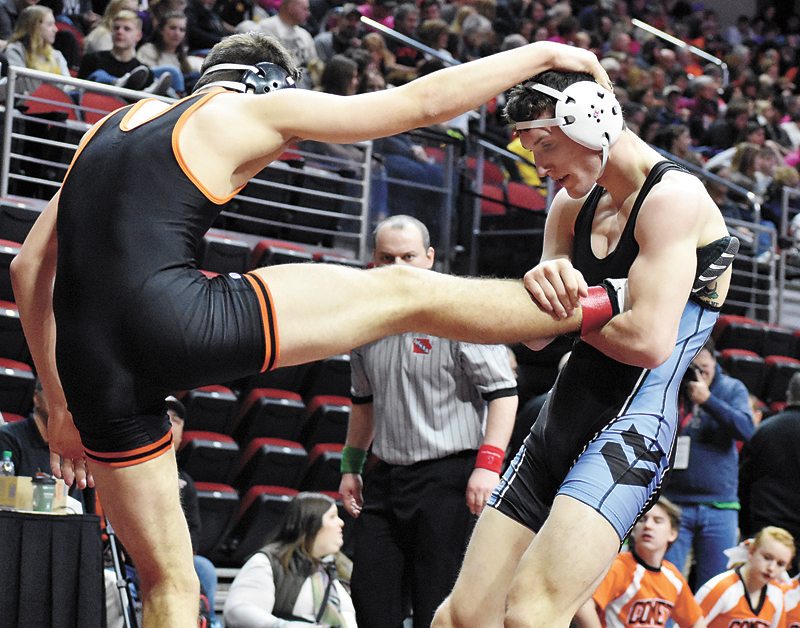 Judge enters the finals as the defending champion, meaning he knows what it takes to get things done in the final match. He handled his way through the quarterfinals on Friday morning with an 11-3 major decision over Dylan Koresh from Charles City, then he faced off with an old rival from West Liberty in Joe Kelly. The clash between No. 1 Judge and No. 3 Kelly with the winner moving on to the finals was bound to be a good one, but Judge maintained his composure throughout and managed a solid 4-1 decision.

After his match, Judge said he managed to pull out the victory against the man who beat him in districts their sophomore season by sticking to his gameplan.

“The second period I knew he couldn’t ride me and he got hit for stalling and that took a toll for the worst, then I scored some more,” Judge said. “Other than that I was just able to turn it on in the second and just start getting my points.”

Van Dyke said it’s always tough to face off with an opponent you’ve see quite a bit in the past, but Judge did a great job against Kelly.

“Really smart match from Isaac, the more you wrestle an opponent the closer it can get and you get a little familiar with each other,” he said. “I thought he wrestled really smart and he was really super confident going in. He is really confident right now.” 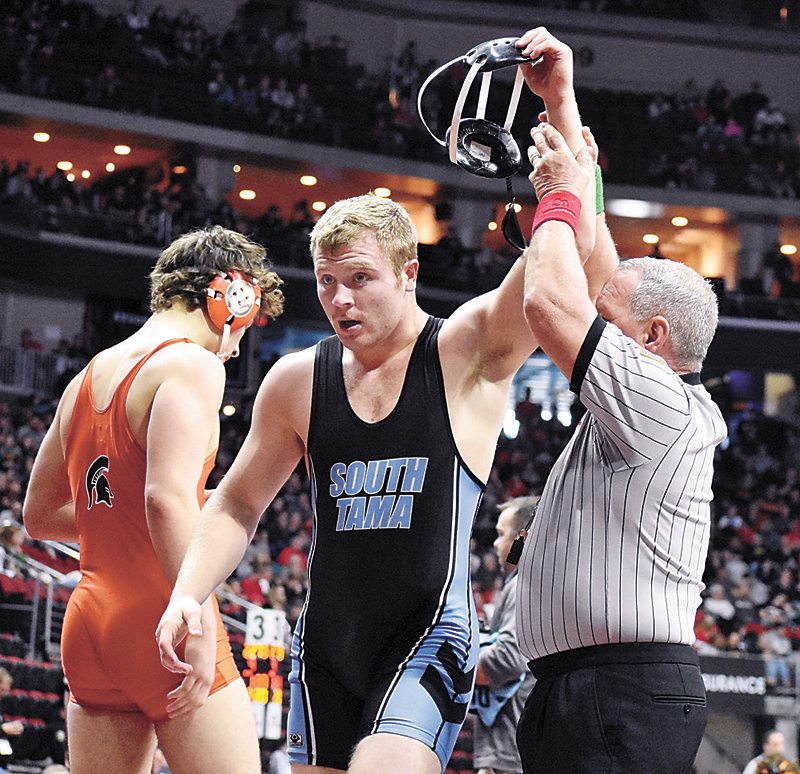 While Judge is wrestling in his second-straight finals, he won’t be alone this time, as Fritz traversed a treacherous path with ease on the night, downing No. 1 Will Esmoil from West Liberty in the quarterfinals by a 5-1 decision then taking care of business against Jack West from Winterset in the semifinal with a 5-2 decision.

Fritz, ranked No. 5 at 132, said he never doubted his ability to take out anyone who comes before him, even if it’s the top-ranked opponent in 2A.

“He’s the No. 1 kid in the state but you have to beat him and you have to beat everyone in the tournament to get to the finals so it was a fun match,” Fritz said. “It’s been a fun ride but I’m not done yet.”

Since he has never been this far in the tournament, Fritz said he’s already been picking the brains of Judge and Van Dyke, two people who know what it takes to win a championship finals.

“[Isaac] has already been talking to me about it, just keeping the emotions normal, keep flowing and keeping calm all day long because it’s a long day,” Fritz said. “Just keep calm and right before finals match you’ve got to keep going.”

Both guys will be facing opponents they haven’t seen this season, as Fritz takes on Matt Robertson from Davenport Assumption and Judge faces Kyler Rieck from Spirit Lake Park.

Judge said it doesn’t matter who he faces in the finals, he just knows he has to stick to what makes him successful.

“I need to just wrestle my to my ability,” Judge said minutes after learning who his opponent was. “I don’t know anything about him, I don’t even know his first name, so I just need to wrestle to my ability and have fun with it. Hang loose.”

Senior Tanner Probasco had a shot at joining Fritz and Judge in the finals, but he lost in the semis at 138 to No. 2 Jarrett Miller from Ballard by a second-round pin. Not only was that first loss of the tournament for Probasco, it was the first loss of the season, as he stood at 28-0 after a win in the quarterfinals over Cam Rice from Columbus/WMU.

Van Dyke said Probasco is a tough kid, however, and he fully expects him to come back ready to wrestle for a third-place finish.

“He is smart, he’s mature, he’s tough, he’s resilient, he’s going to bounce back,” Van Dyke said of Probasco. “He has got all the way until tomorrow morning to think about it so it’s not like he’s going out there an hour later and has to get his mind right. He’s a great kid, he’s going to turn around and he’s going to compete his hardest tomorrow.”

Colton Vest at 145 and Dalton Rosenburg at 182 both started the day in the consolation rounds, and both earned victories to secure at the very least eighth place. In the consolation quarters, both ran into trouble, as Vest lost an 11-8 decision to Joey Busse from Humboldt and Rosenburg fell to Ben Lee from Ballard by a second-period pin.

Even with those losses, the Trojans have a chance to do something special as a team, as they currently sit in second place with 60 points, behind Dububque Wahlert with 79.

Van Dyke said a team state title would be a fantastic way to cap the year, but he wants his guys to just focus on doing the best they can individually.

“The team hunt is wide open I think in 2A, and we know that,” Van Dyke said. “We are not focused on that, we are focused on our individual performances, if we can knock some people off along the way and keep winning, I don’t know if those two matches on the backside will hurt us a little bit because the best they can do is seventh, but I think the team stuff will take care of itself. I told them I don’t need that, but I want you to be successful and it would be awesome for your school.”

South Tama will have five guys going in the final day of action at Wells Fargo Arena today, starting with consolation matches at 10 a.m.