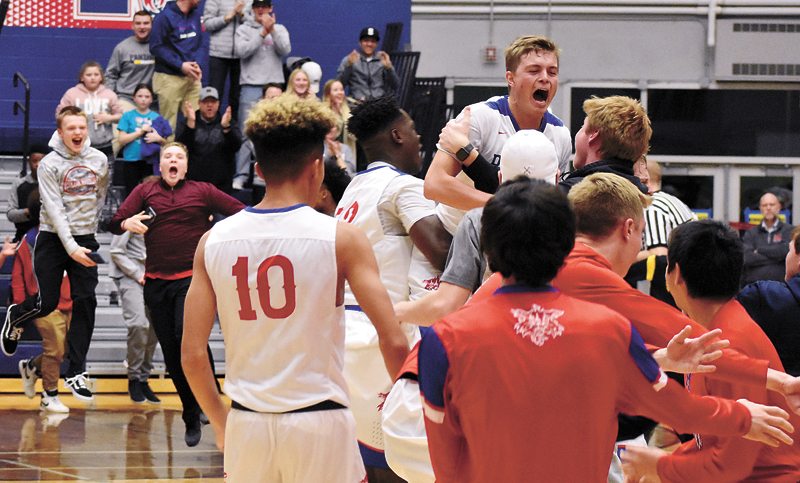 T-R PHOTO BY THORN COMPTON • The Roundhouse erupts as Marshalltown boys’ basketball players — including Jacob Smith, top — are mobbed in the middle of the court after the Bobcats beat Class 4A No. 3 Des Moines North on a late layup by Luke Appel on Friday night.

There have been numerous heartbreakers at the Roundhouse this season for the Marshalltown boys basketball team.

Against Urbandale in January, the Bobcats took a lead with seconds to spare, only to see a J-Hawk shot drain in at the buzzer to hand them a 60-59 loss.

Against Johnston two weeks later, MHS led late but saw the Dragons crawl all the way back to take a 54-51 win.

So on Friday night when Luke Appel hit a shot with five seconds left to give the Bobcats a 62-61 lead over Class 4A No. 3 Des Moines North, no one felt comfortable until after a shot from Jaihon McCaleb behind the 3-point line went long and the buzzer finally sounded.

Then all hell broke loose. 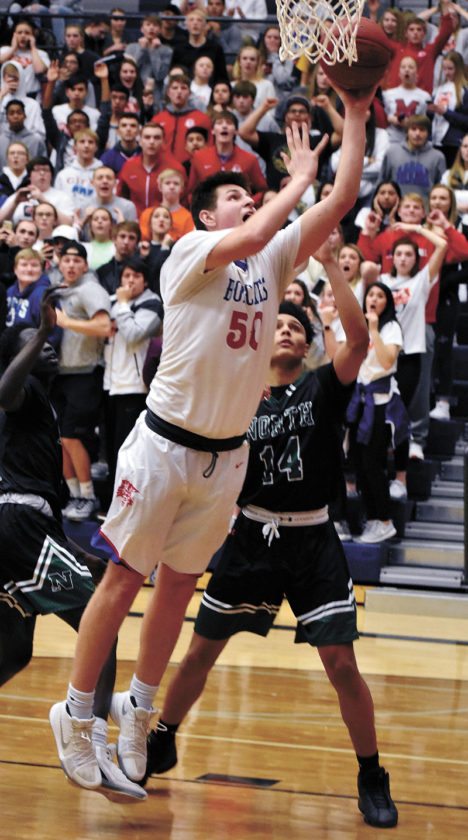 The Bobcat fans and students, who turned out well for the final game of the regular season, rushed the court as the Marshalltown athletes celebrated an emphatic win over a highly-ranked opponent.

After enjoying the celebration with friends, relatives and teammates, Appel said even after making the game-winning shot he knew North’s Tyreke Locure — currently third in scoring at 4A with 27.5 points per game — was going to do everything in his power to win this game, so he had to stop the talented junior.

“When we made it I knew we were up one and I knew Tyreke was going to go, so I first tried to get on him right away,” Appel said. “He got by me but he ended up passing off to his teammates and I just tried to contest that because we lost to Urbandale by a buzzer-beater and I was praying it wouldn’t happen again and luckily it missed.”

Appel led the way for the Bobcats (7-13) in his final home game with 27 points, while fellow senior Josh Melde had 10 and junior Jacob Smith finished with 17.

Marshalltown had to fight back at halftime, but after the Polar Bears (19-3) hit two free throws at the end of the second quarter, Melde drove all 94 feet for a layup right as time expired, reducing the deficit from eight to six and foreshadowing the dramatic finish. 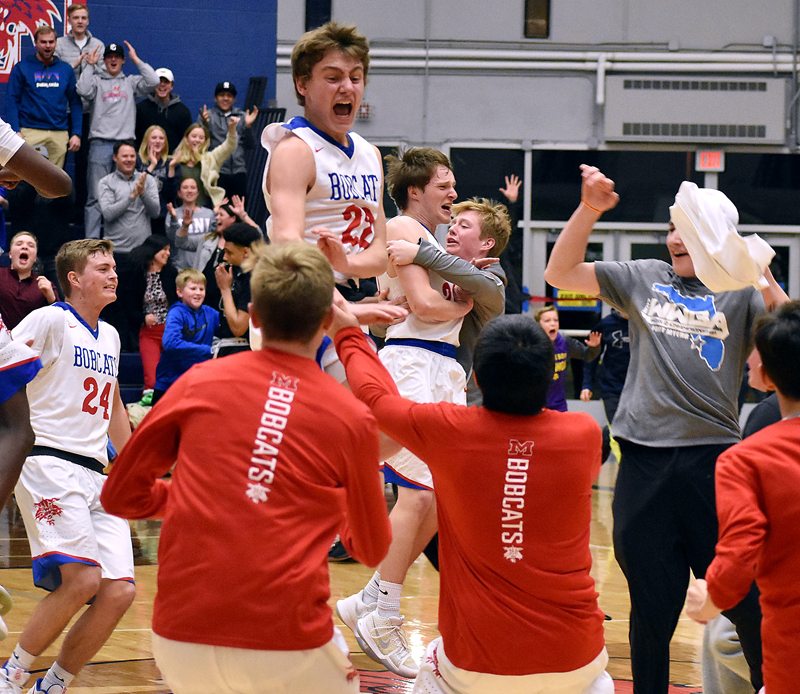 Melde said that shot was important because it swung the momentum back to the Bobcats’ favor.

MHS head coach Scott Smith, who had a smile plastered on his face a mile wide after the game, said he couldn’t have asked for a better way to finish up the season at home.

“The kids have worked so hard and we have lost so many close games and they really deserve this,” Smith said. “I give credit to all those seniors, a lot of those guys don’t play a lot of minutes but you could just feel the energy in the locker room before the game and I just thought the environment tonight was the way it should be for a high school basketball game. Two great teams going at it, the student section is rocking, the pep band was rocking, crowd was into and the seniors responded.”

While the Bobcats were able to score buckets when they needed to, it was actually the defense that helped Marshalltown get back in the game. Locure went for a game-high 30 points, but only one other North player finished in double digits. What seemed to help stymie the powerful Polar Bear attack was the Bobcats going big, playing 6-foot-5 Maker Kuony and 6-4 Sunday Arou in to help Appel lock down the paint defensively.

Smith said, even though North had 13 more wins than his squad heading into this game, he thought there were some areas he could exploit.

“So much of it is about matchups, and we thought in some ways this was a better matchup for us,” Smith said. “We kept preaching that if we keep this game in the 60s we would have a shot, and sure enough we won 62-61.”

What was most encouraging, Smith said, was how his guys all responded at different times when called upon, whether it be Appel or Melde or guys like Austin Shomo or Bennett O’Hare. He said that kind of production from the lineup is a great thing heading into the postseason.

“It seemed like every time North made a run, somebody different stepped up,” Smith said. “Luke of course had his normal great game, Josh had a great game, I thought Jacob really responded well, Shomo hit a big three, Sunday came in and played excellent, just everybody. What a great springboard going into tournament play.”

Marshalltown will start postseason play in Urbandale on Monday at 7 p.m., as the Bobcats will look to avenge their heartbreaking loss to the J-Hawks last month by eliminating them on their home court.

T-R PHOTO BY ROSS THEDE • Grundy Center junior guard Hailey Wallis (12) gets the layup and is fouled by Aplington-Parkersburg’s Avari Everts (25) during the fourth quarter of Friday’s Class 2A Region 2 semifinal in Grundy Center. Wallis scored a game-high 17 points as the No. 8 Spartans advanced, 54-43.

T-R PHOTO BY THORN COMPTON • The Roundhouse erupts as Marshalltown boys’ basketball players — including Jacob Smith, top — are mobbed in the middle of the court after the Bobcats beat Class 4A No. 3 Des Moines North on a late layup by Luke Appel on Friday night.

T-R PHOTO BY THORN COMPTON • South Tama County senior Brady Fritz claps after closing out a 5-2 decision over Jack West of Winterset in the Class 2A 132-pound semifinals on Friday at Wells Fargo Arena in Des Moines. Fritz wrestles for a state title tonight.

T-R PHOTO BY THORN COMPTON • West Marshall senior 126-pounder Hunter Pfantz reacts after his 13-1 loss by major decision to Kole Hansen of Atlantic/CAM in their consolation second-round match on Friday at Wells Fargo Arena in Des Moines. Pfantz ended his senior campaign with a 40-8 record.