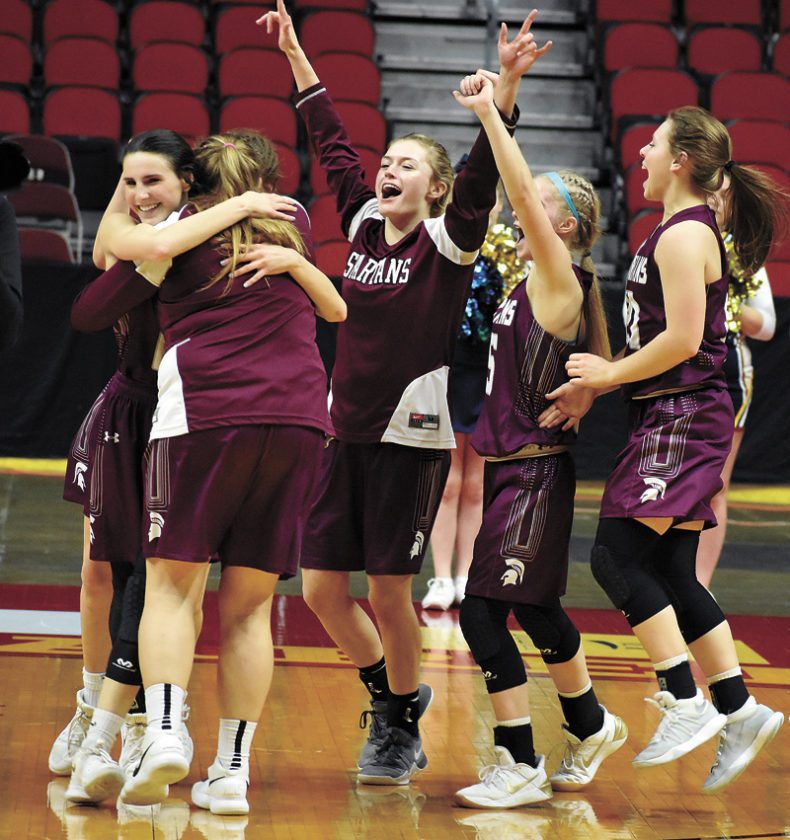 T-R PHOTO BY THORN COMPTON • Grundy Center players gather together after going through the handshake line to celebrate taking down Iowa City Regina in the first round of the Iowa Girls’ High School State Basketball Tournament on Tuesday night at Wells Fargo Arena in Des Moines. The Spartans advanced with a 46-45 win.

DES MOINES — The nightcap of day two of the Iowa Girls’ High School State Basketball Tournament featured a 2A matchup between No. 7 Iowa City Regina and No. 8 Grundy Center, with the Spartans making their first trip to the state tournament since winning the whole thing 13 years ago.

That close ranking played out on the floor, as neither team led by more than six throughout the night, but in the end it was Grundy Center who walked away the 46-45 victor.

Right before the game, the Spartans (23-1) learned that Regals’ leading scorer and rebounder Alex Wiese would be out for the contest, so it was important that the Grundy Center post duo of Kylie Willis and Brooke Flater have big nights, and the two came through, scoring 12 and 11 points respectively to record half of the team’s points.

After the game, Willis said her teammates were able to find her and Flater down low and they did the rest.

“Our team found us and we were really hot, it was just a good team effort,” she said. “We knew that we had to keep going and shooting the ball as much as we can and have confidence, and that’s what we did.” 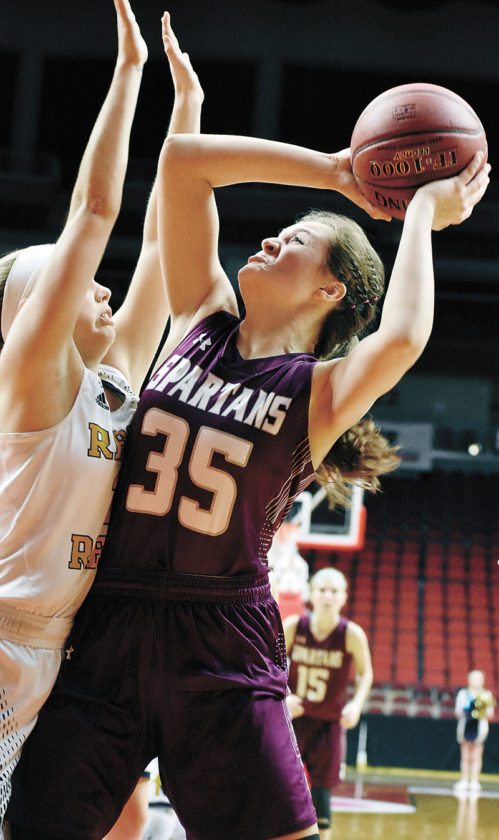 Flater said she and Willis have had a great connection playing in the front court together all season, and that continued on Tuesday night against Regina (21-5).

“We just knew we had to look for each other and if we got it in we would keep building confidence and put the ball up and keep moving it and having each other’s backs,” Flater said, “knowing where we like to go and those general things.”

The game didn’t necessarily start great for Grundy Center, after Mary Crompton splashed a three to start the game for the Regals and Hailey Wallis answered for the Spartans, Regina built up an 8-3 lead early on in the first quarter.

As they have all year though, the Spartans put their head down and kept working, leading to a 9-3 run to end the quarter with a 12-11 lead. That was an important run, because Grundy Center and Regina battled to a stalemate in each of the next three quarters, leading to the one-point Spartan victory.

Willis said that run to end the first was absolutely important because it let the girls get into rhythm. 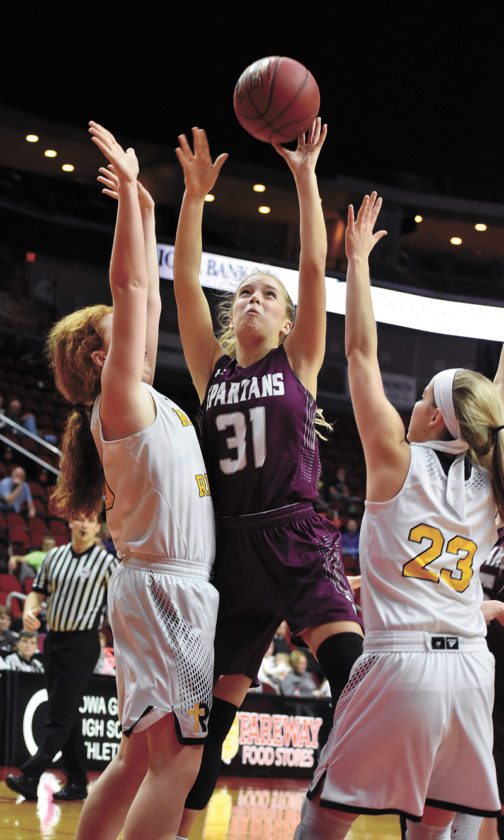 “That was great, we thrive off of making those runs and getting momentum and energy,” she said. “We are a team that loves to have energy and we really got those momentum swings at the perfect times.”

Grundy Center head coach Matt Lindeman said he was proud of the way his girls were able to continue to fight all night, especially Wallis not reaching double figures and Crompton going off for a game-high 20 points.

“Our posts really stepped up big tonight, we were able to get into the semifinals without Hailey getting into double figures,” Lindeman said. “So that was huge for us tonight and I just thought Kylie and Brooke stepped up big time and we did enough things right to try to hold Crompton down as well as we could.”

It was clear the Regals were going to do everything in their power to keep Wallis from beating them, but she said she didn’t mind having to find her teammates for scores because she trusts them.

“It was definitely a defensive game, I kind of knew they were going to come out and try to deny me a little more, but that’s perfect because I have four other people that I can dish it off to and they were going to score,” Wallis said, still trying to stop her elbow from bleeding after suffering a mystery cut suffered likely during the post-game celebration.

Regina head coach Jeff Wallace had one word to describe this Spartans team that denied his girls a third-straight trip to the state semis.

“Gritty,” Wallace said. “They are feisty, they share the ball with each other and they find a way to win. And they are winners too. They are a great team.”

The Regals actually had a chance to win the game, down one point with eight seconds left and the ball. They were able to put up a couple of shots in those eight seconds too, but none found the bottom of the net, leading to the Spartan win.

Lindeman said things didn’t exactly go as planned in that stretch, but he is happy it worked out.

“It didn’t play out the way we wanted it to, we had two more fouls to give so we wanted to be able to use a little bit of time and not make a bad foul where they were trying to shoot it or anything but that was our goal,” he said. “I am just really proud of how resilient these girls are and really proud of our post players. We had to work our tail off against Crompton because she was just kicking our butt all night and we knew she was so good. We did everything we possibly could to make it hard on her and she still put up 20.” 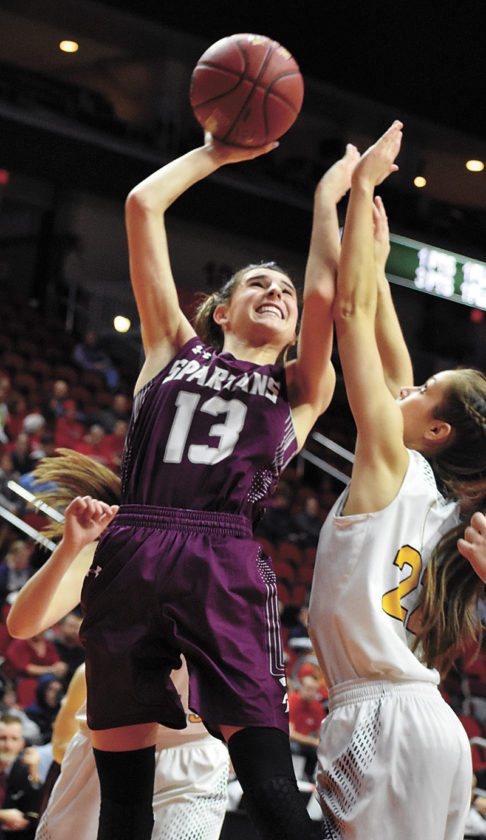 Now Grundy Center moves on to the semifinals to take on top-ranked Treynor, who beat West Sioux 54-30 in their quarterfinal showdown.

Wallis said, regardless of that outcome, she is just ecstatic to be playing down in Des Moines for the first time in her career and she wants to keep the run going.

“It’s so awesome, all our dreams are coming true. Not just mine but everyone’s,” Wallis said with a big smile. “It’s weird, we sat in the same spot every single year we came down here, and now that we are sitting on the floor it’s just so awesome. And now that we get to sit on the floor again it’s so surreal.”

That 2A semifinal matchup between the Spartans and Cardinals is set for a 10 a.m. start on Friday at Wells Fargo Arena.

T-R PHOTO BY THORN COMPTON • Grundy Center players gather together after going through the handshake line to celebrate taking down Iowa City Regina in the first round of the Iowa Girls’ High School State Basketball Tournament on Tuesday night at Wells Fargo Arena in Des Moines. The Spartans advanced with a 46-45 win.

Cascade or Dike-New Hartford vs. Panorama or North Union, 11:45 a.m.