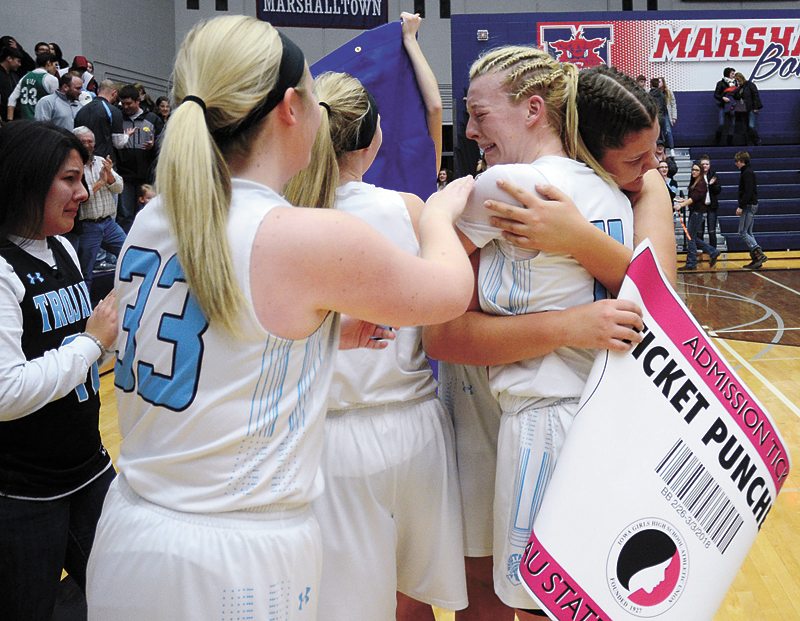 Throw out the Xs and Os. This game was about grit and determination, adversity and sacrifice.

South Tama County simply had a little bit more, and the Trojans draped in Columbia blue are getting their first trip to state in seven years as a result.

Musgrave made nine-straight field-goal attempts between the first and third quarters, keeping her team in the driver’s seat in spite of the carnage on the court. She scored nine of her team’s 10 points in the third quarter, including a rare 3-pointer, and helped STC play keepaway as best as it could down the stretch.

And when West Marshall’s last three desperation shots were off the mark, Musgrave, her teammates and first-year head coach Todd Dale erupted in celebration at center court. 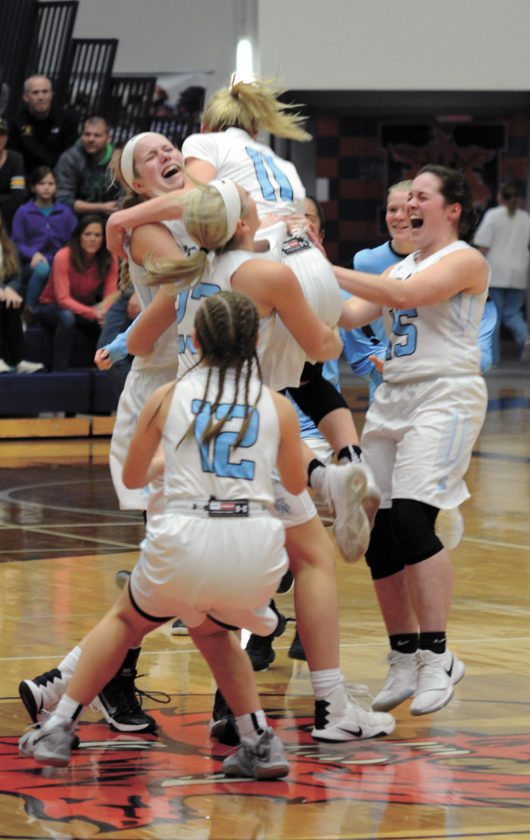 T-R PHOTO BY ROSS THEDE • South Tama County players celebrate at center court after the final buzzer sounded on the Trojans’ 38-36 victory over West Marshall in the Class 3A Region 7 championship game Saturday at the Roundhouse.

“I’ve had this dream since I was in Blue Pride with these girls, and we’ve played together since we were young,” said Musgrave, “and now we’re going to step on the Wells … It’s so unreal. The tears were flying.”

Both Trojan teams were playing in the regional finals for the second time in the last three years. West Marshall suffered back-to-back heartbreaks after falling by three to PCM last February and by two to South Tama on Saturday night.

Free-throw shooting played a pivotal role in the fourth quarter, which saw only one field goal — a Gradwell finger-roll layup that got West Marshall within three, 35-32, with 5:22 remaining. 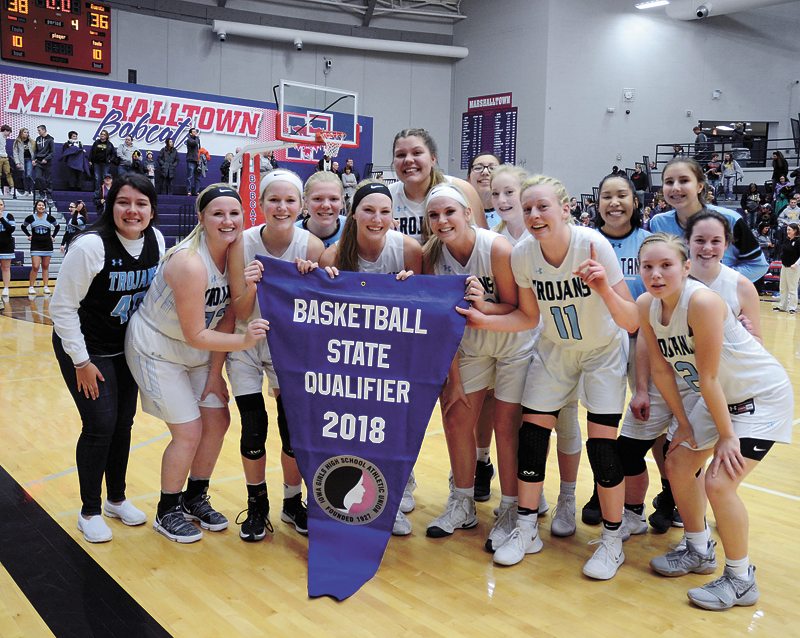 STC settled for a 6-of-12 free-throw effort in the final period, but West Marshall was 5-for-12.

Still, after STC freshman Tylese Rosenberger went 1-for-2 at the charity stripe and Kayla Cripps matched it for West Marshall, it was a two-point game with 39 seconds left.

West Marshall managed to steal the ball back with about 15 seconds left, and three attempts at tying the score were off the mark. Gradwell’s floater bounced wide, but right into the open arms of Karlyn Snider. Her putback caromed off the rim to Renae Schaper, whose well-contested short shot was left wanting as well.

“We hung in there, we didn’t roll over, we came back and had a chance at the end,” said West Marshall head coach Fred Zeller. “Three shots, we had our chances, but we kind of dug a hole for ourselves.”

Neither team led by more than five points in a game in which West Marshall (19-5) lost sophomore center Teresa Disney to an ankle injury in the first two minutes. Yet the Trojans donning black and gold had ample opportunity to get to their first state tournament since 2012. 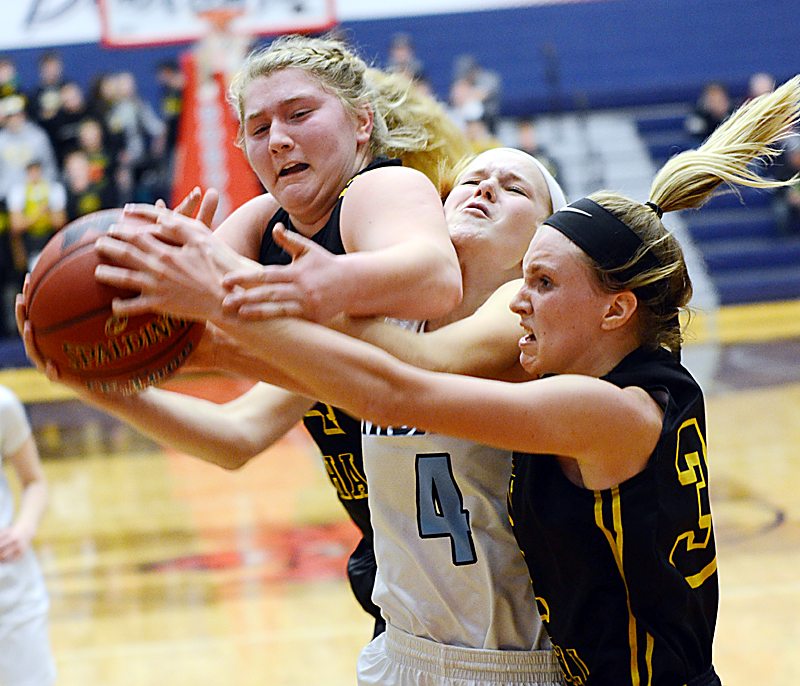 Her absence opened things up inside for Musgrave, who racked up five offensive rebounds and powered STC early with putback buckets from close range.

“Getting a player like Jessica and all the other girls around her is like getting a limosuine because it’s just awesome,” said Dale. “They may not score a lot of points but they do a lot of good stuff out there. Offensively, defensively, it’s just a great group around her.”

Taylor Ray’s long 2-pointer midway through the first quarter was the only South Tama field goal scored by somebody other than Musgrave. Yet the rest of the Trojans contributed 13 points at the free-throw line, including Sadie Smith, who piled up eight rebounds for STC.

“She didn’t do anything we hadn’t talked about,” Zeller said of Musgrave, who ranks fourth in 3A in scoring average (22 points per game). “She was just able to get to the basket. It seemed like she was always up on the boards. … Basically we didn’t slow her up as much as we had to. She’s a fine player, no doubt about that.”

Whether West Marshall chose to defend out of the 2-3 zone or in a man-to-man, Musgrave got the shots her opponents couldn’t afford to allow. And with Musgrave guarding Gradwell, STC’s defense held West Marshall to its second-lowest output of the season. 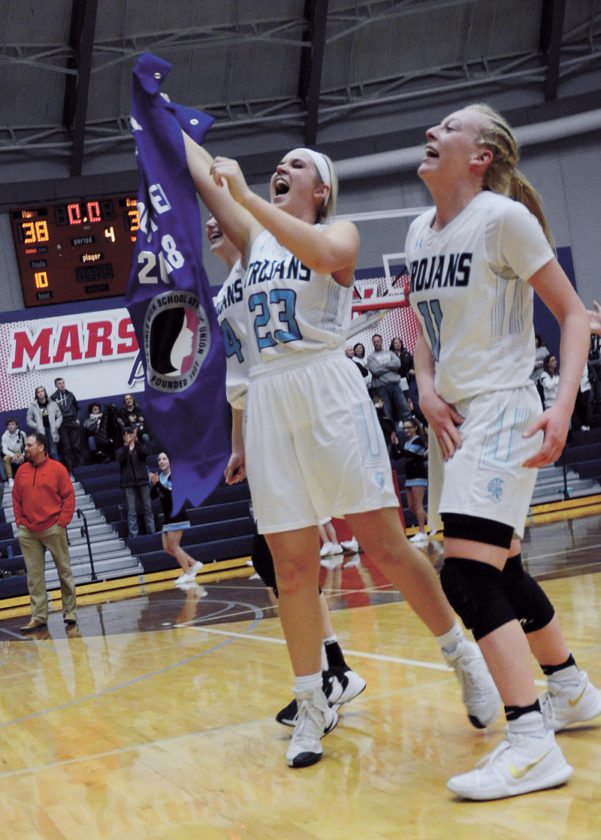 “We put Jess on her and let her take it away,” said Dale. “She did an awesome job defensively there. We wanted to be on [Gradwell] every time she got the ball, and we were there. That’s an awesome accomplishment for our defense.”

South Tama earned its lowest-scoring win of the season, too, in spite of West Marshall’s sturdy defensive effort — especially considering Disney’s absence for most of the game.

“It’s something you never practice, without her in the middle of the defense or rebounding,” said Zeller. “It was definitely big and we’ll always think if she hadn’t sprained her ankle we’d still be playing.

“We had a good year and a bad break.”

Aside from Musgrave, nobody scored more than three points (Rosenberger) for the STC Trojans. Zoee Buffalo pulled down four rebounds coming off the bench, while Ray tallied three assists.

“It was a rough contact sport game,” said Dale. “Everybody was on the floor and the ball was loose, it looked like a dogpile. It was just a physical game. We expected that coming in, we told them they had to be physical if they wanted to win and we played our most physical ballgame of the year.”