’Dogs chase away ’Cats in PKs 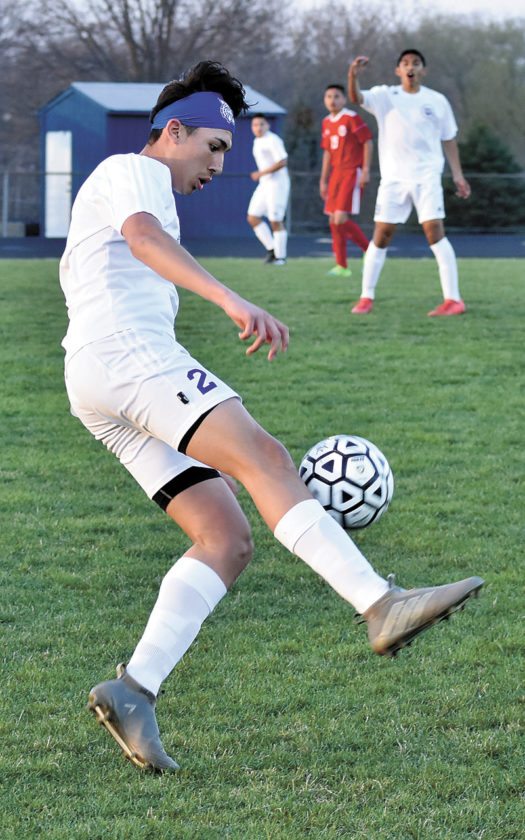 T-R PHOTO BY THORN COMPTON • Marshalltown midfielder Brandon Ordaz controls the ball during the first half of the Bobcats’ loss to Ottumwa at Leonard Cole Field on Monday.

In the first round of penalty kicks after the Marshalltown boys soccer team and Class 3A No. 14 Ottumwa had battled to a 1-1 tie in the first 100 minutes, it seemed the Bobcats would get a little revenge on the Bulldogs.

Last season, the two teams fought to a tie through 100 minutes at Ottumwa, where the Bulldogs came away with 3-0 victory in penalty kicks, and after MHS sophomore Jose Torres put his team up 1-0 after the first two shots this year, the script had all but flipped.

Unfortunately for the Bobcat faithful, Ottumwa made three of its next four penalty shots while holding Marshalltown scoreless the rest of the way, stealing a 2-1 victory away from Leonard Cole Field.

Bobcats head coach Chris Fuchsen said his guys shouldn’t have had to even go into penalty kicks, had he handled the in-game penalty shot during the first overtime period correctly.

“It’s one of those games where you just have to battle and fight through,” he said. “I definitely could have done a better job managing the boys, especially in the penalty kicks and the missed penalty in play that would have won it for us. It’s tough because the boys battled, they played, they deserved to win, but unfortunately you have to hit the target and you can’t kick it at the keeper.” 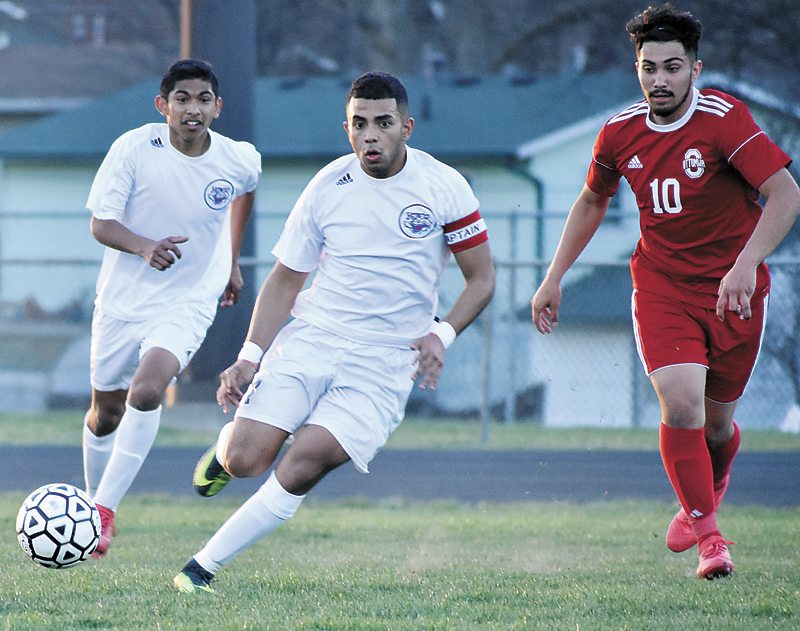 T-R PHOTO BY THORN COMPTON • Marshalltown senior Tony Angel, middle, chases for the ball during the first half of the Bobcats’ loss in penalty kicks to Ottumwa on Monday at Leonard Cole Field.

For this being a tie game at halftime, at the end of regulation, and at the end of two overtime periods, the Bobcats truly did dominate much of the contest.

Marshalltown (4-3) outshot Ottumwa (9-3) 20-12 and 15-6 in shots on goal, but both teams managed to score the same amount off of those attempts. Fuchsen said through much of the first half and into the second, his guys weren’t play their ball.

“I thought the first half we lacked the intensity we needed to really impose ourselves on the game,” he said. “We let them feel like they could play with us, and in the second half we took over and started to flex our muscles a little bit.”

Part of what keeps the Bobcats off their game is Leonard Cole Field itself. Because it is a grass football field, it is more narrow than other soccer stadiums in the state, which partially explains why MHS has only scored one goal at home compared to 20 on the road.

“You hate to say anything about the field because we all have to play on it, but this field isn’t conducive to fit our style,” Fuchsen said. “It’s tough, the fans came out and supported us well and we have no excuses, we just failed to put the ball in the back of the net.”

The lone goals in regulation were completely different as well, as Marshalltown scored close off the foot of defender Franky Ramirez, while Ottumwa got a goal off a free kick from nearly 40-yards out by Anthony Segovia.

“I’m not sure how that found the back of the net,” Fuchsen said. “I don’t know if [goalkeeper Ricky Ibarra] wasn’t set, we were waiting and one of the assistants said the referee didn’t actually blow his whistle to restart the play, but it’s one of those things where the guy with the whistle is in command you have to take the highs and the lows of what you get and battle through whatever is given to you.”

There were chances late in the game and overtime as well for the Bobcats with Torres specifically having quite a few looks at the net but just not putting the ball through.

After a tough loss like that it’s good to take a step back and analyze what went wrong, but Marshalltown isn’t afforded that luxury as it is back in action tonight against Urbandale.

“It’s too bad we have to turn around and play a top-quality team in Urbandale tomorrow, it’s tough on these guys,” Fuchsen said. “Muscles get fatigued, but they are young and there’s nothing you can do about it. We will lick our wounds and be ready to battle tomorrow.”

The game between the Bobcats and J-Hawks is set for a 6 p.m. first kick tonight at Leonard Cole Field.