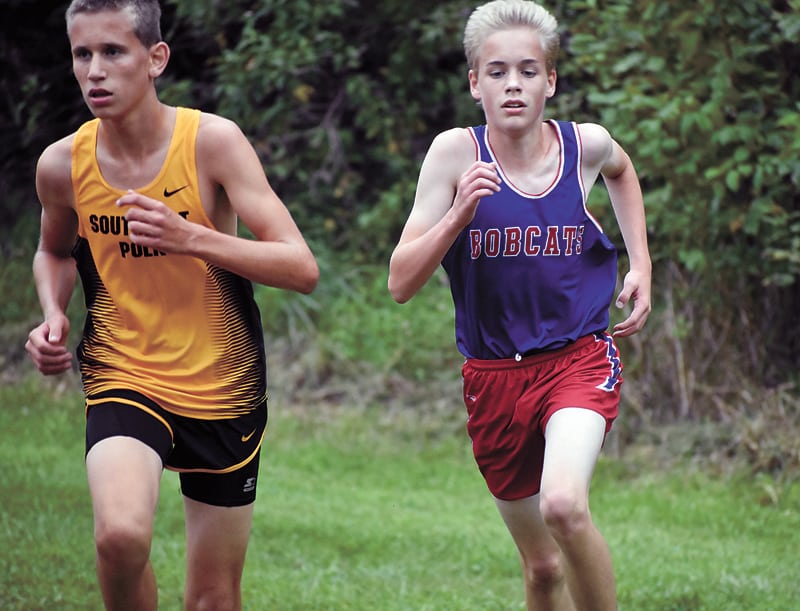 T-R PHOTO BY THORN COMPTON - Marshalltown freshman Conner Smith, right, runs alongside a competitor from Southeast Polk during the Marshalltown Early Bird Invitational at the Marshalltown Community College course on Thursday. Smith paced the Bobcats on the day, placing 15th in his first varsity meet.

Sometimes an athlete comes in and totally changes a team’s prospects of a season, and Conner Smith might be that kind of athlete for the Marshalltown boys cross country team.

Smith led all Bobcat runners the entire way on Thursday in the Marshalltown Early Bird Invitational at the course at Marshalltown Community College, eventually placing 15th with a time of 18 minutes, 57 seconds.

Last season only one MHS harrier placed in the top 20 and ran a sub-19 time at the Early Bird, and that was then-senior Luke Pedersen, who is now running in college at Bethel University in St. Paul.

“There’s some good competition with Southeast Polk and Urbandale and Ottumwa, so I’m pretty happy to see him compete,” Marshalltown head coach Chad Pietig said of his speedy freshman. “To see him finish in the top 15, he competed and competed hard. He went and did his job.”

This was the first time Smith has dealt with everything that comes with a varsity race, including the warm-ups and the waiting until the very last race of the night, and he said there were some challenges when it came to the preparation. 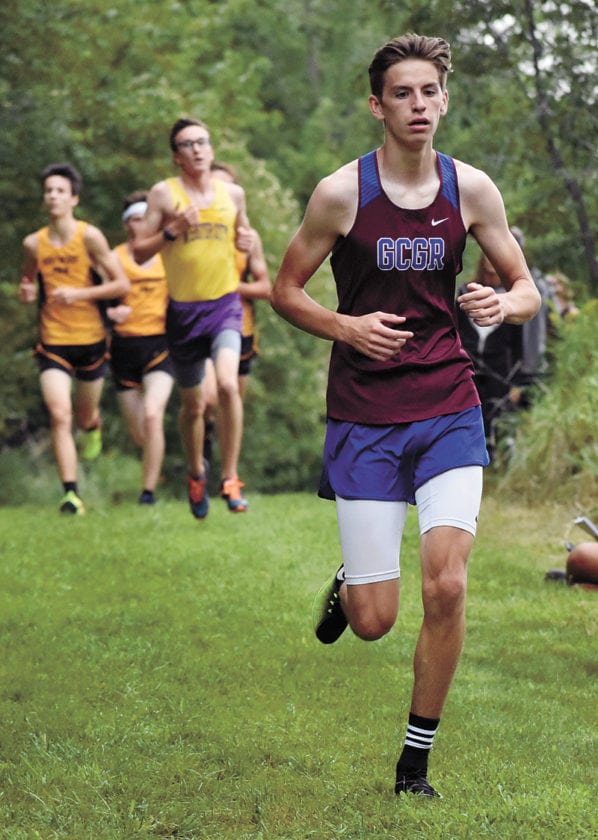 T-R PHOTO BY THORN COMPTON - Grundy Center/Gladbrook-Reinbeck senior Derek Ciddio leads a pack of runners through a downhill portion of the Marshalltown Early Bird Invitational on Thursday. Ciddio finished fifth in the race.

“I was a little bit nervous coming into this race, I just wanted to do the best I could,” he said.

Luckily since this was a meet on his home course, Smith said he knew how to attack the race and once he got going he felt great.

“We practice on this course quite a bit, so I was kind of used to it,” he said. “I think I did a great job for my first race. I want to improve though.”

Smith wasn’t the only young Bobcat to show some prowess on Thursday night, as sophomore Eli Thiessen placed 25th — four spots higher than his placing last year — with a time of 19:16. Junior Zach Bitker was next, coming in 31st with a 19:37, and freshman Marcus Barker was hot on Bitker’s heels, placing 32nd also with a 19:37. 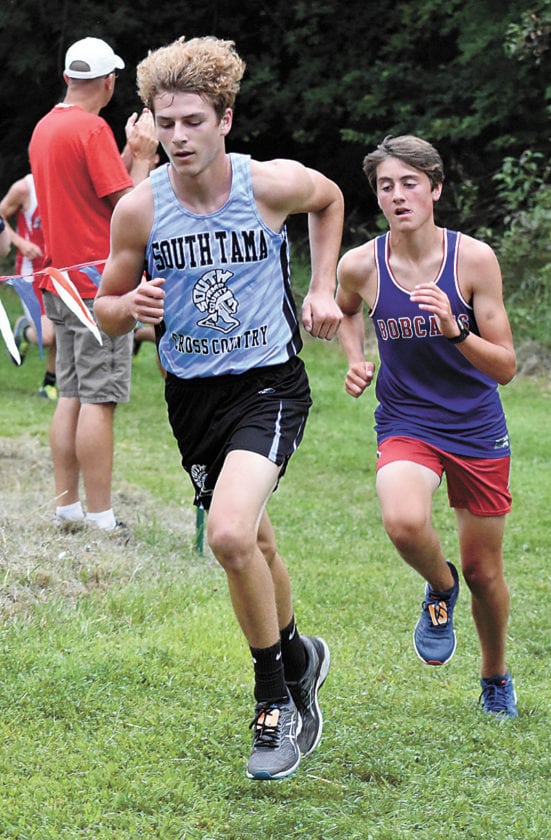 Bitker, Ross and Hermanson all shaved off at least 30 seconds from their time run in this meet last season, with Ross knocking off nearly two minutes from 2017.

As a team Marshalltown took off almost 40 points, coming in with a 138 to place sixth compared to last season’s 176, and Pietig said his guys did a great job of executing their plan.

“The one thing you can always take care of is competing,” he said. “It doesn’t matter what shape you are in, if there’s someone around you, you go after them and try to beat that guy, and that’s what I wanted to see from them tonight. On varsity and junior varsity tonight I think we got that accomplished.”

Even with all the improvement and good times by newcomers, Pietig said there is definitely more room to grow, and he even pinpointed exactly where the guys can get better.

“On the second mile some of our guys might have mentally relaxed a little too much,” he said. “That’s freshmen and sophomores though, and that’s experience they don’t have yet in trusting their training. Looking at our splits, that’s where most of us can make a big improvement between now and the next time we come here.” 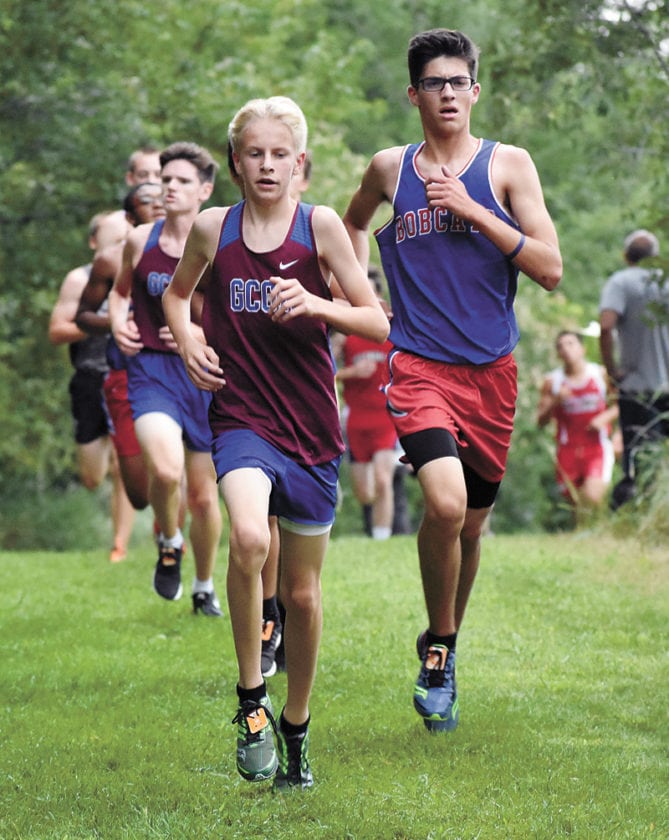 It won’t be long until the Bobcats will be back at home, as they host the 45th annual Bobcat Classic in two weeks. That will be the second of four times Marshalltown will run at the MCC course, including the CIML Iowa conference meet and Class 4A District meet later in the year, and Pietig said having so many chances to run on their home course will give his guys an opportunity to see their improvement.

Grundy Center/Gladbrook-Reinbeck senior Derek Ciddio wasted no time starting his season off with a bang on Thursday, as he scorched the MCC course to place fifth with a time of 18:13.

Ciddio already beat his time at the Iowa High School State Cross Country meet from last season, where he ran an 18:19 at Lakeside Municipal Golf Course in Fort Dodge, and new Spartan head coach Jackson Anderson said Ciddio is ahead of where he was at the end of last season.

“He has worked hard, his spring track season was good and he worked hard this summer so I think it’s kind of coming together,” Anderson said. “It’s early in the season but I think it is a good indicator of where he wants to go and what his goals are. He shows he’s going to be a strong leader for this team.”

Ciddio is a senior leader on a team filled with underclassmen. Sophomore Kenny Day was the next-best finisher for GC/G-R, coming in 21st with a time of 19:07, while freshmen Paul Brockett and Soren Cleveland finished 27th and 38th respectively.

“I think that says a lot about what those guys are going to do as they figure out how a high school race differs from junior high competition,” Anderson said. “It’s a different level they are going to have to work at, but they are going to continue to get better and I think you’ll see them run closer together as we progress through the season. That top four is going to be tight and competitive as we move forward.”

Grundy Center finished in fifth as a team with a score of 136, two points ahead of the host Bobcats.

Though Garrett Arp is a junior at South Tama County, this is his first year competing for the Trojan cross country team.

The way he handles the course wouldn’t suggest that, however, as Arp already has a top-20 finish after coming in 18th at the Marshalltown Early Bird with a time of 18:59.

STC head coach Robert Tyynissmaa said cross country might not be Arp’s first love as a sport, but he’s got a future on the course if he keeps competing like he did on Thursday.

“He’s a wrestler and his heart is in wrestling, but I think he’s figured out that cross country can help him out with that,” Tyynissmaa said.

Behind Arp was a few other fresh faces for Trojan cross country, as freshman Trusten Rosenberger placed 42nd with a 20:17 and freshmen Logan Arp and Clayton Graff took 44th and 57th respectively.

“We’ve got some things kicking on our middle school program that will feed right into us as freshmen, so a couple of years who knows?” he pondered.

This is the first of two meets the Trojans will have at the MCC course in the first two weeks of the season, since they will be back for the 45th annual Bobcat Classic on Sept. 6. Tyynissmaa said that provides his team a good benchmark to see how much they’ve improved in the first few weeks of the year.

“We like to come back in that two week period so we can compare apples to apples,” he said. “It does well for the kids to see that so they can look at their time and say, ‘well look at how much time I cut off.’ Some of them will cut off big chunks of time and that helps them with their confidence moving forward.”