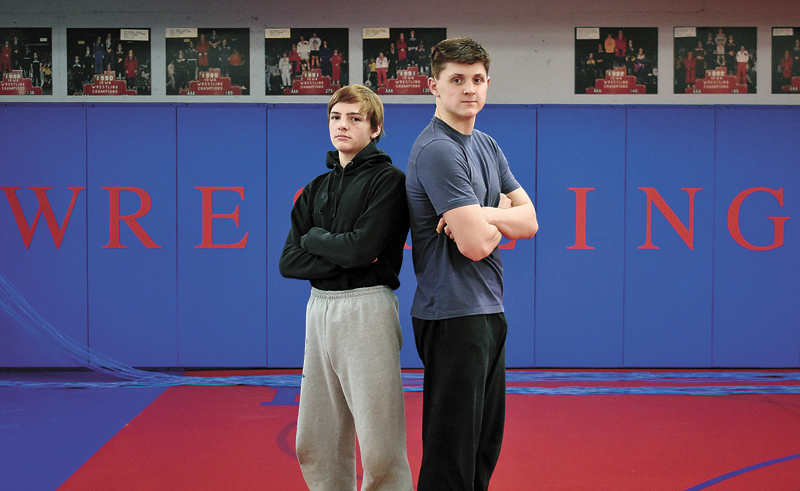 T-R PHOTO BY THORN COMPTON - Marshalltown wrestlers Bennett Hageman, left, and Austin Close, right, pose in the new MHS wrestling room before practice on Monday. Hageman and Close will both make their debut at the Iowa High School State Wrestling Tournament at Wells Fargo Arena in Des Moines on Thursday.

Two new faces will be wearing the name ‘Marshalltown’ across their chests at the Iowa High School State Wrestling Tournament at Wells Fargo Arena this season.

Bobcat junior Bennett Hageman at 120 pounds and freshman Austin Close will both make their debut on the biggest stage in the state on Thursday, and MHS head wrestling coach Mike Mann said that’s an exciting prospect.

“It’s always good to have new, fresh guys go,” Mann said during practice Monday. “Underclassman junior and an underclassman freshman, it’s always great to go down there as an underclassman to get some experience and you hope you build on it and come back the next year and even do better.”

While the two boys are separated by a couple of years and 60 pounds, Mann said both Close and Hageman possess the coveted ‘it’ factor.

“Usually it’s something that is just in a person. As a coach you go down the check list of why is somebody what they are,” Mann said. “Do they work hard? Are they talented? Are they strong, are they fast, are they mentally strong in a match while facing adversity? We’ve seen guys that are excellent in the practice room and they take all kinds of shots, and they get in the meet and don’t even take a shot. When I say ‘it factor,’ they just find a way to get it done. Sometimes you just don’t teach that, kids just naturally have that mentality.”

Close (19-14) earned his first state qualification by winning his district meet with two pins, something that he said still hasn’t really set in.

“I’m still getting over the fact that I won districts, it’s just mind-boggling,” Close said.

It’s truly a rare feat for a freshman to not just make the state meet at a weight class like 182, let alone win his district. Of the 48 total qualifiers across all three classes at 182, he is one of two freshmen, along with Griffin Gammell from Waukee, who is also a Class 3A qualifier.

Close is also one of two freshmen in 3A qualified in any weight class above 160, with Gammell again being the other one, and he is the only freshman to win his district at 182 this year, regardless of class.

“I am super proud that and I’m constantly reminded of it,” he said. “Of course I’m not expected to win the whole thing right off but I’m definitely going to try to learn what I can from it and see what I can get from it. Especially just watching and feeling the aura of state.”

Mann said Close should be proud of what he’s done.

“Any kid ought to have a great amount of confidence accomplishing what he did this year,” Mann said. “It’s kind of up to him how he wants to take this and move forward. He appears that he wouldn’t be a kid that takes it as pressure, just as an opportunity.”

One of the reasons Close has been presented with the opportunity before him, he said, is because of the experiences he’s gained in his first year wrestling at the high school level in the CIML Iowa Conference, one of the toughest conferences in the state.

“Coach always reminds us that we went through the gauntlet this year with Southeast Polk, Valley, all those high-ranked teams with multiple ranked kids there,” he said. “I think that definitely prepared me for districts and hopefully future state tournaments.”

Though he is young in age, Mann said Close shows maturity beyond his years and a grasp of the fundamentals of successful wrestling.

“Us coaches get all hyped up about all these super fancy moves and technique, but he just controls his tie-ups, doesn’t do anything to get himself into trouble and always makes sure he is scoring in the right positions,” Mann said. “He just basically is very fundamentally sound, and that makes a big difference.”

Close will have to have his fundamentals down in his first matchup of the tournament though, as he is pitted against Brett Mower from Glenwood. Mower, who is ranked No. 3 at 182 in 3A by The Predicament, owns a 43-2 record, with his only losses coming to wrestlers from outside the state.

Mower was also a state qualifier at 160 a year ago, and Close said he knows what kind of a task is in front of him.

“I’m gonna have to fight that kid, he looks pretty good record-wise, but of course that could mean nothing,” Close said. “We will just have to wait and see, hopefully I do well but if not I will come back the second match of that day and I’ll give it my all.”

What Mann said should be an advantage for Close is his ability to fight back when he’s down.

“He’s just a guy who capitalizes on other people’s mistakes,” Mann said. “I don’t know if I’ve seen somebody as good as him fight off of their back, because there have been several times this year where I thought for sure he was not going to get off his back but got off his back and actually came back and pinned those guys. He’s just got what it takes to get it done when he needs to get it done.”

Hageman (20-12) has also shown an ability to fight back throughout the season. Of his 12 losses, only two have been by extra points, and he’s only been pinned once.

Mann said Hageman possesses the ability to shrug off when negative things happen, and he doesn’t get too excited for positive things.

“He has a calming attitude, he never gets excited one way or the other. He works hard, he’s very disciplined and he knows what he needs to do,” Mann said. “Just to put things in perspective, here he is and he’s never qualified for state before, he comes off the mat after winning a wrestleback and he still doesn’t smile.”

While it might not show on his stoic face, Hageman said he is excited to make his state debut.

“It feels good, this was one of the goals I set for myself at the beginning of the year and it feels good to accomplish that,” he said.

Last season Hageman was fourth in his district at 106, which meant he was just two wins away from a state trip, and he said that’s been in the back of his mind all season.

“Throughout the year that’s been a motivation for me,” he said.

While Hageman hasn’t wrestled at Wells Fargo Arena yet, he is carrying on a recent legacy from his brother, Reese, who was a two-time state qualifier at 138 as a junior in 2016 and 152 as a senior in 2017.

“It was cool watching him wrestle and being able to do what he did is also cool,” Bennett said.

Mann said it’s good that Hageman has his brother to lean on for advice, but it’s also a completely different feel when you step onto the mat at state yourself.

“He’s been down there and he’s watched his brother, he can pull on that experience but it’s still going to be different when it’s ‘me’, and you’re actually in your singlet in the tunnel, getting ready to go,” Mann said.

As for some advice he’s received from his brother, Bennett said Reese has given him a few words of encouragement.

Bennett will start his tournament with a familiar foe in Nick Miller from Waukee. Miller (31-8) beat Bennett in their first meeting on December 13 by a 7-1 decision, and Miller finished third at 113 in the state meet a season ago.

Though Bennett fell to Miller the first time around, he said a lot has changed in the past two months.

“I feel like I’ve been a lot better on my feet the past couple of months,” he said. “I just have to fight in every position, don’t give anything up easily.”

Mann said it’s actually not a bad position for Bennett to be in, facing someone who he has lost to.

“It probably takes more pressure off of you if the kid has beat you before, you can just relax and go instead of trying to defend something and go 2-0 on a kid,” he said.

The other advantage Hageman has, Mann said, is that he is used to fighting in close matches.

“A lot of times you don’t want to take big risks and try to score points that might get you in jeopardy, but as long as you can keep it close it only takes one mental lapse or an error and a takedown or whatever a kid is thinking,” he said. “There’s always an opportunity to stay in the match when it’s close.”

Both Bobcats have tough roads ahead of them in competitive brackets, but both have shown an ability to achieve more than is expected of them. Hageman said this will be valuable experience heading into his senior year, but that doesn’t mean he isn’t looking for success this season.

“Whether it’s this year or next year one of my goals is to finish on the podium,” he said. “I have to wrestle all six minutes, wrestle well on my feet, get to my shots and finish.”

With three years remaining in his high school career after this season, Close said for him it’s not do or die getting on the podium, his goals aren’t as lofty.

“I want to make it to Friday, that’s one of the big things I am trying to get to,” he said. “Win at least one match on Thursday and I’ll be good.”

Mann said both boys have what it takes to finish with a medal on Saturday, and that should be what they are aiming for.

“You don’t go down there not to place,” Mann said. “There are a few kids that go down there and say, ‘hey, I set a goal to qualify and I met my goal,’ well now it’s time to re-evaluate your goals and go from there.”

The Iowa High School State Wrestling Tournament will get underway on Thursday at Wells Fargo Arena in Des Moines, with Marshalltown and the rest of the 3A field starting at 9 a.m.

9 a.m.-noon — Class 3A first round and first-round consolations

6-9 p.m. — Class 2A first round and first-round consolations