Garza on a tear for surging Hawkeyes 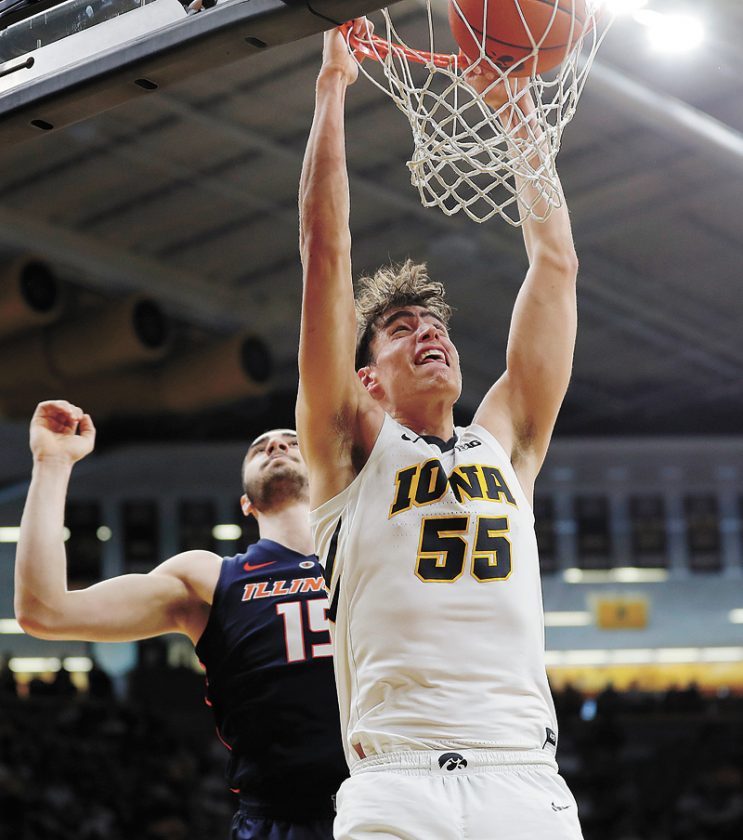 AP FILE PHOTO - Iowa forward Luka Garza (55) gets past Illinois forward Giorgi Bezhanishvili (15) for a dunk during the second half of their Big Ten Conference basketball game Jan. 20 at Carver-Hawkeye Arena in Iowa City.

IOWA CITY — Iowa sophomore Luka Garza started this season in recovery after a nine-pound benign cyst was removed from his abdomen.

He might end it as one of the best players in the Big Ten.

The 6-foot-11 Garza has been on a tear of late, carrying the 20th-ranked Hawkeyes like he never has before.

Garza, who also battled a sprained ankle in early January, has averaged 21.2 points over his last five games. Garza shot 60 percent from the floor during that stretch, one that has persuaded the Hawkeyes to feed him in the post more than ever. Iowa (17-5, 6-5 Big Ten) travels to Indiana (13-9, 4-7) on Thursday in search of its seventh win in nine games.

“Well, he’s healthy. That’s pretty much all it is,” Iowa coach Fran McCaffery said. “He’s doing what he’s capable of doing. He’s really worked hard to get to this point. He really put the time in this summer.”

Garza had a promising freshman season where he averaged 12.1 points and 6.4 rebounds while pairing a unique blend of old-school post moves with a strong jumper. The persistent pain that Garza felt during workouts upon arriving back on campus prompted a visit to the doctor, where a CAT scan revealed the cyst, which was attached to his spleen. Surgery could have put his season in jeopardy, but Garza was back in the starting lineup by opening night in early November.

Garza posted back-to-back 20-point games in November, but then he shot just 1 of 10 in a loss at Michigan State and scored only four points in a win over Iowa State. The ankle injury had him on the bench during a loss to Purdue.

Since Garza returned to the lineup, he has been almost unstoppable on offense while serving as Iowa’s “stretch five” — a center whose ability to hit a jumper helps the frontcourt-focused Hawkeyes stretch the floor.

“I think I’m just playing with a lot of confidence,” Garza said. “My teammates are finding me in my spots and I’m going out there and playing as hard as I can, being able to convert some shots.”

Garza is shooting 55.3 percent from the floor and 34 percent on 3-pointers, which is good enough to bring defenders out. His biggest improvement has been at the free-throw line, where he is shooting 84.9 percent — an improvement of nearly 15 points from his freshman year. Garza is averaging 15.1 points per game overall, and his percentage on free throws is the fourth-highest in the Big Ten.

“He will make a nine-footer while he’s getting banged off the glass in traffic look like a layup. That’s really hard to do,” McCaffery said. “Then he’ll step out and make a three, then make a 12-foot jumper, an 18-foot jumper, a 23-foot jumper, a shot fake one dribble pull-up. He has the total package when it comes to scoring the ball.”

Perhaps the most encouraging sign for Garza and the Hawkeyes is that his recent strong play has coincided with Iowa’s recent decision to run more plays through him than they ever have.

Garza has taken at least 12 shots in each of his last five games, and he has made at least eight of them in every one of them.

“He’s got two or three moves that you really can’t bother or block,” Iowa forward Ryan Kriener said. “When he shoots his jump shot, he shoots it kind of straight up, not out like most people do, so that makes it really hard to bother. He’s a really crafty player.”