Trojans are best of the West 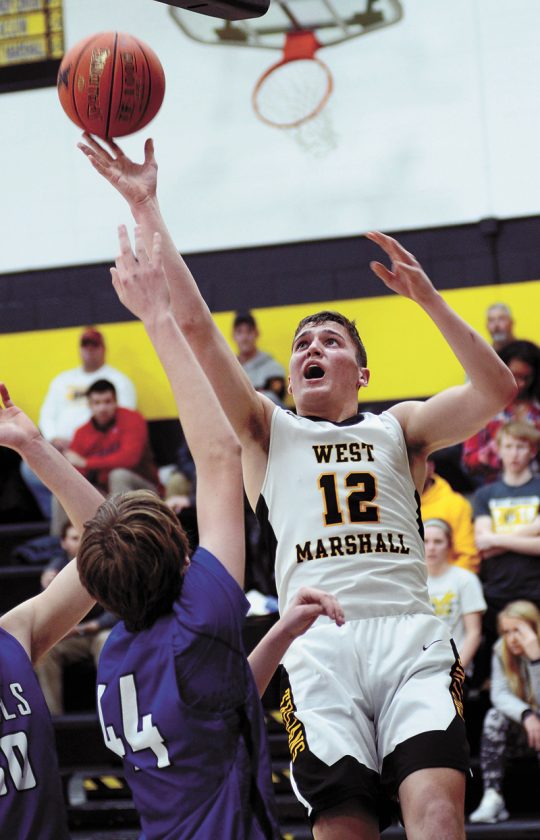 STATE CENTER — The West Marshall boys’ basketball team won or shared the NICL West Division championship in each of its first five seasons in the league, but hadn’t finished in first place since sharing the top honor with Gladbrook-Reinbeck six years ago.

On Wednesday night, the Trojans let the Rebels share in the occasion in a different way.

West Marshall turned back Gladbrook-Reinbeck 66-54 in the oft-postponed final NICL West game for both teams, giving the Trojans the outright divisional crown for the first time since 2012.

Senior point guard Cameron Bannister scored a career-high 24 points while Joe Halverson and Peyton Pope added 16 points apiece to lead the Trojans past the Rebels to clinch the title.

“I think it means a lot to everyone,” said Bannister. “We’ve played with each other our whole lives, so making it up to this means everything. I think it’s a great accomplishment.” 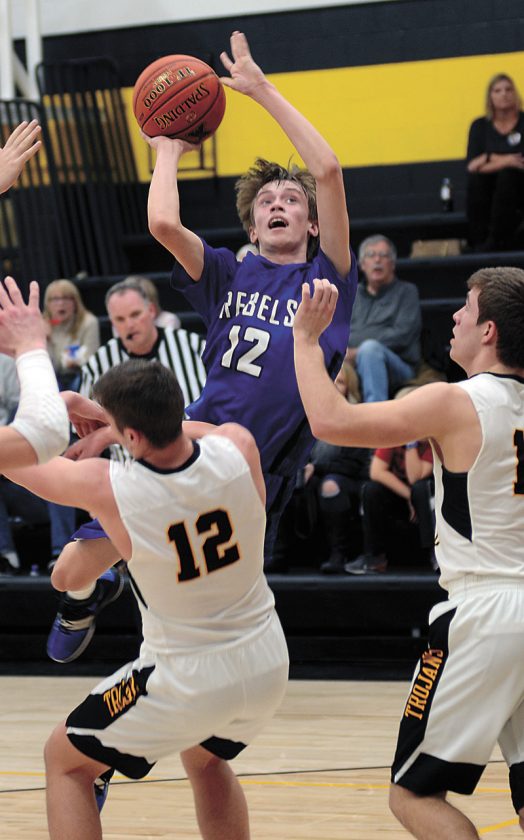 Keeping it in perspective, however, was Monday’s one-point loss to Meskwaki Settlement and tonight’s regular-season finale at home against Dike-New Hartford, the ninth-ranked team in Class 2A and the top-seeded squad in West Marshall’s district bracket.

The Trojans’ subdued celebration showed where the conference championship fit into the bigger picture.

“It is a big deal, but we have to look toward the postseason. It’s something good to have and you can never take it away from us.”

West Marshall (13-6, 10-2) becomes the first two-loss champion in the NICL West since before the Trojans transfered over from the Heart of Iowa Activities Conference in 2008-09. Gladbrook-Reinbeck (12-6, 8-4), which won five-straight titles starting with the throne it shared with West Marshall in 2012-13, wasn’t able to offer as much as resistance as Rebel Nation had hoped. 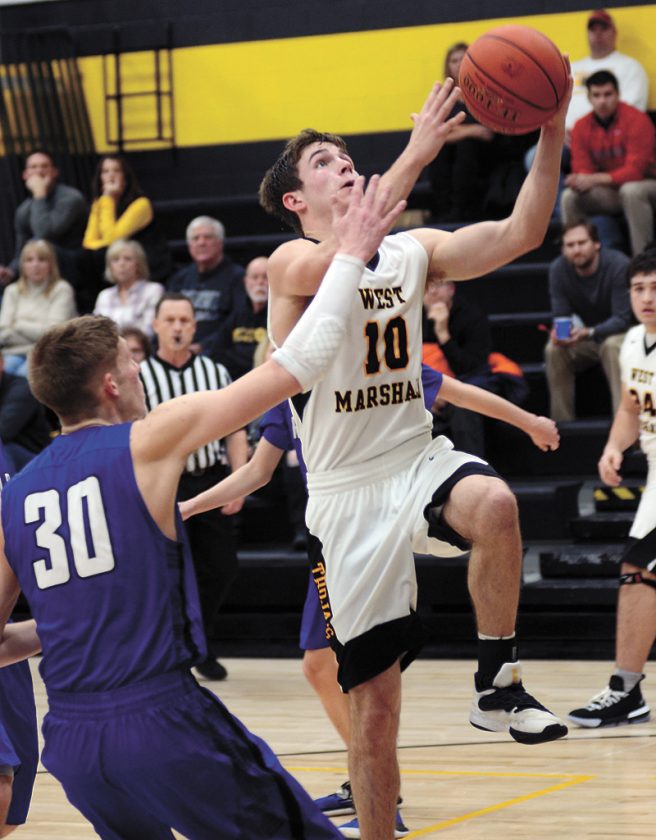 Instead of a three-headed scoring threat, the Rebels’ potent pair of Jackson Kiburis and Dylan Riffey kept the game as close as they could without a third option to defer to. Kiburis scored a career-high 31 points and Riffey finished with 21, but the rest of the Gladbrook-Reinbeck roster managed only two points as the Rebels suffered back-to-back losses for just the second time this season.

“We were hoping they would look to score more and probably take a shot they wouldn’t necessarily take,” G-R head coach Scott Kiburis said of Jackson and Riffey. “Our team has been really unselfish on offense lately, so we needed them to shoot more than they normally would.”

The Rebels came out firing, with Riffey and Jackson combining for three 3-pointers in the first quarter and G-R leading 9-2 before the host Trojans stormed back. West Marshall scored the last eight points of the opening period, including seven of them by Bannister, before taking the lead for good in the latter stages of the first half.

Halverson converted an uncontested layup on an inbounds play to break a 21-all tie, Josh Larsen scored three points in a row and Pope’s 3-pointer with 5 seconds left before halftime opened up a 29-21 lead for the Trojans.

Gladbrook-Reinbeck never got closer than five points the rest of the way as West Marshall managed to keep pace offensively in spite of some free-throw shooting woes down the stretch. 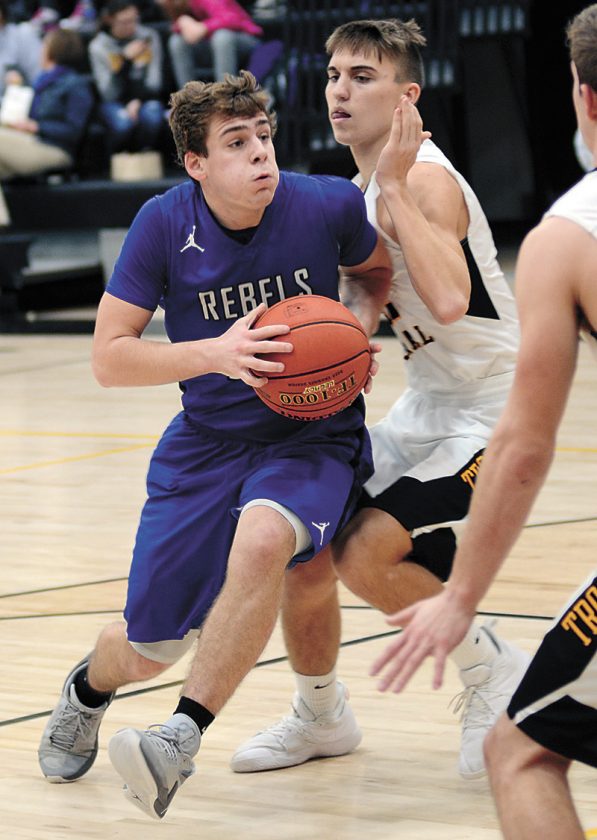 Inside the final two minutes, the Trojans went 4-for-10 at the charity stripe to give G-R a glimmer of hope of getting back into the game. The Rebels needed a victory to get themselves a share of the league crown, but instead they went the final 4:37 without a field goal and sustained their fourth league loss.

Bannister, in addition to a career-high scoring night, led West Marshall with seven rebounds and five assists. Halverson added six rebounds while Gabe Jones contributed six points and six rebounds, including offensive rebounds on a trio of missed free throws for the Trojans in the fourth quarter alone.

“It means a lot, they’ve been fighting for this for the last couple of years to get back on top of the conference,” said West Marshall head coach Paul de Neui. “It’s a special moment for these guys. That’s why I put Seth Diser in there at the end, he’s a part of this group and he’s been there for the whole trip.”

The Trojans’ regular season ends at home tonight against Dike-New Hartford, while Gladbrook-Reinbeck’s four-game road swing to end the schedule continues with Friday’s trip to Meskwaki Settlement and Monday’s game at 1A No. 2 Montezuma.

T-R PHOTO BY THORN COMPTON – Marshalltown Community College freshman Myles Broadie, right, splits Graceland defenders Robert Nieves, left, and Myles Smith, behind, for a shot during the first half of the Tigers’ 111-57 beat down of the Yellowjackets on Wednesday. Broadie had eight points off the bench for MCC in the win.