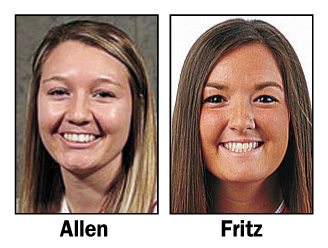 CEDAR RAPIDS — Central College senior pitcher Mariah Fritz was one of three players to share the American Rivers Conference’s Pitcher of the Year award after helping the Dutch win the 13th conference title in school history.

Fritz, an East Marshall High School graduate, finished the conference season with a 12-3 record in the circle for Central, accounting for all 12 of the team’s wins in ARC action while posting a 3.62 earned run average.

It’s the first all-conference honor for Fritz, who began her career at Coe College before transferring to Central prior to her sophomore campaign.

Simpson College catcher Ashley Allen was named to the all-ARC second team for the second time in her career. Also an East Marshall graduate, Allen was second-team all-conference as a sophomore and honorable mention selection last spring.

Allen batted .286 in league play with four doubles, three home runs and five RBIs. Overall she finished with a .245 batting average, eight doubles, four homers and 10 RBIs while posting a .975 fielding percentage. She also threw out 12 would-be basestealers from behind the plate for the Storm.