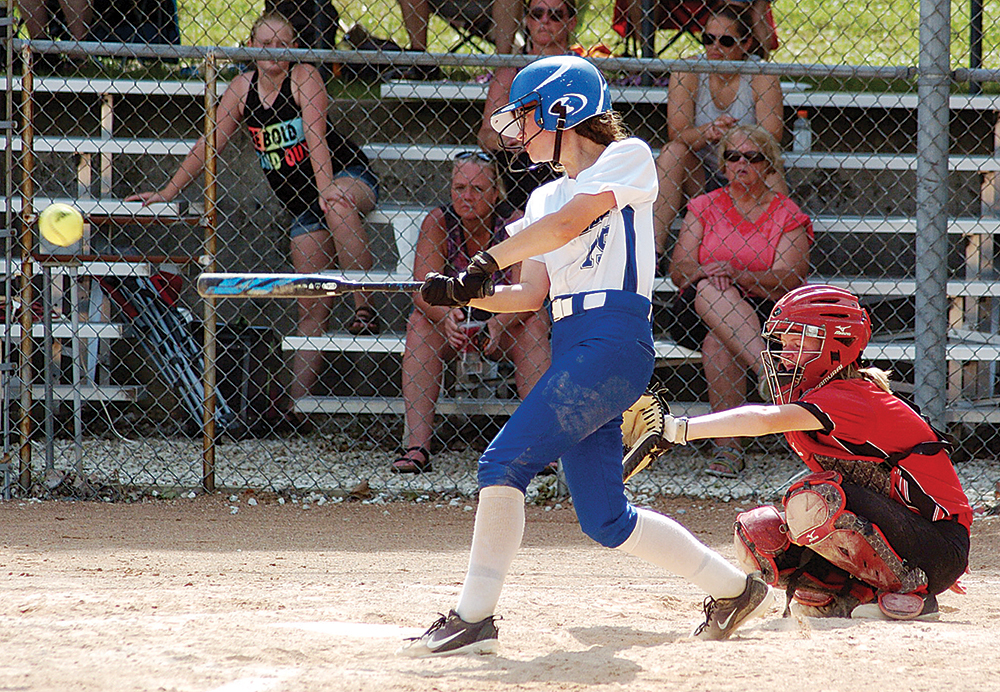 T-R PHOTO BY ROSS THEDE - Gladbrook-Reinbeck junior Hannah Quackenbush hammers a two-run double down the left-field line against Aplington-Parkersburg in the final game of Saturday’s three-team round robin in Gladbrook.

GLADBROOK — Whether or not his Rebels are in fact the best two-win team in the state, Gladbrook-Reinbeck head softball coach Collin Arndt wants his players to believe they are.

Three days after snapping a 37-game NICL West Division losing streak with a 7-5 win over South Hardin, the Rebels (2-15) were back on their home diamond for a three-team round-robin on Saturday.

Neither Belmond-Klemme nor Aplington-Parkersburg cared much about what the Rebels had done earlier in the week — like leading Class 1A No. 5 BCLUW and 2A No. 9 East Marshall by two runs in the early going of their NICL West contests on the road — and both beat G-R handily. The Broncos (10-11) opened the day with a 12-1, six-inning win over Gladbrook-Reinbeck and the Falcons (6-15) finished off the Rebels 9-2.

“We’ve definitely played our best softball this week,” Arndt said. “I think it’s coming together at the best time, too. Like I tell our girls, I think we’re the most dangerous two-win team in the state. I think we can get it rolling a bit for the postseason.”

Arndt said the most important facet of his team’s play that has elevated lately is its attitude.

“We’ve had a lot better leadership this last week too. The seniors have been helping out the younger girls and it’s shown.”

Arndt wasn’t as enthused about those same aspects of his team’s performance on Saturday, as Belmond-Klemme came away with 10 unearned runs against the Rebels.

Starting pitcher Rachel Cooley allowed five hits and seven runs — one earned — over 3 2/3 innings for the loss, walking three while striking out one. Alyssa Morgan went the final 2 1/3 frames in the circle, surrendering six hits and five runs — one earned — with one walk and one strikeout.

The Rebels had just four hits to show for their first game of the day, including a double for Haleigh Berendes. Jada Schlampp singled and scored G-R’s only run in the sixth. Taylor Gienger and Emily Else added singles.

Aplington-Parkersburg was clinging to a 4-0 lead before scoring five times in the top of the sixth inning to make it a 9-0 game.

Gladbrook-Reinbeck got a bulk of its seven hits in the seventh inning, starting with pinch-hit singles for Karlie Rickert, Brianna Strohbehn and Paige Creswell to load the bases. Hannah Quackenbush came through with a two-run double to left, but the Rebels’ rally ended there.

The Rebels welcome non-conference foes Colo-NESCO (8-17) and Nashua-Plainfield (9-12) to Gladbrook on Monday and Friday, respectively, before opening Class 1A regional play on July 8 at Don Bosco.