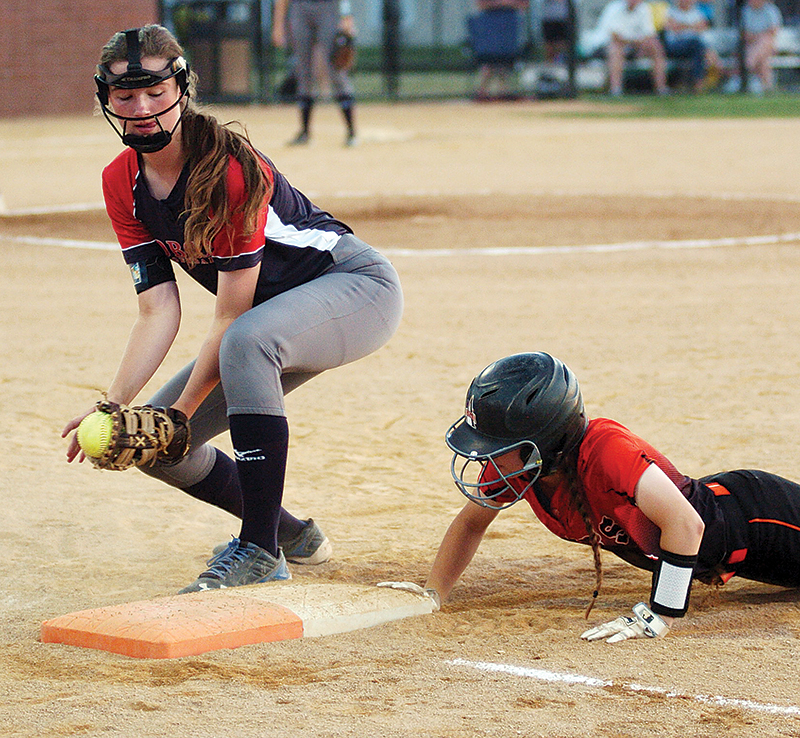 AMES — The strategy seemed sound enough, but the execution lacked and the opponent wouldn’t comply. When Marshalltown head softball coach Jim Palmer made a pitching change four pitches into the first inning, the Bobcats were playing to the matchups.

The gameplan backfired on the Bobcats, and in a big way. Too big for Marshalltown to overcome.

Ames sluggers Karlie Hill and Jewels Buss hit back-to-back home runs in the bottom of the first inning and the Little Cyclones (11-21) expanded upon that early advantage, eliminating the Bobcats from Class 5A Region 8 play with a 7-0 victory on Thursday night.

MHS freshman starting pitcher Avery Mull got the first Ames hitter out before surrendering a single and a double, totaling four pitches before Palmer called on sophomore left-hander Kailee Pollard to face the heart of the Little Cyclones’ order. 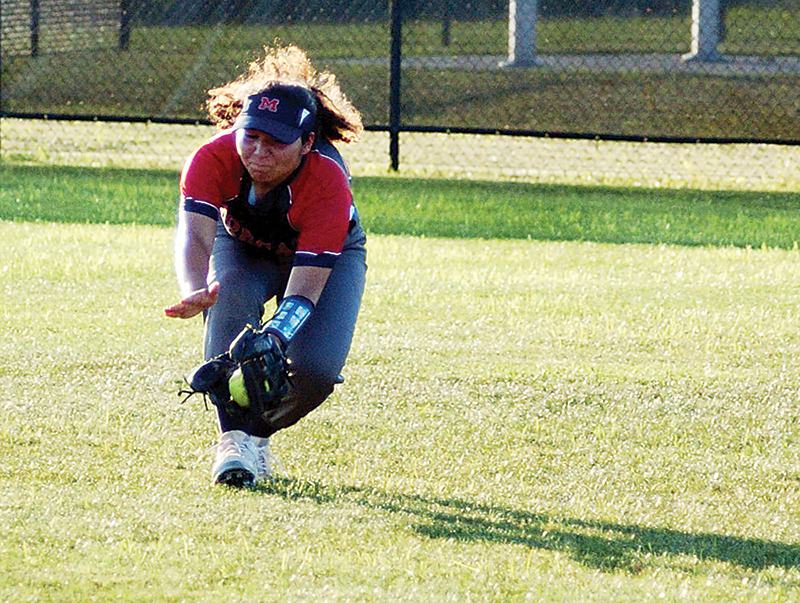 T-R PHOTO BY ROSS THEDE - Marshalltown senior right fielder Marina Rosalez makes a running catch of a line drive off the bat of Ames’ Ireland Buss to end the third inning of Thursday’s Class 5A Region 8 game in Ames.

Pollard gave up a three-run home run to Hill and a solo shot to Buss before Palmer went back to Mull. Ames tacked on three more runs against Mull, including another home run by Hill, before eighth-grader Ella Grife got her turn in the circle.

By that time it was too late for a Marshalltown team averaging just 3.2 runs per game to dig itself out of a 4-0 deficit, let alone the seven-run margin.

“The game is full of failures and probably what hurt us the most is we ended up having 11 strikeouts,” said Palmer. “We just didn’t put enough balls into play, and when we did put a ball in play we hit it right at their players.”

Buss totaled 11 strikeouts, allowed only one Marshalltown single, walked one and hit a batter in her complete-game performance that matched her first meeting with the Bobcats this season. On June 4, Buss spun a two- or three-hitter, depending which team’s statistician you ask, walked three and struck out nine in a 10-0, five-inning Little Cyclone victory on the same diamond.

Buss also homered against Pollard in that game, too. 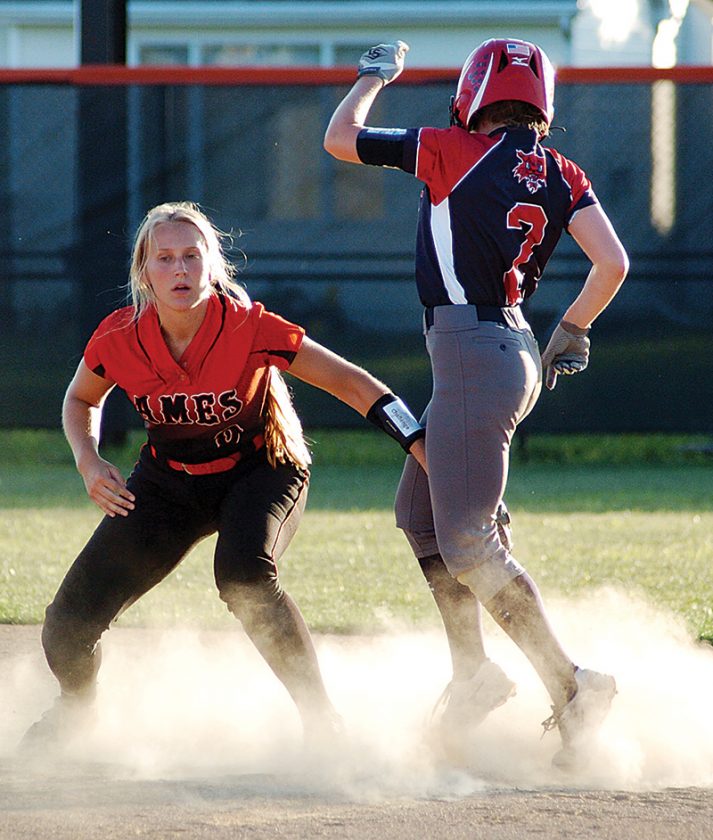 T-R PHOTO BY ROSS THEDE - Marshalltown senior Alyvia Chadderdon, right, pops up from her slide with a stolen base as Ames shortstop Isabelle Rogers makes the tag during fourth inning of Thursday’s game in Ames.

“I think the girls were probably a little shocked by [the pitching change] but there was also a reason why I did that,” Palmer said. “When you look at some stats, Kailee pitched that first game (against Ames) when we lost 9-6, so when those batters were coming up, she had great success against those batters so that’s why I made that switch, especially with two runners in scoring position.

“Give Karlie some credit, she’s been known to hit some great balls this year and we just left a ball up in the zone a little too much.”

Mull settled in for her final stretch of 3 2/3 innings, allowing only two more hits and three more runs. She struck out the side in the bottom of the third, but the defense’s near-perfect performance became irrelevant by the time the Bobcat offense was completely silenced for the 13th time this summer.

Buss walked Erica Johnson, the second batter of the game, but stranded her at second base after a Madi Finch sacrifice bunt by striking out the next six Marshalltown hitters she faced.

Not until Sophie Younkin slapped a single off the first baseman’s glove down the right-field line with two outs in the fourth did the Bobcats get their only hit. Senior Alyvia Chadderdon replaced Younkin, her designated hitter, and stole second base successfully before Buss recorded yet another strikeout. 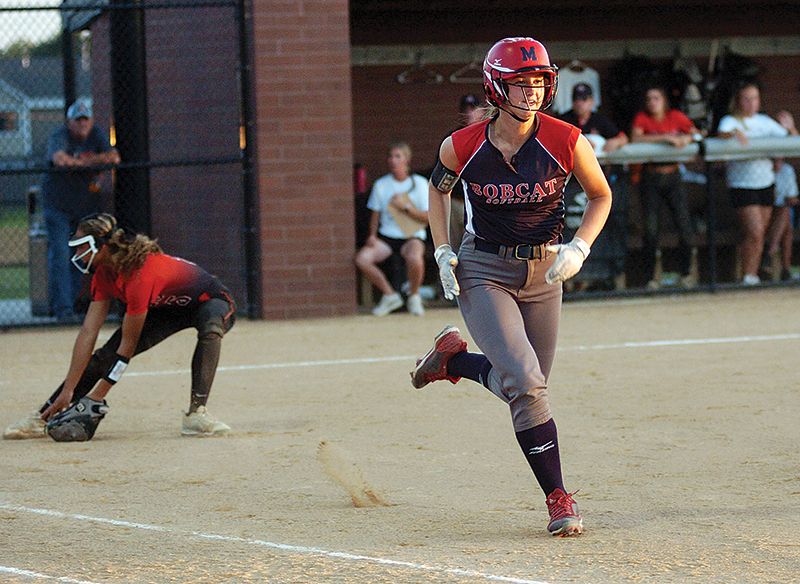 Mull was the only other Bobcat batter to reach base, getting hit by a pitch one out into the fifth inning. Her courtesy runner Maggie Augustine was thrown out on a delayed steal to end the at-bat, and Buss finished off the shutout with two more perfect innings.

“They kept their spirit and they kept their fight and that’s one thing I can attest to,” Palmer said. “They didn’t quit. They tried.”

Grife gave up a pair of singles during her two innings in relief but was the only one of three Bobcat pitchers to keep Ames from touching home plate. She recorded three strikeouts.

“Ella Grife is going to be a wonderful pitcher for us in the future,” said Palmer. “She throws hard and has a really great riseball. She’s just young, so it’s going to take some time.

“I’ll probably go back and say ‘should I have started her?’ because she really shut them down the last two innings.” 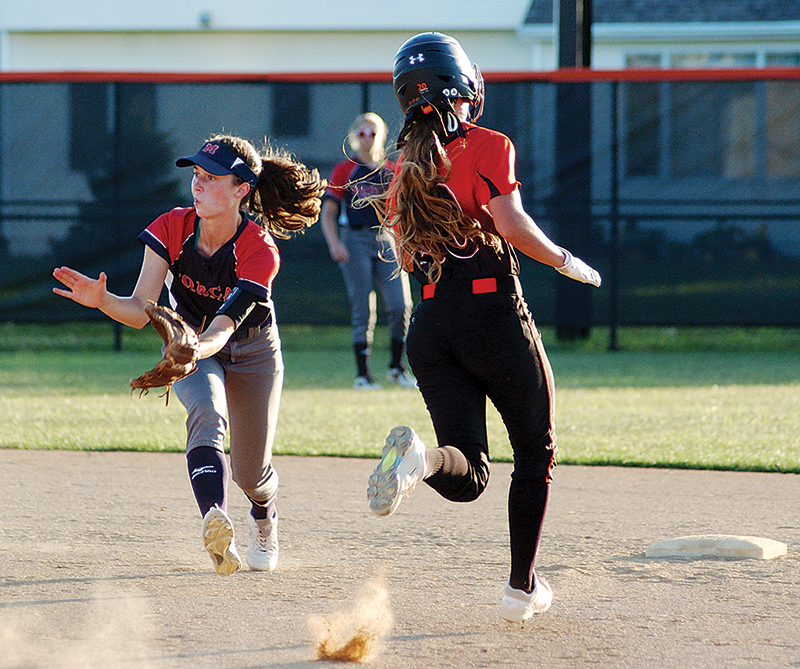 Marshalltown’s sometimes-shaky defense made just one error behind its pitching triumvirate, but it didn’t come back to bite the Bobcats. Ames’ big hitters did.

Hill finished 2-for-4 with two home runs and four RBIs, while Buss was 2-for-2 with a homer, a single, a walk and two stolen bases. Lindsey Mescher added two hits, including a double, while Hope McLean’s lone hit was an RBI triple in the fourth.

The Cyclones advance to face No. 5 Johnston (32-8) on Saturday at Johnston Middle School in the Region 8 semifinals. No. 10 Pleasant Valley and No. 15 Bettendorf meet on the other side of the bracket.

The Bobcats, meanwhile, finished with 29 losses or more for the sixth-straight year. They haven’t won a playoff game since 2013.

Rosalez finished the season with a .253 batting average and one of the squad’s five home runs. Last year in 26 games, Rosalez hit .158 with one RBI.

“I definitely think this year was a big change, everything was drastic,” said Rosalez, who will attend Central College in the fall and play softball. “I saw everybody get better, it was one of the best years I’ve had in my softball career. I wish I could have done more but I can only do so much. I’m definitely thankful for coach Palmer and every single one of my teammates.”

Rosalez said she and her teammates were positive about their first-round draw with Ames, even though the Little Cyclones swept the Bobcats 9-6 and 10-0 in their regular-season meeting more than a month ago.

“I definitely think there’s always a fair chance of beating any opponent whether anybody thinks so or not,” she said. “There’s always a chance, you just have to take the high ground and step up.”

The Bobcats were unable to do that on this night, but a vast majority of the roster will return for next year in hopes of advancing the program beyond single-digit victories.

“I think we were hitting the ball better this year, and with some more time and hitting the ball in the offseason, I think we’re going to see something even better next year,” said Palmer. “The future’s bright, we’re young. I’m looking forward to the future.

T-R PHOTO BY ROSS THEDE – Marshalltown senior right fielder Marina Rosalez makes a running catch of a line drive off the bat of Ames’ Ireland Buss to end the third inning of Thursday’s Class 5A Region 8 game in Ames.

T-R PHOTO BY ROSS THEDE – Marshalltown senior Alyvia Chadderdon, right, pops up from her slide with a stolen base as Ames shortstop Isabelle Rogers makes the tag during fourth inning of Thursday’s game in Ames. 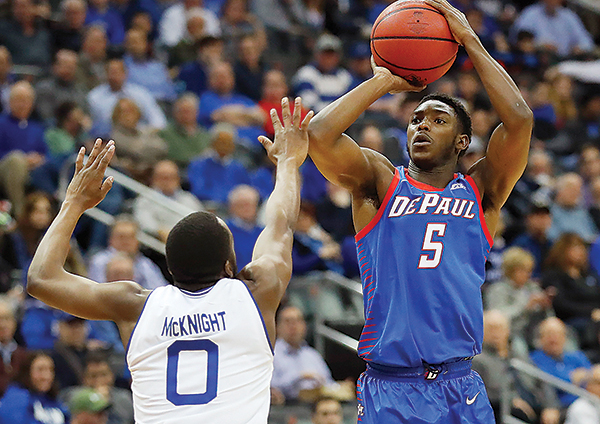 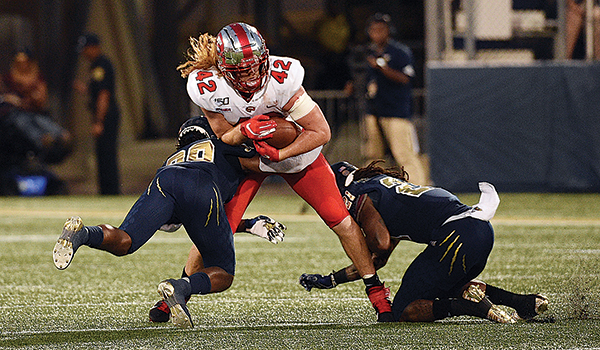