T-R PHOTO BY Emily Barske – East Marshall senior Melinda Puumala has had her fair share of injuries as a four-year four-sport athlete. The Mustang softball team has won 14 straight.

T-R PHOTO BY ROSS THEDE – Melinda Puumala swings at one of East Marshall’s recent softball games. The brace on her left knee is from a partial PCL tear. 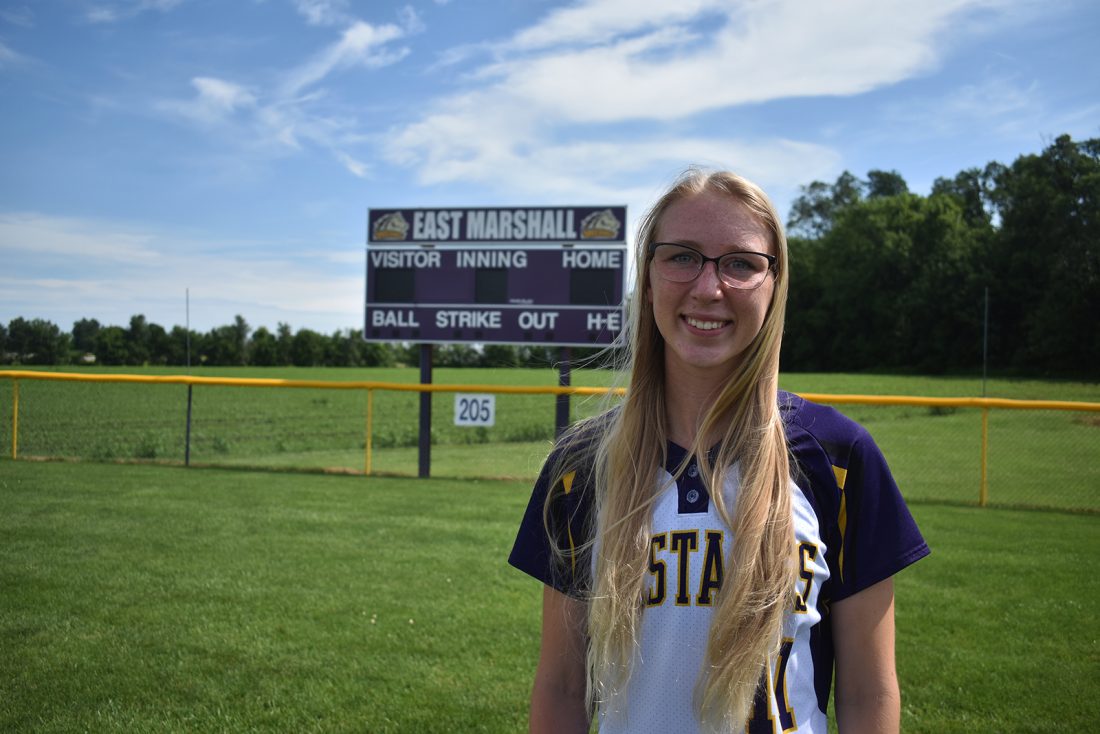 T-R PHOTO BY Emily Barske - East Marshall senior Melinda Puumala has had her fair share of injuries as a four-year four-sport athlete. The Mustang softball team has won 14 straight.

As Melinda Puumala geared up for the 400-meter hurdles at the Drake Relays, she was nervous. She had a big bruise on her good knee from hitting three hurdles the day before in the 100 hurdles. Her nerves were so bad she was struggling to get her sweatpants off over her cleats when her heat was called up.

The jitters still didn’t subside as she prepared. Everyone seemed to be in their zone, but she was a ball of anxiety, worrying she’d hit a hurdle again. She talked to the girl in the lane next to her, she doesn’t remember her name or what school she was from, who told her to calm down and run her race.

And when Melinda stepped into the blocks it became just another race.

Except it wasn’t just another race. The senior had qualified for the Drake Relays, which hadn’t happened at East Marshall in a long time. It was enough of an accomplishment just to be there. But enough has never been enough for Melinda.

Her dad, Dale Puumala, was taking photos of the race and was watching at the final curve. As she rounded the corner, he thought “wow she’s looking pretty good.” 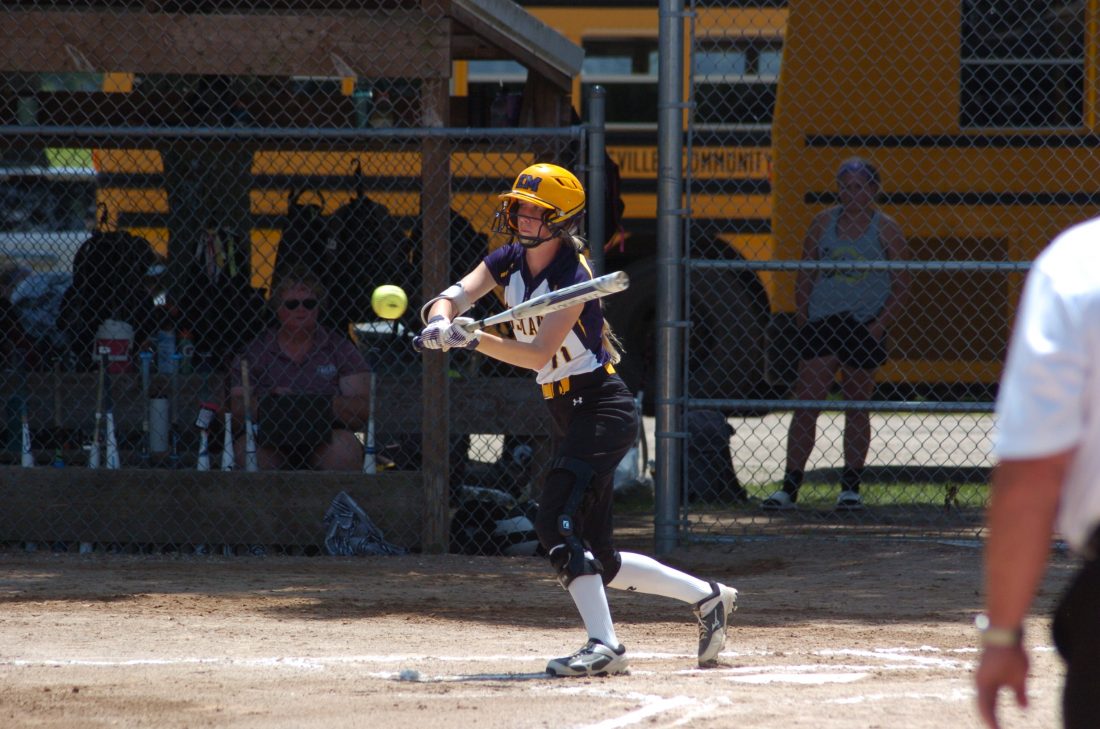 T-R PHOTO BY ROSS THEDE - Melinda Puumala swings at one of East Marshall’s recent softball games. The brace on her left knee is from a partial PCL tear.

When she finished the race, she heard the announcer say her name. She’d won her heat.

Melinda Puumala is an athlete. She’s got endurance. She’s got speed. She’s got competitive nature. And quite possibly the most necessary trait — she’s got grit. Without it she may never have made it through four years as a four-sport athlete at East Marshall, let alone one season.

Melinda hasn’t been through an entire season without pain in her high school career. Her knees have been the source of injury the majority of the time. Although her mom, Linda Puumala, said it was also quite memorable when she broke her nose after doing a cartwheel before the district cross country meet her junior year. And in Melinda’s words, she’s “allergic to the earth,” so trouble breathing has also been a problem. 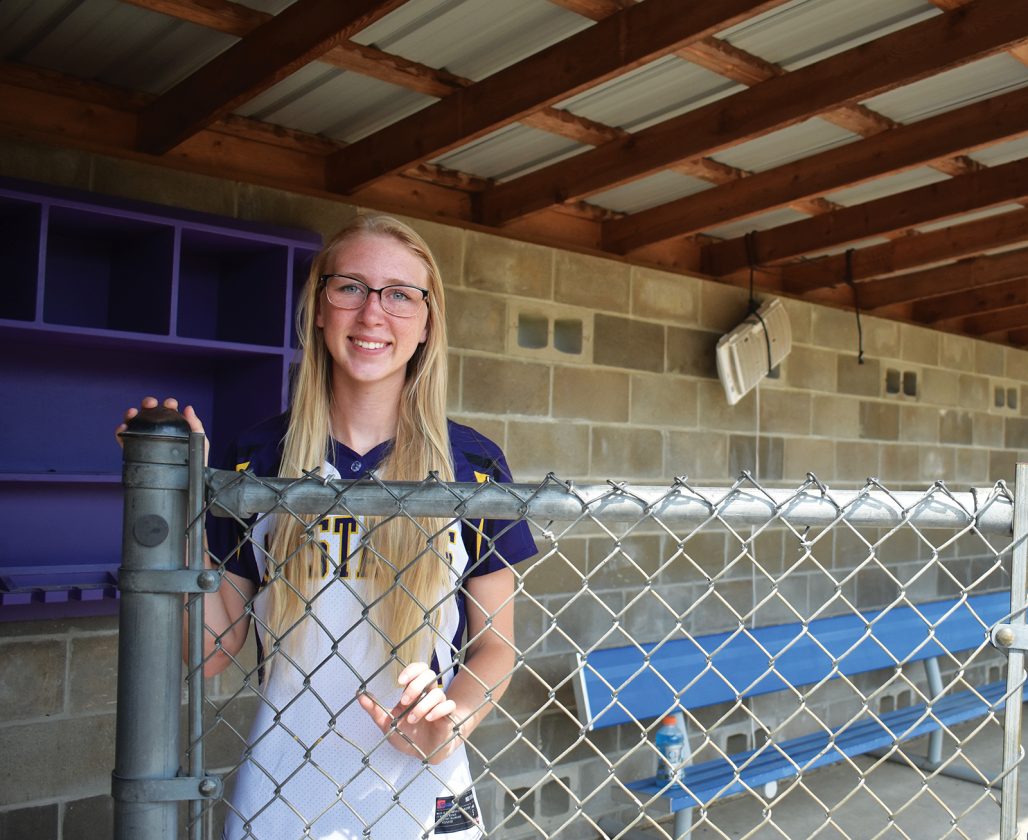 But none of it has kept her from sports.

“She’s very stubborn. She’s very highly, highly competitive. And she’s going to give her 100 percent whenever she can,” Linda said.

Running cross country and track in addition to playing basketball and softball, Melinda’s athleticism has always been versatile. Her knee issues started in middle school and became apparent her freshman year. Linda remembers seeing her crying in pain during races. The only way the pain would subside was if she stopped running.

On her first visit, they found she had a fat pad impingement in her knee. After a mutual decision with the doctor, something the Puumalas enjoyed about the care at the clinic, Melinda was to receive a cortisone shot in her knee. They told her it would hurt like the dickens. So she put a hooded sweatshirt in her mouth and geared up for the pain. 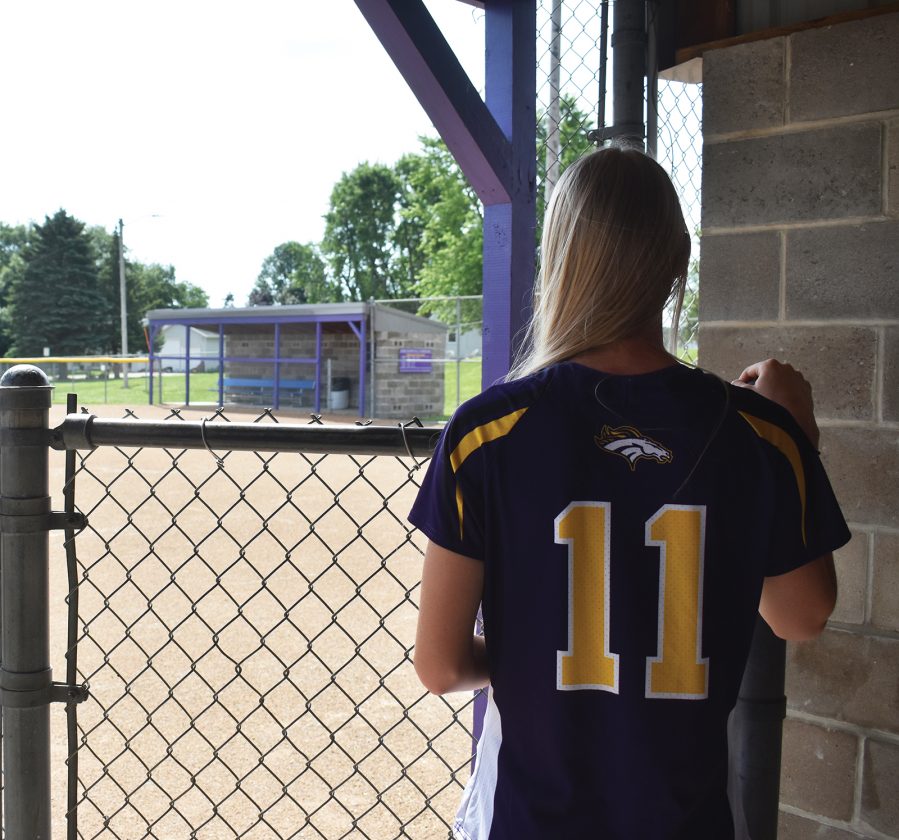 Name a knee injury and Melinda’s probably dealt with it. The injuries haven’t necessarily been consistent. She’s had problems with her right knee and her left knee, off and on throughout the seasons. She’s gone through various treatments and rounds of physical therapy. Most recently, she partially tore her PCL in her left knee during a softball game.

She’s known for stealing bases. East Marshall coach Jary Hoskey said “she’s the gas that runs the engine.” Playing against Grundy Center, she took a hard slide. Everyone thought that’s when the injury may have happened, but Melinda said it wasn’t until later that she felt her knee pop.

As she fell to the ground, Hoskey came over and asked if she was OK. She went back and forth saying she was fine, but she couldn’t get up. Once she got back to the dugout, she said she could keep playing. So she did. For four more innings — even getting back on base.

After visiting local doctors and eventually ending up at the University of Iowa again, she found out it was a partial tear. That meant it would eventually heal itself and she was cleared to play. But they highly recommended she wear a brace.

Melinda said following a practice soon after, she had her teammates judge how fast she could run compared to what they remembered before the injury. They gave her an 8 out of 10.

Hoskey said she’s still as fast as most without a brace. She’s just that athletic. Knowing how good she could be at any sport, Hoskey said he’s glad she chose softball.

Her competitive nature goes beyond the playing field. Linda said in running, she knew all of her competitors across the state and what their times were. Melinda calls it scouting so she can one-up her opponents.

“She will study Quik Stats like it’s a subject in school,” Linda said.

Melinda said she loves spending time with coaches and asking how she can get better. Dale said whenever she’d go watch her brothers play sports when she was younger, she’d be right up next to the fence soaking it all in.

Needless to say, the injuries have been aggravating and annoying.

You might not know her pain if you only saw her statistics. Melinda finished her track career a two-time top-four medalist at state, and her time of 1 minute, 4.06 seconds in the 400 hurdles is a school record. Before the last couple-game slump, Melinda was batting over .500. She’s got 16 varsity letters to her name. Dale said those stats are a testament to her hardheadedness and determination.

Melinda has a lot of God-given talent, Linda said. But growing up with two older brothers who were also four-sport athletes didn’t hurt. They didn’t bend the rules or take it easy on her. She was one of them. The Puumalas have spent the last 11 years going from sporting event to sporting event nearly year round.

This season, Dale helps out with stats for the softball team and Linda heads up sack lunches and works concessions.

“When I need a rock to fall on, they’re always there,” Melinda said.

Both parents have always tried to make it to every activity and doctors appointment together. It’s been plenty to fill their schedules.

“What are we going to do after the next few weeks?” Linda said.

For a long time, Melinda has said she wanted to be the best athlete she could in high school and leave it at that. Despite having several colleges interested, mainly for running but also for softball, Melinda has wanted to end on a great career at East Marshall. But as she’s wrapped up her athletic career, she’s discovered that maybe she doesn’t want it to be done quite so soon.

Though college athletics isn’t officially off the table, Melinda knows that she needs to prioritize her education. She plans to be a nurse and wants to go to a school with a good program of study. She’s got a pro and con list written at home, but she’s not planning to rush her decision.

Even if her athletic career will truly be over in a couple weeks, Linda said what she’s learned about coming back from failure, working with others and learning to be on a team will help her forever.

“You learn more from being involved in athletics than the sport itself,” Linda said.

Now, with an East Marshall softball team that’s coming off 14-straight wins and could have a chance at a state run, she’ll be back on the field Saturday with a leg that requires a knee brace and a competitive grit that could never be injured.