CHICAGO HEIGHTS, Ill. — The No. 2 Marshalltown Community College men’s soccer team got back on track after the season’s first loss by defeating Prairie State College 6-0 on Sunday afternoon.

MCC goalkeeper Matteo Crescente needed to make just one save against the Pioneers (4-3-1), while the Tigers tallied 18 shots on goal against two Prarie State keepers.

Marshalltown CC remains on the road for its next three matches, starting with Wednesday’s contest against the Mount Mercy junior varsity in Cedar Rapids.

PELLA — The West Marshall football team snapped Class 2A No. 5 PCM’s 14-game winning streak thanks to a late touchdown in Friday’s 14-7 non-district victory over the Mustangs at Schipper Stadium on the campus of Central College.

West Marshall (1-1) went in front 7-0 on Peyton Pope’s 38-yard touchdown run in the first quarter and broke a 7-all tie with 9.7 seconds left in the game on Jarrin Goecke’s 3-yard TD plunge.

The Trojans’ game-winning march needed just 1 minute, 29 seconds to cover 58 yards in seven plays, sparked by a 31-yard pass from Pope to Brayden Evertsen that set up the game-winning score by Goecke.

Pope finished with 15 carries for 95 yards and a score, while completing 6-of-14 passes for 92 yards. Evertsen had five of those grabs for 83 yards, while he and Preston Pope both recovered a fumble to help the defense.

Gabe Jones led West Marshall with nine total tackles and Evertsen had 8.5 stops, including 3 for loss.

MOUNT VERNON — The North Tama defense delivered its second-consecutive shutout to start the season and the Class A No. 7 Redhawks blanked Lisbon 14-0 on Friday night at Van Metre Field on the campus of Cornell College.

Gabe Kopriva’s one pass completion went for a 44-yard touchdown to Tayten Payne, and Noah Weber added a 6-yard touchdown run for the Redhawks (2-0), who surrendered just 189 yards of total offense a week after holding North Mahaska to 74 in a 61-0 rout.

North Tama forced two turnovers by Lisbon (0-2) and held the Lions to 84 rushing yards. Payne recovered a fumble and Luke Pennell picked off a Gavin Wollum pass, while Skyler Staker had a team-high 10 tackles to go with two quarterback sacks to lead the defense.

Payne and Pennell both had 73 yards receiving while Staker finished 8-for-18 for 148 yards but two interceptions. Weber led the ground game with 50 yards on 14 carries. 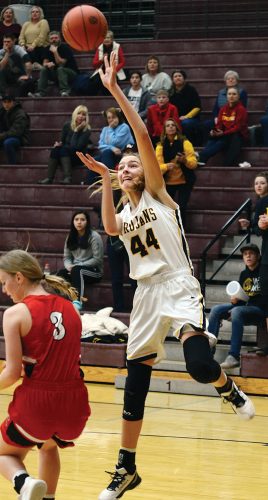