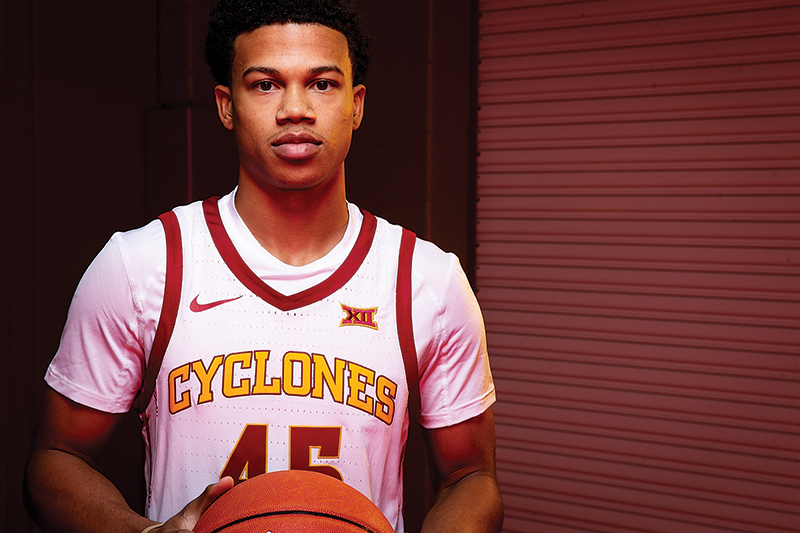 AMES — Iowa State’s hopes for competing for a Big 12 title suffered a blow when Talen Horton-Tucker decided to leave for the NBA after just one season.

The Cyclones hope they have filled that hole with guard Rasir Bolton, a Penn State transfer whose offensive numbers were similar to Horton-Tucker’s as a freshman in 2018-19.

The 6-foot-3 Bolton, a sophomore who figures to slide into Horton-Tucker’s starting spot in the backcourt, averaged 11.6 points on 38.3 percent overall shooting and 36.1 percent from deep. Bolton also led the Big Ten from the line at 87.6 percent.

The 6-foot-4 Horton-Tucker, while a much better rebounder than Bolton, averaged 11.8 points on 40.6 percent shooting. But Talen Horton-Tucker shot just 30.8 percent on 3s and 62.5 percent from the line.

“He’s a guy that, I think, can really impact our team,” Iowa State coach Steve Prohm said at the team’s annual media day. “Offensively, he’s very talented, gifted. He can score in a lot of ways.”

Bolton, 20, committed to play for the Nittany Lions after a season at Massanutten Military Academy in which he led the team to a school-record 32 wins and the No. 1 spot in the national prep school rankings.

Penn State threw Bolton right into its rotation. Bolton averaged 20 points over a five-game stretch in December, and he had a nine-game stretch scoring in double figures while coming off the bench during Big Ten play.

Bolton struggled down the stretch, bottoming out with a zero-point effort in a loss to Minnesota in the league tournament. Bolton left after the season and, after months of waiting, was granted a waiver to play right away in Ames.

“Just felt like leaving was the best decision for me and my family,” Bolton said. “It felt like a real family fit (at Iowa State). It just felt like a place for me … I felt like I could come in and help this team (and) contribute by watching coach Prohm’s playing style and how he plays his guards. That really intrigued me.”

What Bolton should give the Cyclones is a perimeter threat who can create his own shot as the shot clock winds down.

Bolton has areas he needs to improve. He had 83 turnovers against just 47 assists — ghastly numbers for a point guard — and he only shot 40.3 percent on 2s.

“Defensively, keep making strides,” Bolton said when asked about his goals for 2019-20. “Offensively, just being efficient. Cut down on turnovers, scoring the ball at a higher rate, (having) a higher field goal percentage. Just all the little things.”

One area where Bolton might help the Cyclones is on defense. Bolton was a key contributor to a Penn State team that, while finishing just 14-18, was one of the more efficient defensive teams in the country.

“It’s kind of like having another dog on the defensive side. He talks really well and gives us another communicator,” Haliburton said. “He’s one of the guys who wants to defend.”