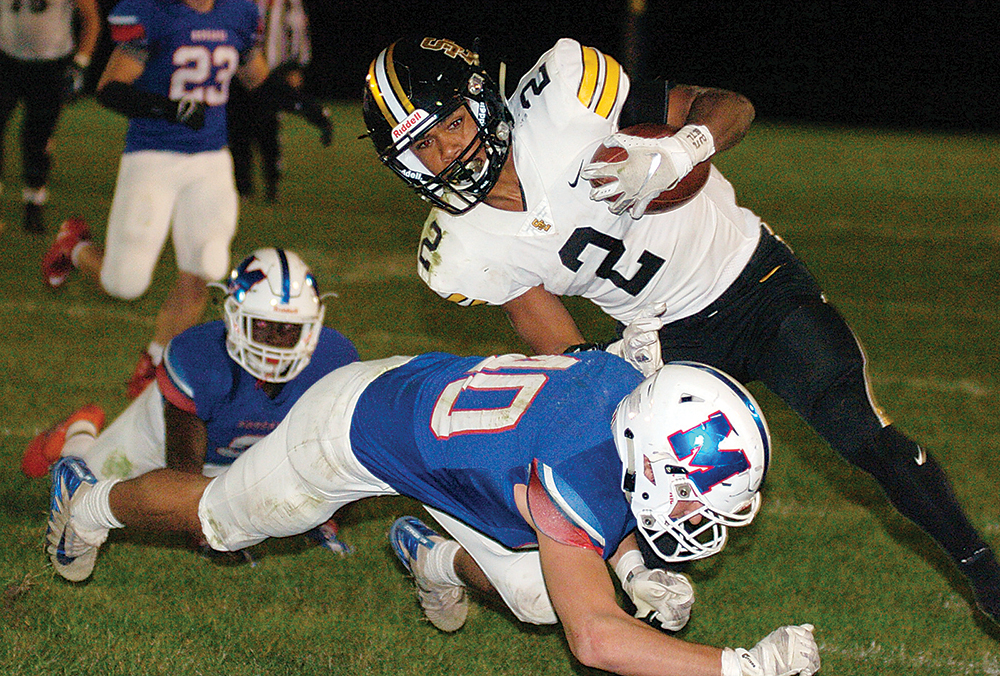 T-R PHOTO BY ROSS THEDE - Southeast Polk senior running back Deveyon Montgomery (2) is brought down by Marshalltown senior linebacker Carson Beals (40) during the second quarter of Friday’s Class 4A District 2 clash at Leonard Cole Field in Marshalltown. The seventh-ranked Rams ran away with a 49-21 victory over the host Bobcats.

The Marshalltown football team made off with a couple quick haymakers, landing itself in a 14-all tie with Southeast Polk midway through the second quarter.

The cumulative effect of every punch the Rams landed starting adding up on the Bobcats, and it quickly became too much for Marshalltown to withstand.

Deveyon Montgomery ran for 128 yards and two touchdowns, quarterback Jaxon Dailey threw three touchdown passes and Class 4A No. 7 Southeast Polk pulled away from Marshalltown for a 49-21 victory in Friday’s District 2 clash at Leonard Cole Field.

After starting the season 4-0, the Bobcats (5-3, 1-3) bowed for the third time in four district games despite matching Southeast Polk — on the scoreboard, at least — for the first 19 minutes.

Marshalltown struck first when its defense held the Rams (6-2, 3-1) to a three-and-out on their first possession, and MHS senior Justice Richardson took Logan Sunvold’s punt on a bounce, slipped through a pair of defenders, regained his balance and dashed past Southeast Polk for a 60-yard punt return touchdown. 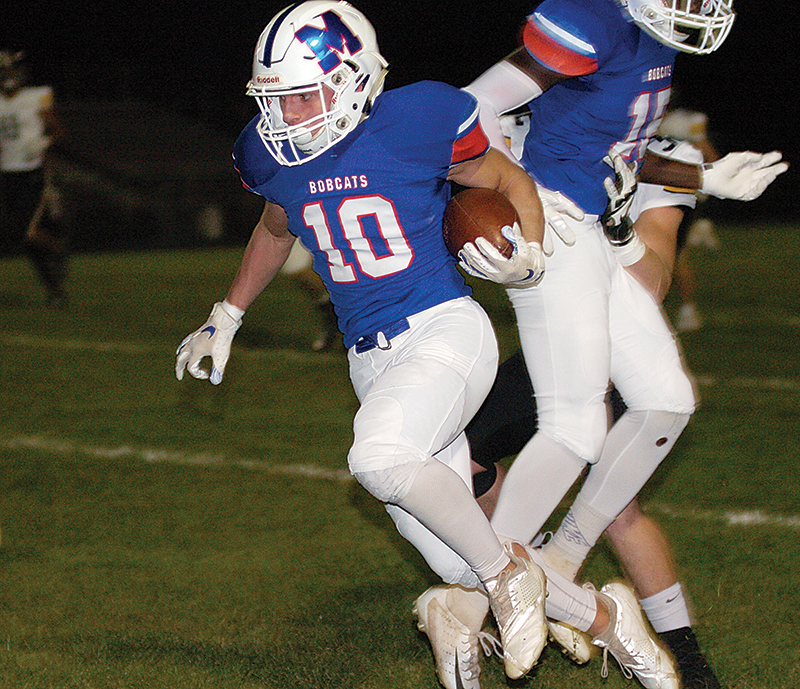 T-R PHOTO BY ROSS THEDE - Marshalltown senior Justice Richardson (10) gets help with a block by Dwight Joar, right, on his way to a 60-yard punt return for a touchdown during the first quarter of Friday’s Class 4A District 2 football game at Leonard Cole Field in Marshalltown.

Southeast Polk leaned on Montgomery during the ensuing 14-play, 74-yard drive that gobbled up 5 minutes, 29 seconds of clock and ended with Montgomery’s 6-yard touchdown plunge up the middle.

Marshalltown’s first offensive possession managed one first down before punting back to the Rams, and Southeast Polk picked up where it left off — behind its road grader of an offensive line. The Rams needed just 3:38 to go 74 yards again before Dailey connected on his first of three touchdown passes in the second quarter. Isaiah Wagner worked his way free in the back corner of the end zone for a 20-yard touchdown catch, lifting Southeast Polk to a 14-7 lead.

Neither team netted a first down on its next drives, and Marshalltown capitalized when Sunvold couldn’t field a bad snap on his punt. Gabe Wyant was there to tackle Sunvold before he could get the punt off, and the Bobcats started with the ball on the Rams’ 17-yard-line.

Three plays later, Brendan Bates connected with tight end Will Van Buren in the back of the end zone for a 15-yard scoring strike. And even though the Bobcats had just 43 yards of total offense and two first downs to that point, they were locked in a 14-all tie with Southeast Polk on the scoreboard with 6:51 left to play in the first half.

But that’s when Southeast Polk’s size up front started wearing down an exhaused Bobcat defense. The Rams went 73 yards in seven plays on their next drive, highlighted by a 50-yard touchdown catch and run by Fred Johnson that preyed on poor tackling. 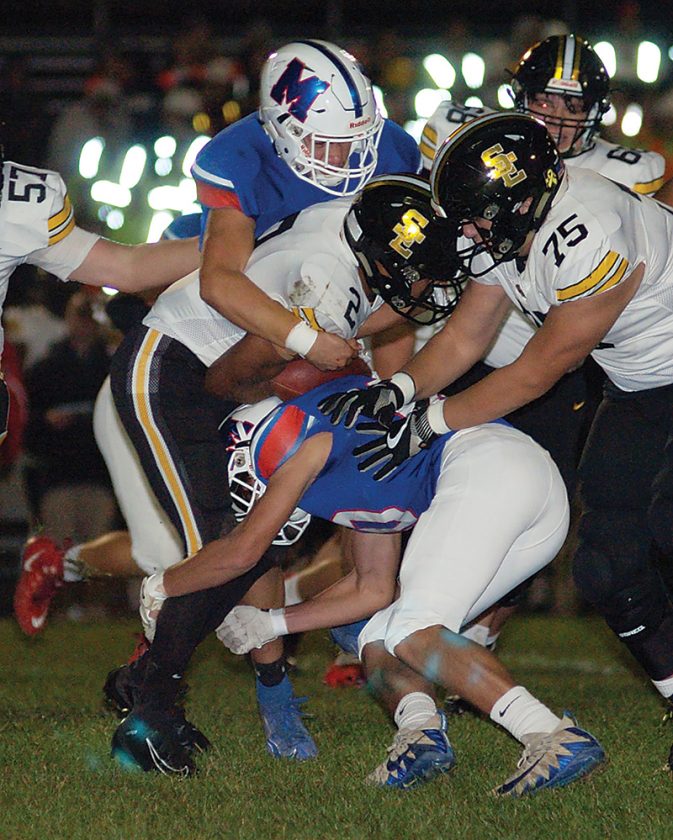 “I think our defense was out there on the field a very long time early on,” said Marshalltown head coach Adam Goodvin. “They wore our guys out and they took advantage of that.”

The Bobcats’ next three-and-out — they had five in the game — ended in blocked punt as Southeast Polk’s Brady Lyons beat his man, snuffed out Jordan Joesting’s boot, recovered the loose ball and returned it to the 1. Titus Christiansen finished off the short field for the Rams, making it 28-14 with 2:26 left in the half, and Marshalltown handed the ball back to them just 28 seconds later after three incomplete passes.

Southeast Polk swallowed the rest of the momentum with a third-straight touchdown in the final 4:35 of the second quarter, scoring on Dailey’s 5-yard bootleg pass to Wagner with 17.9 seconds remaining to bring it to 35-14 at the half.

The Rams racked up touchdowns on their fourth- and fifth-straight possessions in the third quarter to make it 49-14, and Marshalltown’s only lucrative drive came in the fourth quarter against Southeast Polk’s second string. Nick Rebik and Dominick Garth headlined a 12-play, 64-yard drive that ended with Rebik’s lunging 8-yard touchdown run.

That single possession accounted for half of Marshalltown’s offense for the game. 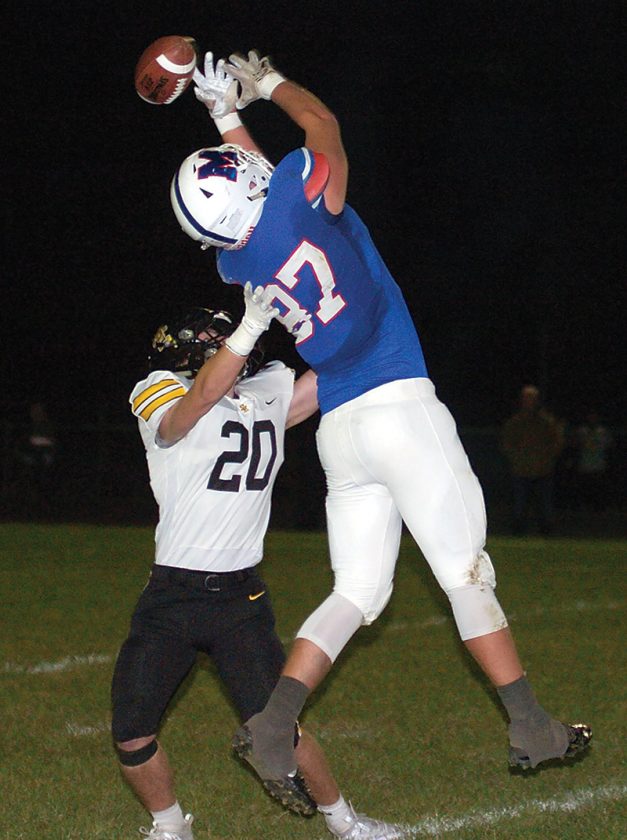 “I think it comes down to us just making plays, all 11 guys making their play and taking it one play at a time,” said Goodvin. “It’s really hard to count these guys out. I’ve never questioned their effort once this year, but the unfortunate part is that effort’s not going to win you a football game. You’ve got to execute as well, especially against a team like that.”

The Rams outgained the Bobcats 447-129, racking up 24 first downs to Marshalltown’s eight — five of which came on the final scoring drive.

Montgomery led the way for Southeast Polk with 23 carries for 128 yards and two touchdowns. Dailey ran eight times for 69 yards and was 8-for-16 passing for 139 yards.

“I think that goes to credit their playcalling,” Goodvin said of Dailey’s all-around performance. “I think he did an outstanding job of taking the load on his shoulders. We had to take [Montgomery] away because he’d kill us and we were going to try to let [Dailey] get his carries and hopefully come up and make some stops on him, and credit to him he made a lot of good runs.”

Rebik ended as Marshalltown’s leading rusher with five carries for 34 yards, while Garth had four totes for 20 yards. Both Malik Haynes and Carson Beals had 5 yards rushing for the first-team offense.

Bates ended the game 9-for-19 passing for 64 yards. Casey Linsenmeyer had two grabs for 16 yards and Van Buren one for 15, while Carson Williams was limited to two receptions for 8 yards.

Marshalltown’s last hope at climing up the 4A RPI rankings and into the playoffs remains with a Week 9 showdown at Fort Dodge (5-3, 1-3).

“We’ve got to have our most focused practice of the year next week,” Goodvin said. “We’re not going to sit here and dwell on this. It’s do-or-die next week.”

T-R PHOTO BY ROSS THEDE – Southeast Polk senior running back Deveyon Montgomery (2) is brought down by Marshalltown senior linebacker Carson Beals (40) during the second quarter of Friday’s Class 4A District 2 clash at Leonard Cole Field in Marshalltown. The seventh-ranked Rams ran away with a 49-21 victory over the host Bobcats.

T-R PHOTO BY ROSS THEDE – Marshalltown senior Justice Richardson (10) gets help with a block by Dwight Joar, right, on his way to a 60-yard punt return for a touchdown during the first quarter of Friday’s Class 4A District 2 football game at Leonard Cole Field in Marshalltown.

T-R PHOTO BY ANDREW ABADIE – West Marshall senior quarterback Caleb Keigan is sacked from behind by Benton Community defender Austin Roos during the Trojans’ loss to the Bobcats on Friday night in State Center.