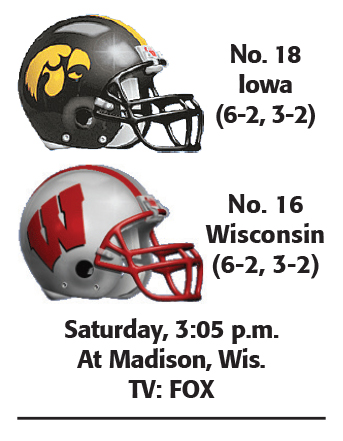 The 64-year-old coach went to a high school football game, and he and his wife, Mary, watched their son, Steve, help lead Central Michigan to its sixth win, which made the Chippewas bowl eligible.

“That was fun to be a fan and not be too emotionally invested in the game,” Ferentz said. “Although I got sucked in after a little bit, so it was good.”

Steve, a graduate assistant with Central Michigan, traveled earlier this season to Wisconsin, where the Badgers handed the Chippewas a 61-0 defeat. The elder Ferentz hopes to fair better at Camp Randall on Saturday.

“It really doesn’t matter if you look at it over five years, 10 years, 15 years,” Ferentz said. “If you look at our conference, Ohio State has led the conference in wins, and Wisconsin has been a solid No. 2 right behind them. That gives you a good level of the success they’ve had on the field, the consistency they’ve demonstrated as a football team.”

The Badgers have outscored the Hawkeyes by a combined margin of 83-40 during their current three-game winning streak in the series, but they are reeling after back-to-back road losses at Illinois and Ohio State.

GETTING BACK ON TRACK

After running for more than 100 yards in six of Wisconsin’s first seven games this season, Jonathan Taylor was held to 52 yards against Ohio State.

Taylor will face an Iowa defense that has surrendered only 10.1 points per game, the lowest average in Ferentz’s 21 seasons at Iowa. The nine touchdowns the Hawkeyes have allowed this season rank in a tie for second in the nation with Penn State behind Ohio State’s six.

Wisconsin’s defense leads the nation in total defense (223.5 yards per game) and is tied for fourth in the FBS in scoring defense (11.4 points per game).

Iowa guard Kyler Schott is expected to return from a foot injury that has had the sophomore sidelined since September. Schott started at right guard before his injury, and Ferentz said Schott could start Saturday.

“Well, he’s not in the best football shape probably; he hasn’t done anything in quite a bit,” Ferentz said. “But the good news is it’s chilly out there right now, so heat will not be a factor or humidity, and we’ll see how the week goes.”