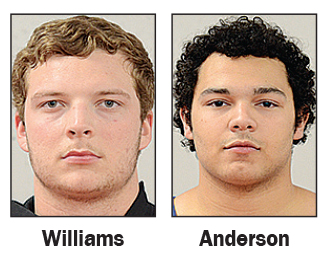 DES MOINES — The Marshalltown wrestling team sent six matmen to the Saydel Invitational on Saturday and each of them returned with at least a third-place finish.

The Bobcats crowned two champions in 220-pounder Carson Williams and heavyweight Jordan Anderson as the six-man squadron racked up enough points to place fifth overall in the 15-team tournament.

Saul Pantoja (126) and Bennett Hageman (138) both lost in their respective championship matches, while Javier Rodriguez (113) and Zach Bitker (145) both earned third place at their weights.

Williams improved to 9-2 on the season with four wins on the day, including the last two by fall. He pinned Spencer’s Logan Huckfelt in the semifinals in 4 minutes, 10 seconds, and then decked Des Moines Lincoln’s 10th-ranked Ramiro Gomez-Buentello in 5 minutes in the championship match.

Anderson (10-0) got three match victories on the day, pinning all three of his opponents on his way to the title at 285. He pinned Iowa Falls-Alden’s Kaiden Barkey in 37 seconds, Boone’s Hector Garcia in 3:23, and Pella’s Braydon Peterson in 2:40 in the finals.

Pantoja picked up two wins on his way to the 126 finals before falling by major decision to Roland-Story’s Christian Eslick, 14-1, while Hageman was edged out by ninth-ranked Leo Blawou of Des Moines Lincoln, 5-3, in the 138 title bout.

Bitker’s lone loss came in the semifinals to Class 2A No. 7 Nicholas Bockenstedt of North Polk, an 11-5 decision, before he rebounded to win the third-place match over Ryan Van Donselaar of Pella, 2-1.

Rodriguez went the same route, falling in the 113 semifinals to Pella’s Ryan Hancock by pin before beating Gentry Walston of Lynnville-Sully by major decision, 19-6, for third place.

The Bobcats totaled 124 team points and trailed West Marshall (136.5), which finished fourth in the final standings. Jake Vawter (132) and Austin Pfantz (160) represented the Trojans’ top finishers as both were runners-up.

Vawter posted two first-period pins on his way to the finals before losing a 5-3 showdown with Spencer’s TJ Arnold, while Pfantz scored a major decision and a technical fall in his bracket before being defeated 12-2 by Spencer’s Isaiah Spencer in the finals.

Spencer won the team title as the Tigers totaled 220.5 points, Des Moines Lincoln was second with 173 points, and Iowa Falls-Alden was third with 155.5.

GRINNELL — Three East Marshall/GMG wrestlers went undefeated on the day while three teams, including the Mustangs, needed a tiebreaker to decide the winner of Saturday’s Grinnell Duals.

Class 2A No. 9 Bondurant-Farrar emerged from the three-way tie as tournament champions, with East Marshall/GMG finishing second and Webster City third after each team finished 3-1 in the round-robin event.

The Mustangs were led by a trio of 4-0 performances on the day. Third-ranked Dominic Ridout went unbeaten at 120 pounds, Garrett Kerber did the same at 152, while Connor Murty was the lone EM/GMG wrestler to get four match wins.

Murty wrestled three times at 195 pounds and once at 220 and racked up three pins and one decision to lead the Mustangs. Ridout had two pins, one technical fall and received one forfeit, while Kerber had one pin, two wins by decision and also accepted one forfeit.

Webster City edged out East Marshall/GMG in the first round of the day’s duals, 39-38, before the Mustangs turned around to hammer Mount Pleasant 69-4. In the next round, EM/GMG got four pins in a 37-34 victory over Bondurant-Farrar, and the Mustangs ended the day with a 46-25 defeat of Grinnell.

In addition to the trio of unbeaten wrestlers, five Mustangs went 3-1 for the day. Dane Thompson’s lone loss at 132 was to fourth-ranked Brody Beck of Grinnell. Carson Burchland piled up three pins at 138. Samuel Bandstra (160) had a pin and a major decision among his wins, and Tayte Nauman bookended his day with pins at 182. Isrrael Vargas had a pin during his 3-1 day at heavyweight.

East Marshall/GMG is back in action Tuesday with a home triangular against Baxter and Iowa Falls-Alden.

Storm 2nd at round robin

MANLY — The South Hardin-BCLUW wrestling team took second place at the Central Springs Round Robin Tournament on Saturday, trailing only the host Panthers in the six-team meet.

Three Storm wrestlers won their respective weight classes with 5-0 records, though only one of them wrestled more than twice. Kade Pekarek picked up four match victories at 160 pounds, scoring three first-period pins as well as a major decision to lead SH-BCLUW on the day.

Class 2A No. 4 Carter Kolthoff got only one match at 106 pounds and won it, pinning Riley Sellergren of Central Springs in 1 minute, 34 seconds. Lane Hartwig went unbeaten in two matches at 113, scoring a major decision as well as a pin.

Taylor Kolthoff got the marquee match of the day as the seventh-ranked Storm 120-pounder was defeated 10-4 by 1A No. 4 Clayton McDonough of Central Springs. Kolthoff tallied a technical fall and a pin in his other matches to place second.

Justin Gethman took third place at 138 by going 1-1, and Lucas Gunderson was third at 220 with a 1-1 mark. Both won by fall and were pinned during the day.

STC fifth in own tourney

TAMA — The South Tama County wrestling team ended Saturday with three-straight dual wins to climb back to fifth place at the Trojans’ own STC Duals.

South Tama went 1-2 in pool play to end up in the consolation bracket, but the Trojans won out from there to finish in fifth. The Trojans opened the tournament with losses to Independence (62-15) and Omaha Burke (51-29) before closing pool play with a 47-21 win over Dubuque Wahlert.

Omaha Burke defeated Des Moines East in the semifinals, 46-33, and Solon in the championship match, 48-30, for the team title.