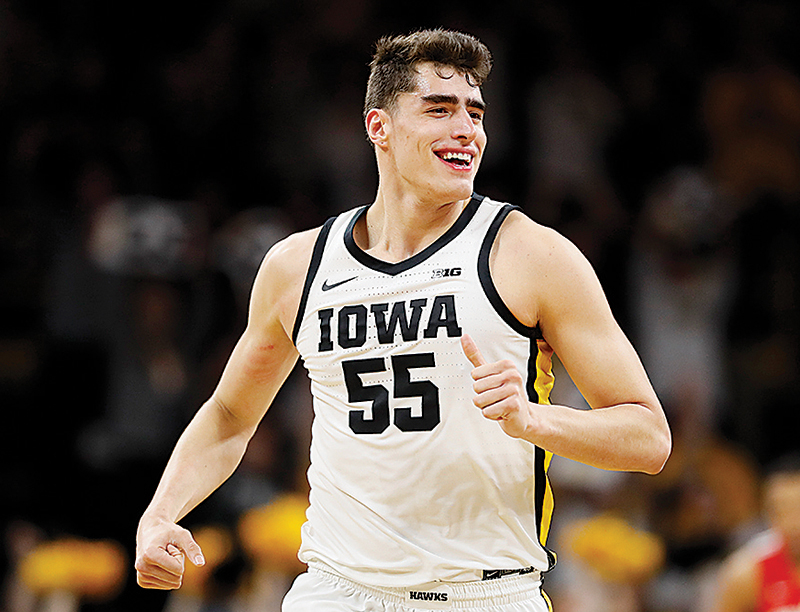 AP FILE PHOTO - University of Iowa junior center Luka Garza celebrates after making a basket during the first half of a Big Ten Conference basketball game against Ohio State on Feb. 20 in Iowa City.

University of Iowa men’s basketball player Luka Garza was named National Player of the Year by ESPN and Stadium, and to their five-member All-America first teams on Tuesday.

The ESPN and Stadium honors are the second and third media outlets in as many weeks to tab Garza as their national player of the year (Sporting News). Garza is a first-team All-American by ESPN, USA Today, CBS Sports, Sporting News and NBC Sports.

Garza’s 15 double-doubles are third most in a single-season by a Hawkeye in three decades and the most since 2002 (Reggie Evans, 18).

Garza, who would become the first Hawkeye to ever win the Naismith Trophy, finished the 20-game conference schedule averaging 26.2 points per game, becoming the first player to average at least 26 points in Big Ten play since Purdue’s Robinson in 1994 (31.1 ppg). Garza scored a school-record 740 points this season, breaking the program’s 50-year old record previously set by John Johnson in 1970. He scored 20 points or more in a school-record 16 straight Big Ten games, the longest streak by any player in the Big Ten since Ohio State’s Dennis Hopson 16 in 1987.

Garza is the only Big Ten player to register seven 25-point/10-rebound performances in the same season in more than 17 years. He has produced the two highest point totals in a game by a Big Ten player this season (44 at Michigan; 38 at Indiana).

• ESPN National Player of the Year

• Seth Davis of The Athletic’s National Player of the Year