Chase Daniel fills in, leads Bears to 23-16 win over Lions 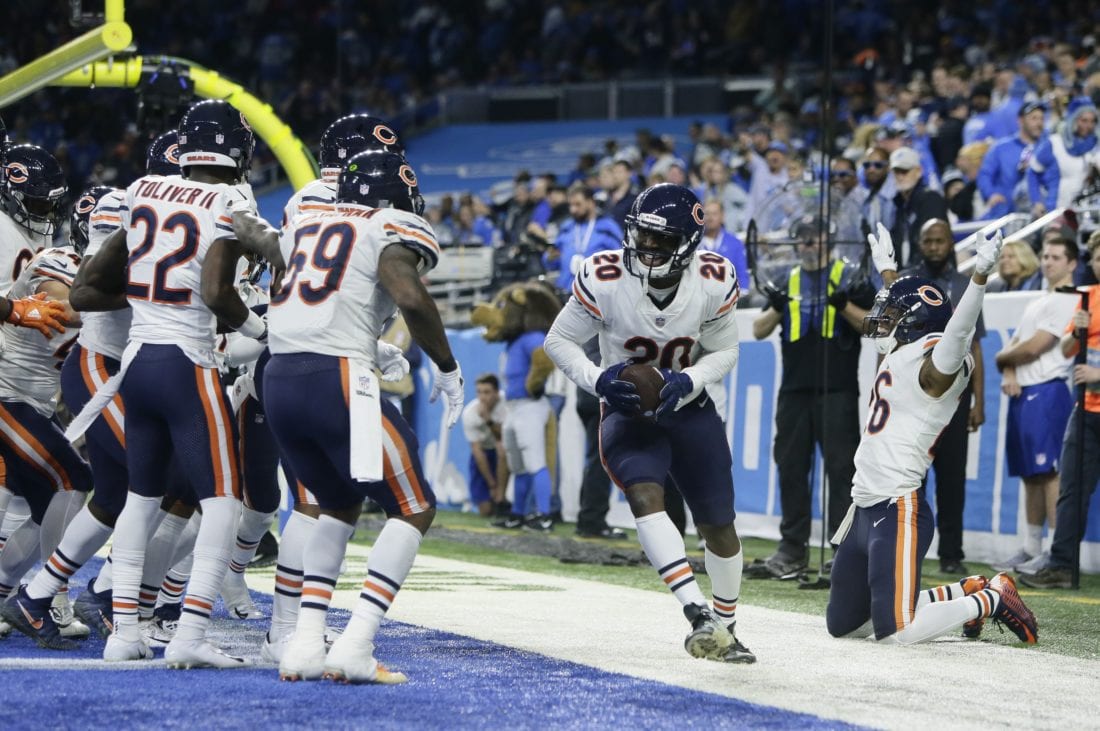 The Chicago Bears celebrate after cornerback Kyle Fuller intercepted a pass in the end zone intended for Detroit Lions tight end Michael Roberts during the second half of an NFL football game, Thursday, Nov. 22, 2018, in Detroit. (AP Photo/Duane Burleson)

DETROIT — Chase Daniel made the most of his chance to fill in for Mitchell Trubisky, having the best day of his journeyman career.

Daniel set career highs with 230 yards passing and two touchdowns to keep the Chicago Bears rolling with a 23-16 win over the Detroit Lions on Thursday.

The NFC North-leading Bears (8-3) sealed their fifth straight victory with Kyle Fuller’s interception in the end zone with a little more than a minute left.

Detroit (4-7) has lost four of five, plummeting to last place in the division.

Chicago broke a 16-16 tie on Eddie Jackson’s 41-yard pick-6 with six minutes remaining. It was Jackson’s second consecutive game with an interception returned for a touchdown. It’s also the fifth career defensive touchdown for the 2017 fourth-round pick.

“That’s the type of defense we play here,” Jackson said. “We are always thinking about putting points on the board. It is about attacking.”

The Lions drove to the Bears 11 on the ensuing drive, but couldn’t score because Matthew Stafford’s pass to Michael Roberts was picked off by Fuller. Fuller’s interception was the 20th of the season for the Bears.

The 32-year-old Daniel made his third career start and his first in nearly four years, replacing Trubisky, who was out with a shoulder injury.

He finished 27 of 37 for 230 yards and two touchdowns, setting career highs in each category. Daniel had a 10-yard touchdown pass to Taquan Mizzell in the second quarter and a 14-yard pass to Tarik Cohen in the fourth.

And unlike Stafford, he didn’t make any costly mistakes.

Detroit became the first team to lead Chicago in a month when LeGarrette Blount ran for his first of two touchdowns early in the second quarter. Blount had 88 yards and the two touchdowns.

The Bears, though, were able to come back and go ahead thanks to their defense.

Bears: RB Benny Cunningham (ankle) left the game in the first half. CB Prince Amukamara was evaluated on the sideline by the team’s medical staff in the second half and returned.