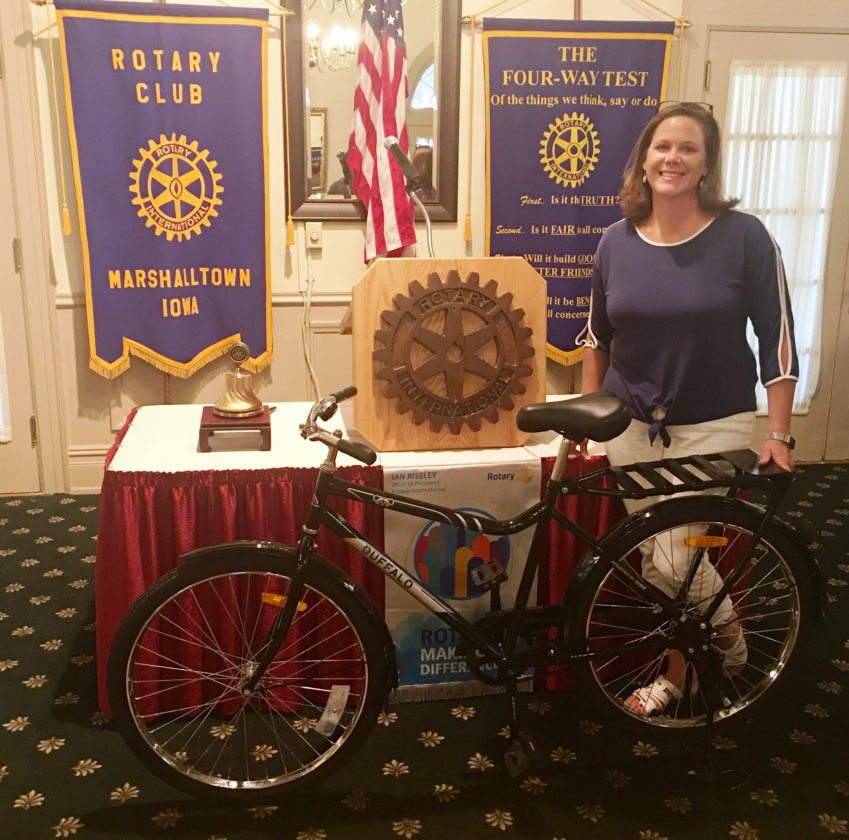 CONTRIBUTED PHOTO Heidi Drager displays a World Bicycle Relief bicycle to a Rotarian crowd at their weekly luncheon. It will be a district project for the Marshalltown Rotary club to provide these utilitarian units in developing countries.

Dennis Drager rang the bell to get the final Rotary meeting of July underway. Guest flutist Krystal Randall joined regular weekly pianist Arlene Selby in performing a summer- time jazz medley. Formalities necessitated a special meeting of the general membership to elect a director to the Marshalltown Rotary Foundation board. Curt Hoff’s nomination by the Marshalltown Rotary Board to serve in this position for his second three-year term was approved.

Sarah Rosenblum introduced her guest Michael Ambrose, co-owner of Iowa Hometown Security. Heidi Drager was also on hand to describe the latest Rotary District 6000 Fundraiser: World Bicycle Relief. A not-for-profit organization based in Chicago, WBR provides heavy duty utilitarian bicycles to people in developing countries. These bicycles help provide students, healthcare workers and entrepreneurs in rural Africa a way to connect with education, healthcare and economic opportunities. The unit cost is only $147 and the District 6000 Governor has agreed to contribute $65 to WBR for each bicycle purchased by a Rotary member within the district.

Jacque Wyant introduced the program speaker, Emily Barske. Barske is a past Student Rotarian and a 2014 graduate of Marshalltown High School. She is serving her second summer internship at the Cedar Rapids Gazette newspaper. She will be a senior at Iowa State University this fall with a double major in journalism and marketing. Barske’s topic was Iowa Ideas, a statewide project of the Gazette that aims to connect Iowans to discover solutions and create a roadmap for the state’s future. Iowa Ideas is a non-partisan, statewide learning program founded on premises substantiated by statistics from the State Data Center of the U.S. Census. Iowa has been characterized by slow, steady growth over the past 29 years, much of it fueled by international immigration. The problems facing the state are largely interconnected and common throughout. Iowa Ideas suggests Iowans must get past areas of divisiveness by hosting and participating in solution-based conversations. To begin implementing the program, Iowa Ideas has spent the last five months holding solution-based conversations focused on local issues across the state in such cities as Des Moines, Sioux City and Cedar Falls. They have also developed a solutions-based magazine that is available at website www.iowaideas.com. Barske described the public conference to be held in Cedar Rapids Sept. 20-22. Eighty sessions, covering a number of specific tracks such as agriculture, higher education and the workplace revolution are planned and will feature a total of 250 speakers. All who are interested in learning about and discussing solutions to aid Iowa in developing a better future are invited and encouraged to attend. Registration cost is $200 until July 31 and $250 thereafter.

As he has done for years, Royal Young announced he has a special treat for the Rotarians as they left the meeting. Young had picked a flatbed full of sweetcorn and made wise use of the shade of Elmwood to help the appreciative Rotarians bag the ears to take home.

Being part of Rotary allows for opportunity to serve and live this year’s international theme: Rotary: Making a Difference.