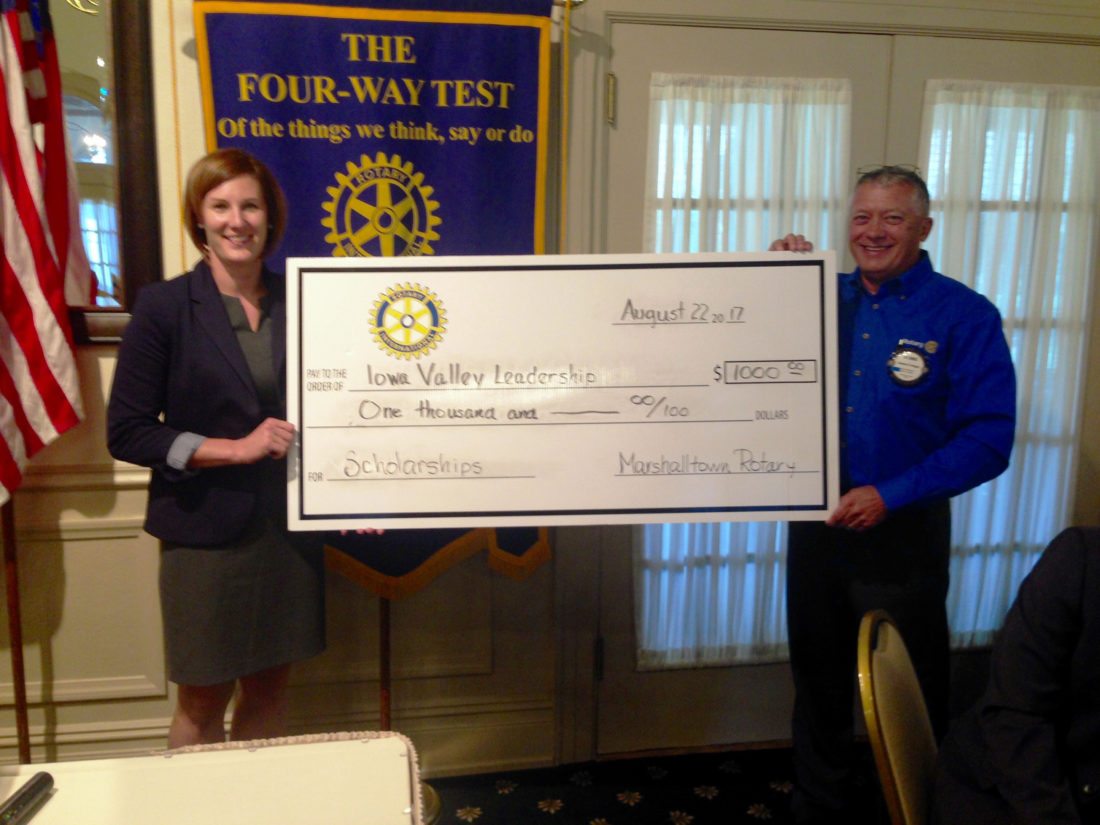 The Aug. 22 lunch meeting of the Marshalltown Rotary got underway at Elmwood Country Club with a prayer and Pledge of Allegiance led by Nancy Steveson. Carol Hibbs introduced guest Lance Horbach and then welcomed Dustin Wright as the newest member of Rotary upon his membership transfer from the Solon club. Lynn Olberding was also on hand to accept the gift of scholarship funds from Rotary for the Iowa Valley Leadership class.

President Dennis Drager read a note of thanks from the House of Compassion and Bill Fitzgerald outlined plans for a work crew to tackle some clean up at the Nicholson Ford Marsh along the Linn Creek Trail. Scott Neff reminded the group the Rural-Urban breakfast, co-sponsored by the Chamber, Marshalltown Rotary Club and Marshall County Farm Bureau, will be held next Wednesday morning at 7 a.m. in lieu of the regular Tuesday meeting. Bill and Todd Casady will be hosting at Central Iowa Farm Store with the breakfast catered by Hy-Vee.

Wright, president of UnityPoint Healthcare-Marshalltown was the featured program. He began his duties in mid-May, coming from the UnityPoint affiliate in Sumner. It has been 100 days since the Central Iowa Healthcare acquisition and he thanks the Marshalltown area for its support. They have begun to lay a foundation and chart a direction. Wright stressed that to be successful, they will need to keep health care local. He highlighted some key appointments: Dr. Adams as the chief medical officer, Dr. Brown heading up family practice and the return of Dr. Van Gundy later in the year in the emergency area. Wright noted the emergency area is a critical priority at present. The bulk of the program was driven by questions that Wright was happy to answer. A common question he receives is the status of the relationship with McFarland Clinic. Wright noted that he is engaged, and meeting regularly, with McFarland leadership, which he describes as a key provider and critical partner. He also responded that we are fortunate to have Center Associates in the mental health space. Happy to have reestablished that relationship, Wright says it is key to having a proactive approach and good communication. When questioned about the north campus facility, Wright said that operations need to be stabilized before that issue is addressed. The Foundation kicked off their first event last week for the new ambulance drive and had more than 100 people in attendance. Wright confirmed that all Foundation dollars will be kept local. When asked about challenges, he cited filling leadership positions as well as the turbulence in hospital finances in general. By the end of Wright’s remarks, it was clear that UnityPoint is working hard to gain the trust of the community to keep patients here.

Rotary’s founder, Paul Harris, believed that serving humanity is “the most worthwhile thing a person can do.” Being a part of Rotary is a great opportunity to make that happen.