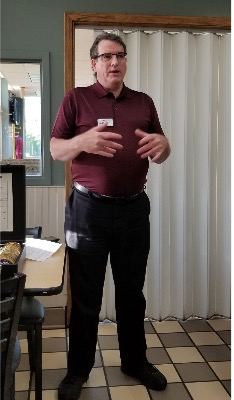 CONTRIBUTED PHOTO Bob Untiedt, Orpheum Theater director in Marshalltown, was the program at a recent Evening Lion’s meeting explaining the goals and schedule of the performing arts center.

The Marshalltown Evening Lions met on Wednesday at the Hy-Vee Deli area in Marshalltown for a regular meeting. After a meet, greet and eat time from 6:30 p.m. until 7 p.m., President Judy Stone called the meeting to order. The club stood and recited the Pledge of Allegiance to the American flag, sang “My Country Tis of Thee” and then a prayer was led by Bob Johnson.

The program that evening was Bob Untiedt, Orpheum Theater director, who brought a handout explaining the many activities of the Orpheum Theater. Untiedt explained the monthly movies, Live After 5 concerts and other community performing arts that include showcasing creative arts and cultural performances, including music, dance and poetry. He told us about the Orpheum’s focus areas or goals of partnering with local businesses, showcasing other cultures through performing arts, and getting the word out for their many events with an emphasis on reaching older Iowans. Untiedt also shared the web site: www.orpheumcenter.com as a great way to become informed about the goals and activities of the Orpheum Theater.

In other club business, the club received $100 from friends and family of the late Stan Rebik, a long-time active member. The Evening Lion’s Board of Directors will later decide how to best use this money, possibly with other money to use it towards one of Rebik’s favorite Lion’s projects.

Three Marshalltown High School Lion’s Scholarship winners have been chosen from the many applicants and those winners and their families will be invited to the next meeting, June 5 at Smokin G’s restaurant in downtown Marshalltown.

During the fun part of the meeting, Tailtwister Elaine Peterson fined Brad Braga, Dan Roberts and Sandy Thomae for being tardy and conducted a Month of May trivia contest which resulted in many fines for not coming up with correct answers.

Keith Noack was charged to bring the Lion’s mascots back to the next meeting and Thomae was picked to bring a door prize to be won at the June 5 meeting. The Tailtwister drew her own name to win May’s door prize of a variety of snack food.

Anyone interested in visiting the club and perhaps helping with its worthwhile projects can contact Tim Fienup at 641-485-9942 or at tfienup@gmail.com.