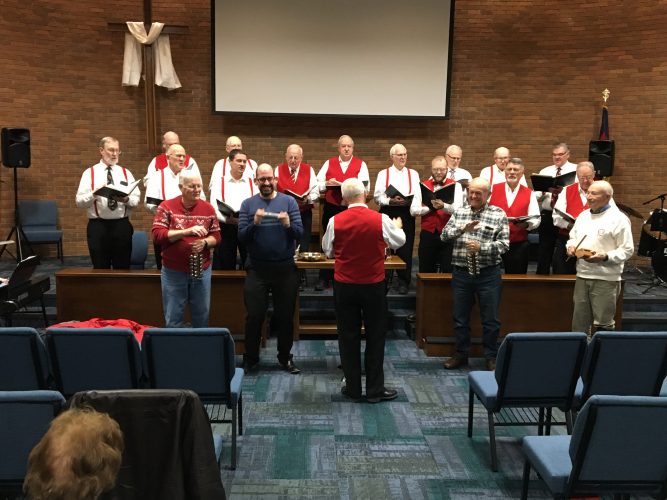 Matins Kiwanis were treated to a fun performance by the Marshalltown Men’s Choir. The choir also performed at the Veterans Home and The Embers on Sunday.

The Marshalltown Federation of Women’s Clubs Board was hosted in the home of president David Giese and his wife, Mary. Members were treated to a brunch following the board meeting at 9 a.m. on Dec. 11. Cynthia Mansager, Sandy Short and Deb Mason were welcomed as new board members. The ...

The Marshall County Retired School Personnel Association met Dec. 16 at the Fisher Community Center. The program was The Big House and was presented by Grace Church pastor Brent Thiessen and Dave Kester. The house was purchased by the church and is located at 110 N. Second St. Some teachers ...

The American Legion Auxiliary Post 46 hosted an appreciation dinner for the Combined Honor Guard, on Dec. 3 at the Post Home. The members of the Honor Guard provide final respects and honors for veterans and their families during all weather conditions including: heat, wind, cold, snow or even ... 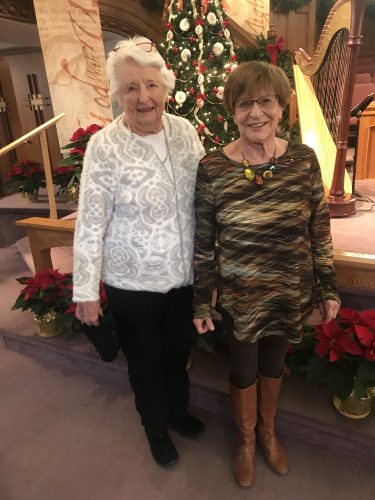 P.E.O. Reciprocity with combined chapters gathered for a musical Christmas program in which Tuesday Musical presented “Expressing Christmas.” P.E.O. membership milestones were recognized during the program. Pictured are Elenor Tjossem, a 70-year member from Chapter JU and Julie Squiers, a ...

Joe Carter had some encouraging words about growth during his remarks to the Marshalltown Rotary club. The product catalog for the Marshalltown Company has grown from 16 pages to 340 pages in the last few decades. In addition to this organic growth, the company wrapped up three acquisitions ...

Each year on the second Saturday of December, is National Wreaths Across America Day. This year’s motto was “Remember, Honor and Teach.” From the Revolutionary War to present day conflicts, veterans are devoted sons and daughters, fathers and mothers, sisters and brothers. They come ... 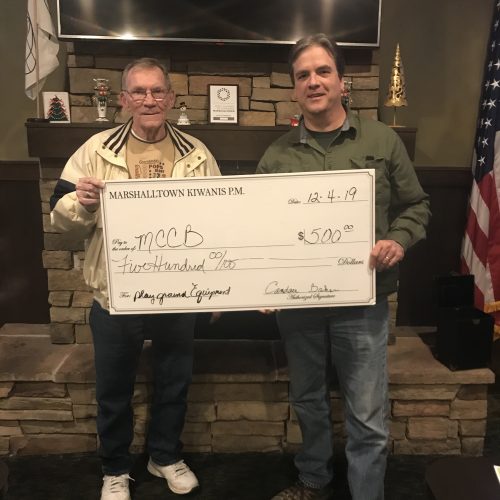 Kiwanis P.M. President Kenny Lamb, left, presents a check for $500 to Mike Stegmann for the Marshall County Conservation Board to use toward the playground equipment at Grammar Grove Park. They are hoping to raise funds toward the equipment so it can be installed in the upcoming year. The money ...

Community supper was a huge success

LAUREL — On Nov. 20, The Harold McBroom American Legion Auxiliary #635 met at the Post Home with Vice President LaDonna Runner calling the meeting to order in forum. There were seven members present and one guest. The Chaplain opened the meeting in prayer. Members stood and recited the ...

Chapter DA of the National TTT Society held its December meeting and Holiday party at Glenwood Place on Dec. 3. Members enjoyed a lunch provided by Glenwood Place. Members were gifted with a Personalized Christmas Ornament, decoration and peanut brittle provided by Erma Meyer and Sharon ...

Caralee Hutchens, president of Sigma Master Chapter, thanked Anne Fiscus for hosting the Christmas luncheon at Glenwood Place on Dec. 10 with 12 members present, two guests and six members absent. Tables were decorated with Walnut Christmas cutouts, one for each made by Hutchens. Joyce ...

A vision of growth for Marshalltown

It was good to see Arlene Selby back in the saddle at the piano for the Dec. 10 Rotary luncheon. Jerry Stephens announced more than 700 winter coats will be delivered to kids during the week as part Rotary’s Operation Warm program. President Jim Goodman presented a donation to support the ...

The Marshall County Retired School Personnel Association will meet at 1 p.m. on Dec. 16 at the Fisher Community Center, 709 S. Center St. There will be a brief business meeting, a program and a time for refreshments. Donna Appel will provide a program on “The Big House.” All members are ... 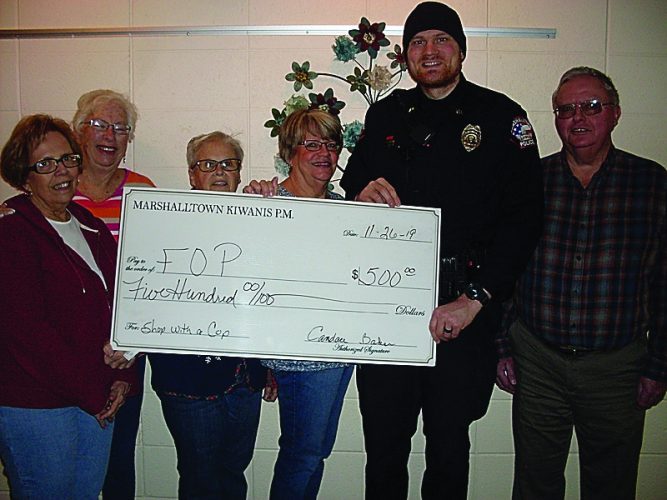 The Fraternal Order of Police which oversees Shop with a COP among other events received a check for $500 from the Kiwanis P.M. club. Pictured representing the Kiwanis P.M. are: Peggy Lamb, Ann Kent, Candy Baker, Martha Edgeton, Officer Paul Heitman and Gary Mason, president of Kiwanis P.M.

CONRAD — Conrad American Legion Auxiliary Unit #681 met at 1:30 p.m. on Nov. 25 at the Conrad Legion Hall. The meeting was called to order by President Sue Kitzman with 10 members and officers present. The Unit recited the Pledge of Allegiance. Chaplain Mary Ann Miller led the group in prayer ...

The first Sunday in December is designated as “Elks Memorial Day.” This is a day aside for the Benevolent and Protective Order of Elks all across America to hold a program to honor those members who have passed before us. It is a day of remembrance that we as Elk, hold very dear to our ... 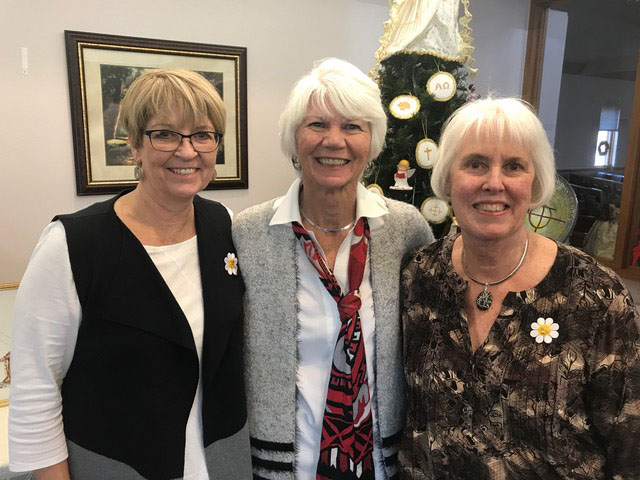 Mary Stevens, center, was initiated into the P.E.O. Sisterhood Chapter NU on Dec. 2. Pictured with Stevens are sponsors Jackie Mason, left and Gail Reese. Sponsor Mary Douds was unable to attend. Besides initiation, a regular business meeting was conducted and program given on P.E.O. Bed and ... 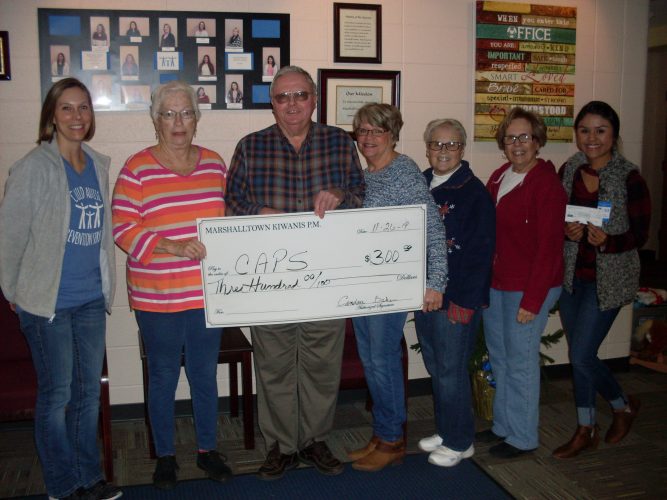 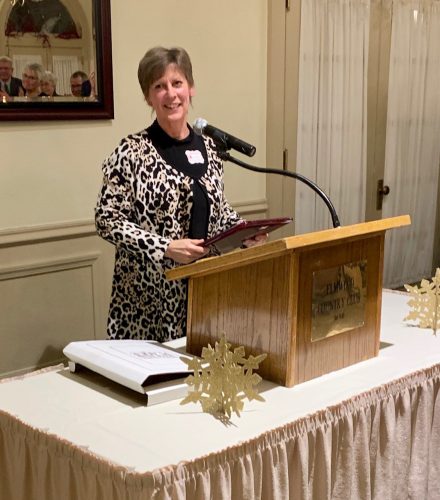 Carol Hibbs is the recipient of the 2019 Kenneth Brintnall Award, the highest Rotary honor bestowed on a member of the Marshalltown club. A recognized leader and advocate, Hibbs exemplifies the club’s motto of “Service Above Self” to the Marshalltown Rotary Club and community.