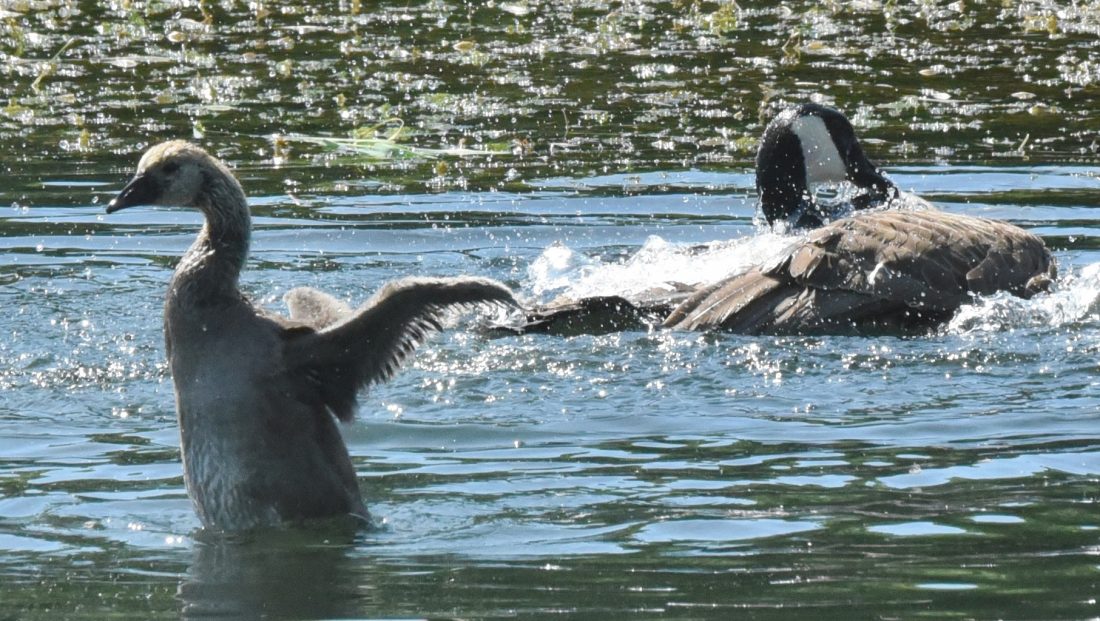 PHOTOS BY GARRY BRANDENBURG Last weekends weather was HOT. Birds were stressed, both young and mature. So how do they cool off? One way was for this young of the year robin spreading its wings to allow as much warm body heat to escape by not having its wings folded against its body. And for the young Canada goose, being a waterbird has advantages. Swimming in the water allows for quick dips to completely immerse, then surface and beat the air with outstretched wings. What looks so funny is how even this gosling’s tiny wings can assist with body cooling efforts.

WINGS are a bird thing. These unique appendages with special feather shapes allow a bird to fly through air. Wings beating against the air both provide lift and forward propulsion at the same time. Controlling the wing shape provides many adjustments to in flight needs or on the ground/water.

When really hot air temperatures occur, as in last weekend, birds found the discomfort level a problem. Just like people who had to adapt, it was not an unsolvable problem. All adapt to each warm day in many different ways. For this young robin, it figured out that spreading its wings brought a bit of relief, temporary as it might have been. Perching within shaded tree limbs and branches helped. Air currents and breezes blowing is an easy thing for birds to make the most of.

Water, for ducks and geese and other water birds, is a cooling agent. While I was conducting a hike around the shoreline of Green Castle Lake during the early morning hours last weekend, before the air had heated up, I observed many Canada geese fully enjoying the habitat. While swimming in the lake, these birds both adults and young were dipping and diving, surfacing with great bravado as wings beat the air to shed surplus water. Back and forth this goose behavior seemed infectious as all tried to outdo each other in lake bathing techniques. Lots of splashing water was in the air.

What did catch my attention for which I was able to capture with a photo, was a young Canada goose using its tiny wings to mimic what the adults were doing. This youngster is learning. I found it a bit comical that those tiny wings at this time are almost useless. This did not prevent the gosling from going through the motions of wing flapping away excess water. If it works to help cool off, then it works. Just keep doing it.

Another point of information regarding young geese is the differential growth rates of their bodies and appendages. Mother Nature has a plan for young birds newly hatched from an oval egg. Give the little critter what it needs initially to get started in life. Add warmth and dryness from its parents. For some birds like waterfowl, biologists use the term Precocial to help define the ability of the young bird to cope with life outside the eggshell. Precocial refers to those covered with fluffy down feathers, eyes open and able to walk almost immediately. They can be out of the nest on day two and from that time onward, follow the parent birds either on land or water. Feeding on bugs and bits of plant matter comes instinctively as long as the parents take them to all places where food can be found.

Wings on waterfowl are tiny and initially useless. The body itself puts on bulk while fluffy down continues for several weeks. No body feathers yet. Legs grow more quickly in length along with foot size. With these appendages in good shape, walking becomes easier. Swimming and fast escapes on land or water are more easily accomplished if a predator attacks. Later this summer, those tiny wings, whose growth was not in proportion to the rest of the body, now get more equal treatment. The body can afford to direct more energy to develop wing bones into longer elements. Little pin feathers will appear on the wings (as today’s image shows) as flight feather growth begins. It will take a month or more, but those wings will get longer, become fully feathered and definitely take on the shape and utility of what will allow flight later this fall. The bodies of waterfowl young will transform from fluffy down to feathers. It makes for the ‘ugly ducking’ stage of life.

BANDING CANADA GEESE by Iowa Department of Natural Resources biologists and wildlife managers still takes place. The Otter Creek Wildlife Unit gets an allocated 200 bands for its region. Banding may take place at any waterbody such as Union Grove, City of Grinnell lake or Green Castle Recreation Area. It does not take long to run out of leg bands for geese. So there is not a set area for banding. Banding involves herding geese during late June onto a water body, then setting net corridors on shore. Boats in the lake try to get the geese to go onshore near the net leads. If a leader goose thinks the escape route will work, all the other geese will follow like sheep going to the barn. Hint: It is easier said than done. But every year a new class of geese gets aluminum leg bands to wear. Young goose legs in June are nearly adult size and able to hold the bands.

IOWA RIVER levels are like a yo-yo, up and down, all in response to rainfall events. And central Iowa has had plenty of rainfall lately to test river response times. May 30 the river topped out at about 17.81 feet. Then a week later it had dropped to the 13 foot stage. Forecasts for this week showed a predicted crest in the 16 foot arena. Time will tell how accurate that will be. Lake Marshalltown got a new surge of water as can be seen west of Highway 14 on the north side of town. Rains from June 9-10 added about three inches of water from frequent and intense squalls.

Fact: One inch of rain per acre equals 27,154 gallons of water. It is truly amazing how much water in the form of water vapor (clouds) can be held aloft, transported over thousands of miles and then dumped on landscapes far away from the oceans where it evaporated from.

A GRAY PARTRIDGE was a recent bird sighting for this author. It was a single bird crossing the road. Its rusty red top tail feathers were clue number one. It fast flight pattern was clue number two. This bird is a hardy critter. Hunters have a difficult time each fall putting any of these game birds in the bag. But it can be done. It was good to see this game bird again.

Words of wisdom: What refutes science? Answer, better science. What doesn’t refute science? Your feelings, your religion, your favorite politician or your half-baked opinion after watching too many Youtube videos.

Garry Brandenburg is the retired director of the Marshall County Conservation Board. He is a gradute of Iowa State University with a BS degree in Fish & Wildlife Biology.

PHOTOS BY GARRY BRANDENBURG Last weekends weather was HOT. Birds were stressed, both young and mature. So how do they cool off? One way was for this young of the year robin spreading its wings to allow as much warm body heat to escape by not having its wings folded against its body. And for the young Canada goose, being a waterbird has advantages. Swimming in the water allows for quick dips to completely immerse, then surface and beat the air with outstretched wings. What looks so funny is how even this gosling’s tiny wings can assist with body cooling efforts. 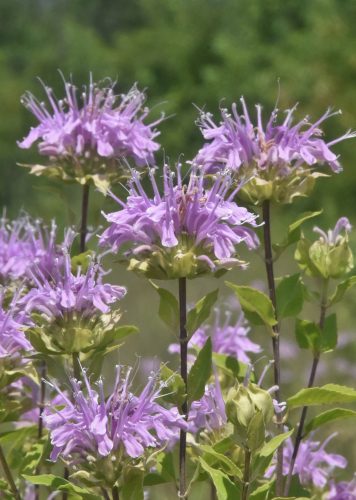 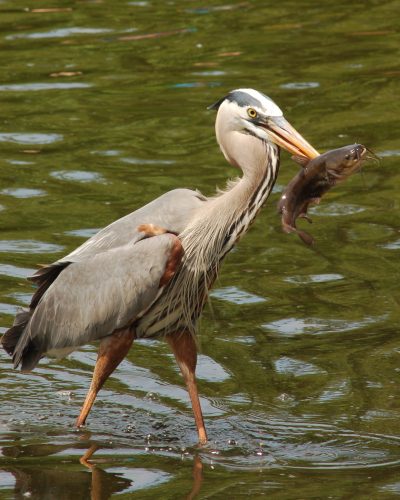