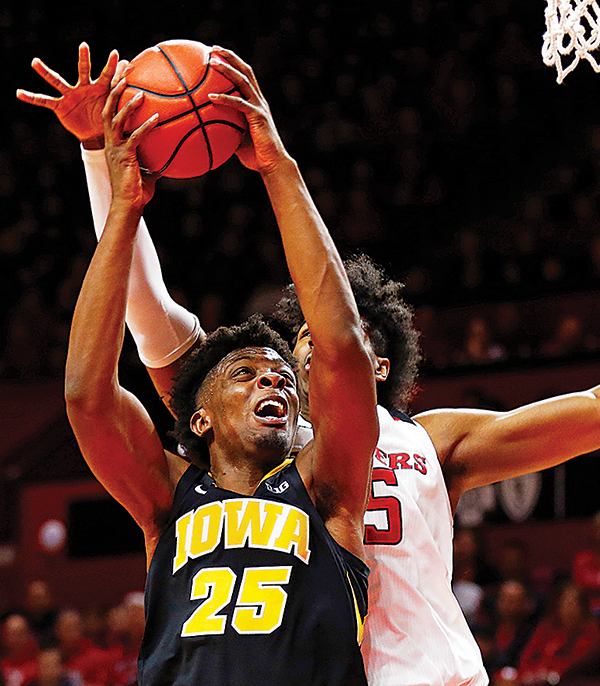 AP FILE PHOTO - Iowa forward Tyler Cook (25) drives to the basket during the second half of a college basketball game against Rutgers on Feb. 16 in Piscataway, N.J.

ROSEMONT, Ill. — The University of Iowa had four players represented on the Big Ten All-Conference teams, the league announced Monday.

Cook ranks third in the league in free throws attempted per game at 6.41, sixth in rebounding with 8.1 boards per game, ninth in field goal percentage at 53.4 percent and he is tied for 11th in scoring at 15 points per game. He is the one of two players in the Big Ten this season to average at least 15 points and eight rebounds per game. Cook is one of only nine players in program history to total more than 1,200 points and 600 rebounds in his career.

Bohannon ranks first in the conference in free throw accuracy at 87.7 percent, fourth in 3-pointers made per game at 3.4 and assist-to-turnover ratio at 2.1, and tied for sixth in assists per game at 3.4. For the second-straight year, Bohannon led the conference in free-throw percentage during conference play. He only missed seven free throws in 20 Big Ten games, going 64-for-71 at the charity stripe. He also leads the Hawkeyes with 73 three pointers on the year and his career total of 258 threes is four shy of tying Jeff Horner for the most in program history.

Wieskamp became the eighth Hawkeye to be voted to the all-Big Ten freshman team since 2007 and the sixth under head coach Fran McCaffery. Both Bohannon and Cook were the last to make the all-freshman team in 2017. Wieskamp ranks third in the conference in 3-point accuracy at 43.1 percent and he is second all-time among Iowa freshmen behind Jake Kelly. He was twice named the Big Ten Freshman of the Week this season.

On top of the other honors, redshirt-senior Nicholas Baer was named as a Big Ten Sportsmanship Award honoree.